MRS attendees share who and what inspired them to become scientists.

Stafford Sheehan of Air Company discusses his work at Air Company, which has commercialized several luxury products (spirits, sanitizer, and fragrance) that use ethanol made by chemically reducing CO2 using H2O, and renewable electricity. Dr. Sheehan is the recipient of the 2021 MRS Nelson "Buck" Robinson Science and Technology Award for Renewable Energy.

MRS TV talks with Kalpana Katti and Rebecca Anthony about the “Broadening Participation in the Materials Community” event, which featurekd a panel discussion about the newly-launched MRS Diversifying Materials Special Interest Groups (SIGs), followed by the opportunity to connect and engage with peers during breakout time. Listen to the interview and see the blog post.

Cementing a Low-Carbon Future Infrastructure – 2021 Kavli Early Career Lectureship in Materials Science. The large amounts of cement and concrete needed to fulfil modern infrastructure needs make them contribute up to 10% of CO2 global emissions. Susan Bernal Lopez, University of Leeds, discusses her MRS Fall Meeting Kavli Early Career Lecture which provides an overview of recent advances in the materials science of novel low carbon cement, with a fraction of the CO2, highlighting the challenges and opportunities for their development and industrial widespread uptake.

Yury Gogotsi of Drexel University discusses his MRS Medal Award-winning work in advancing the understanding of processing, structure, and properties of two-dimensional carbides and nitrides (MXenes) for energy storage applications. 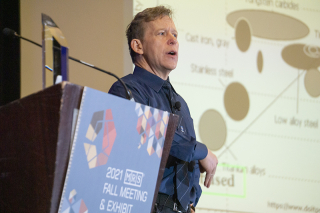 Nicholas A. Kotov, University of Michigan

The Turnbull Lectureship recognizes someone who has contributed to the fundamental understanding of the science of materials. True to that spirit, Nicholas Kotov’s work has laid the foundation for a deeper understanding of the biomimetic self-assembly of nanoparticles. “It’s my job to tell you what biomimetic structures are, why they are important, and what difference in the world these structures make,” he said during his Turnbull award speech.

Nature is rife with complex nanostructures composed of nanoparticles that self-assemble due to varying anisotropies. Nacre and bone are prime examples, where layered organization of nanocomponents results in “wonderful mechanical, optical and transport properties,” he said. “The question of course is how do we replicate this?”

He and his colleagues have replicated the brick-and-mortar structure of nacre, for instance, by assembling various materials such as graphene and cellulose in a layer-by-layer manner. This has given materials with combinations of properties such as electrical and thermal conductivity that were previously unseen, and the technological applications for such materials.

Two key things drive the assembly of complex structures, he said. One is dispersity, which is a measure of the diversity of particle sizes, and the other is competing chirality-dependent assembly restrictions. 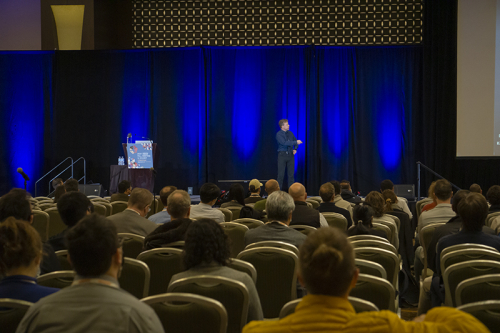 His group has shown that inorganic nanoparticles with polydispersity, (i.e., non-uniform size distributions,) self-assemble into uniformly sized super-particles via a process driven by the tension between electrostatic repulsion and van der Waals attraction.

Chirality plays a key role in interparticle interactions which lead to self-assembly. The researchers assembled anisotropic iron diselenide nanoplatelets into spiky spheres, which they call hedgehog particles. By changing the chiral fraction of cysteine, they controlled the assembly of gold–cysteine nanoplatelets into visually complex hedgehog particles with twisted spikes. Utilizing electrostatic restrictions lets them form a wide range of chiral particles such as bowties, star-shaped, or a super-particle of super-particles.

Kotov has used graph theory to measure the complexity of the self-assembled nanoparticles, and found that they are more complex than “biological materials forged in nature,” he said. “We started to replicate strength but then took it further.”

His group is now using graph theory methods to understand where complexity comes from, and use the complexity measure to design desired particles with the aid of machine learning techniques. “Complexity emerges from the competition of restrictions, mainly electrostatic and symmetry restrictions,” he said. “If they have to fight each other that makes the system choose complex pathways to satisfy all the restrictions.”

Nicholas Kotov of the University of Michigan received the 2021 David Turnbull Lectureship for "foundational discoveries in interface-based engineering of self-organizing materials."

The David Turnbull Lectureship recognizes the career contribution of a scientist to fundamental understanding of the science of materials through experimental and/or theoretical research. In the spirit of the life work of David Turnbull, writing and lecturing also can be factors in the selection process.

Emily Carter of the University of California, Los Angeles discusses her MRS Materials Theory Award talk on "Quantum-Derived Materials Solutions for a Sustainable Future." Prof. Carter has been presented with this award for "advances in quantum mechanics theory with broad applications to materials and chemical sciences."

Sustainability in the lab

MRS attendees share how sustainability factors into their work.