Along with synthesis and preparation of metal oxide incorporating materials comes defects and dislocations. In this regard the grain boundaries in these metal oxides tend to significantly affect the final mechanical response. The major concern is their weak presence in the bulk, which causes deformations/fractures. The influence is observed in bulk polycrystalline measurements and poses difficulty in assessing individual contributions. Shen Dillion has done single interface measurements at a small scale using the technique of in situ TEM. This contributed in determining the fracture energies from real interfaces in the polycrystals and answers the characterization of interface mechanics. Dillon specially focused on the factors of grain boundary sliding and grain rotation inversing the stress response (Hall-Petch strengthening) in such materials.

Pierre-Olivier Chapuis covered the use of scanning thermal microscopy, which is based on the concept of atomic force microscopy but with heat. This technique has applications at micro- and nanoscale levels of samples where the researchers can characterize local thermal conductivity, local melting temperature, and local heating in ICS, for example. Some other uses of this technique include nano-lithography and data storage. This technique competes with other optical methods and has a shortcoming when the sample roughness is too high. Chapuis showed that in their laboratory, SThM is used under varying environments that include vacuum, a homemade SEM system, and a homemade cryo cooled sample. Chapuis discussed the sensitivities of a microprobe and a nanoprobe with varying materials and emphasized the need for proper calibration. He showed that as of now, thinner samples had a higher error bar while thicker samples had very precise measurements. He emphasized that SThM makes measurements in the cross plane direction while most other techniques only do it in the in-plane direction of the sample. The final dream of this project is to be able to take precise thermal conductivity measurements with no contact under vacuum. From theoretical calculations the researchers compute a flux between probe and sample that gives a spatial resolution for non-contact SThM to be approximately 10 nm.

Hyejeong Lee works with Ji Young Jo on using variations of PEDOT:PSS for thermoelectric applications. Lee addressed how conducting polymers are a good choice for wearable thermoelectric devices like thermoelectric generators (TEG). She said PEDOT:PSS is one of the highest conductivity polymers but that it still suffers from low thermoelectric efficiencies compared to their inorganic counterparts. The researchers fabricated PEDOT:PSS nanotubes in a template for enhanced thermoelectric efficiencies. They saw an increase in electrical conductivity due to the stretching of PEDOT chains as well as the decrease in thermal conductivity through phonon scattering in these nanotubes made in their laboratory. They achieved better efficiencies by adding post processing treatments and adding a solvent to these thin films. Lee concluded her talk by explaining to the audience why heading toward low-dimensional nanotubes is an interesting path forward for these materials. 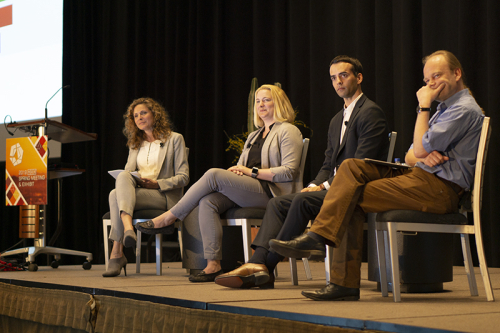 Moderator: Elizabeth A. Kócs, University of Illinois at Chicago

Population growth intrinsically strains resources supporting human life. The glocal (global and local) nature of today’s communities, combined with population growth, causes sustainability issues. Two separate paradigms have been advocated to assist sustainability goals: Materials for Sustainable Development (e.g., photovoltaics) and more recently Sustainable Development of Materials—a broader approach that promotes materials based on both application as well as sustainability. Despite the recognition of sustainability, waste management has been historically underappreciated, with most of the efforts contained in a linear system that either incinerates the final product or disposes it to landfills.

A panel discussion was organized around sustainability and waste management on Tuesday evening. It was argued that zero waste is a lofty goal, and the end effects may not be apparent immediately. Zero waste is difficult to achieve through waste management, and attention should be focused on waste prevention. Ensuring zero waste is a tricky balance due to a variety of often negatively correlated factors such as the interconnected nature of a zero waste economy, technological as well as policy challenges, the participation of producer and consumer, and different local standards to name a few. Additional ambiguity arises from the fact that zero waste is not consistently defined. For example, San Francisco, California enforces participation in recycling, in contrast to Phoenix, Arizona where it is voluntary. Circular economy, where materials are designed to be reutilized at the end of product life, creates problems as well, especially when a material is banned, and it needs to be phased out from all the phases of the circular economy. 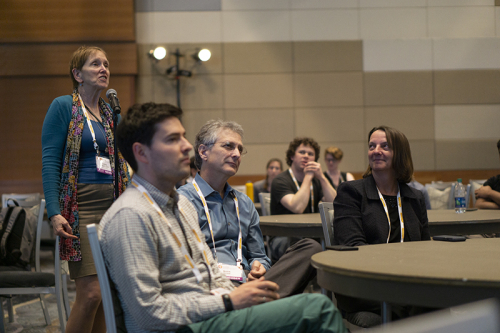 The panelists agreed to a need for lucrative incentives to pursue recycling. Many times, rearranging the process sequence itself can be an effective incentive, for example, a large fraction of recycling cost is attributed to processing—sorting out different waste types, and it is economically more feasible to incentivize consumers to categorize trash than handling it at a recycling plant. This cost of sorting waste often decides whether recycling can be pursued and, in the presence of unacceptable overheads, incinerators or landfills are preferred. 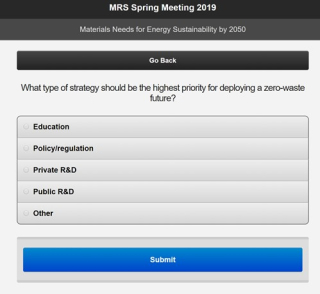 A unique aspect of this panel discussion was the interactive participation of the audience in the form of audience polling. It was argued that good policies go a long way in realizing the zero waste future. Good policies are to be built upon scientific rationale and statistical data, both of which require active participation from scientists and engineers.

Due to the natural occurrence of calcium phosphate in bones and teeth, nanoparticles based on calcium phosphate are being considered as a biocompatible option for drug delivery applications to carry cargo molecules like DNA, RNA, and proteins. In his talk, Sebastian Kollenda presented his recent results on therapeutic applications based on these nanoparticles in treatment of inflammation and derived carcinogenesis, vaccination against retroviral infections, as well as viral clearance. Moreover, the main goal was to monitor intracellular pathways and ejection from the body for such therapeutic nanoparticles. The particles have aspherical morphology, and were monodispersed with a typical diameter of 50–150 nm. Time-resolved CLSM demonstrated successful endocytosis of the particles loaded with protein into the cell which was found to be highly dependent on the localized pH values. Thus, a smart tool was designed by using a pH-responsive biosensor to efficiently visualize the intracellular pathways.

Organic thermoelectric materials are gaining traction for use as the power source for flexible wearable devices. Xavier Crispin talks about two kinds of thermoelectric charge carriers: hole and ion. His research group looks at both the electronic and ionic thermoelectric properties of these materials. Crispin showed how the time evolution of the thermo voltage between a pure hole transport, a pure ion transport, and then a mixed transport conductor is different with the mixed having the highest voltages. Ionic thermoelectric energy storage systems can be used such that it charges during the day due to a variation in temperature while it discharges in the night providing electricity. Polymer electrolytes that conduct ions have high Seebeck coefficients which makes them an ideal candidate for use in supercapacitors. However, these ionic polymer electrolytes are easily affected by humidity. Crispin’s group did a series of experiments to understand this humidity-dependence.

Interactions of liquid drops and solid surfaces have been a classical problem in transport phenomena and extensively studied in various contexts such as heat, momentum, and mass exchanges. Depending on the application, one would want to either enhance the effective transport, for example, faster condensation on a colder solid (going from film-wise to drop-wise condensation) or attenuate the intrinsic characteristics of the solid–liquid pair, for example, icing of impacting drops on aircraft wings is detrimental and in turn reduced heat transfer is desired. The former problem of enhanced transport has received considerably more attention than the latter.

Henri-Louis Girard’s research focuses on the problem of attenuating the aforementioned transport modes. From a simplistic understanding, one could argue that liquid-repelling (e.g., hydrophobic for water-repelling) surfaces should provide reduced transport interactions. However, upon a closer look, Girard found that even if the hydrophobic surfaces do not let drops stick to the surface, the impact, oscillations, and rebound transients provide a thorough contact between the sold and flattened drop shape during the oscillation stage. In other words, both time of contact, as well as area of contact, contribute to effective transport. For a hydrophobic surface, the time of contact is smaller, but the contact area is fairly high which jointly leads to not so small interactions. Building upon this interpretation, the research group hypothesized that if the surface has circular ridges, the contact area can be reduced. Further experiments with varying circular ridge dimensions revealed three interaction regimes: (i) when the radius of the ring is smaller than that of the drop, upon drop impact it spreads over the ring and the ring cannot divert the momentum during spreading; (ii) when the radius of the ring is fairly higher than that of the drop (greater than three times), the effectiveness reduces as it does not divert the drop contact early on; and (iii) in between these two regimes, there is an interesting regime where the usefulness of the circular ridges deteriorates with an increase in their radii. At present, the researchers are analyzing the implications of an offset impact of the drop with such ridges in terms of momentum diversion and consequent attenuated transport interactions.

The 2019 MRS Mid-Career Researcher Award is presented to Hongyou Fan, “for outstanding contributions in nanoparticle self-assembly of functional nanomaterials and for leadership within the materials community".

User Facilities for X-Ray and Neutron Absorption Spectroscopy - A survey of analyzing material properties when other syntheses don’t provide results!

Researchers are encouraged to pursue PDF studies if they have already modeled many material parameters possible while in reciprocal space, and if they suspect local material structure may differ from the long-range structure. Evidence of a distinct local structure may be available if one finds signatures of disorder through complementary methods, or if an average structure model fails to explain observed material properties.

The user facilities for such nanoscale science research centers are as follows: 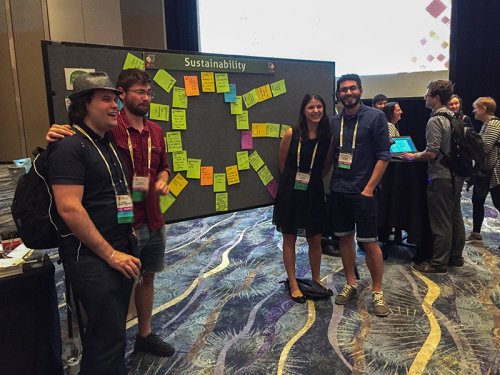 This 2019 MRS Spring Meeting featured a grandiose reception for attendees, concerning what would be the new topical areas of interest for future scientific meetings. While some seminal works in Quantum Information Technologies, Artificial Intelligence, Biomaterials (for example), and Materials for Sustainability have driven pop science intrigue, there is no doubt as to their research prominence, application, and concern for implementation based on where strategic materials advances could bring these fields into a more palatable reality. 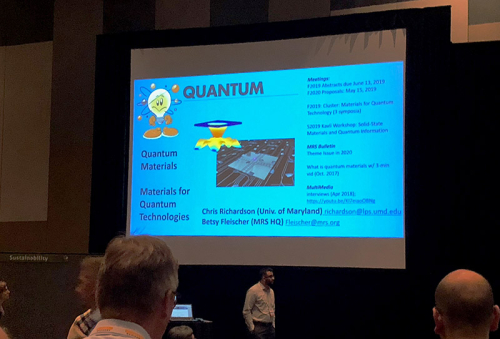 The networking reception itself was a very successful addition to the Meeting, collecting feedback and constructing working groups for where these topical areas are poised to inspire research presentations and publications, as well as secure collaborations for new research initiatives, grant applications, and establishing benchmarks for funding priorities. 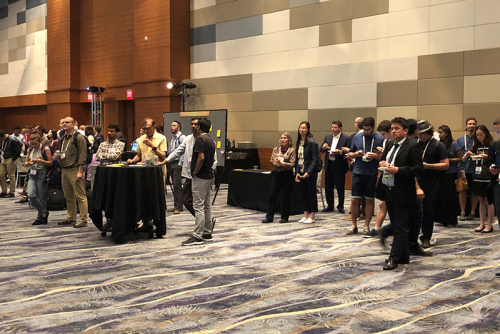 MRS, from grassroots initiatives of supporting higher level lobbying for initiatives pertinent to materials researchers, features political proceeds newsletters and the Materials Voice - a support feature for US constituents to e-mail their congressional representatives about specific policy concerns that are of vital importance to the materials research community. MRS, with the addition of other professional scientific organizations, features the National Photonics Initiative and National Quantum Initiative as a means for researchers to follow, at high level, the impending frontiers of research.