Challenges in the Realization of Perovskite/Si Tandem Solar Cells

Silicon-based solar cells have much higher efficiency when combined with other top cells having much wider bandgap, referred to as tandem solar cell design. Increasing the number of junctions (cells) increases the efficiency beyond 30 percent. However, the efficiency does not increase indefinitely as 6-junction devices were found to have comparable efficiency as the three-junction devices. This results from the extra complexity associated with the increase in number of top cells. These cells can be interconnected via different designs most notable of which is a 2-terminal tandem design. Stephanie Essig showed how the solar cell efficiency could also be increased via the 3-terminal and 4-terminal tandem designs. A 4-terminal GaInP/Si 2-junction tandem device had efficiency improved to beyond 30 percent. Essig demonstrated also that the challenges associated with the 3- and 4-terminal designs can be overcome by having an optimal voltage ratio between the top and bottom cells.

Ionic diffusion in layer lattices is a critical mechanism for controlling the electronic and magnetic properties of a system. The intercalation for two-dimensional (2D)-layered systems can be executed using the solid phase diffusion, vapor phase method and wet chemical method for applications such as electrochemical energy storage, 2D materials fabrication, and property tuning via the doping effect. In terms of magnetism, an intercalation technique where an extra element is inserted between the van der Waals (vdW) planes of 2D transition metal dichalcogenide (TMD) has not been actively explored. Whan Kyun Kim outlines a two-step intercalation reaction where lithium and cobalt ions intercalate TMD using the wet chemical method. Kim showed that the MoTe2 intercalated with Co involves the insertion of Co between the vdW layers of 2H-MoTe2 led to a phase transition to 1T´-MoTe2 after the Li-intercalation. We learned that Kim's intercalation reaction obtained a 2D material with ferromagnetic ordering. This study can serve as an active fabrication technique for acquiring improved 2D TMD-based spintronic systems.

Artificial intelligence (AI) has been very instrumental in the search for new materials having properties meeting different application requirements. Conventionally used models employ atoms and chemical bonds as materials descriptors, which cannot be readily extended to complex materials structures such as composites. Composite materials structures involve highly complex interactions between the fillers and matrix resulting from such phenomena as crosslinking, phase separation, and filler orientation amongst others. Shun Muroga introduced a multimodal AI model that integrates conventional AI with other materials descriptors such as the physical and chemical structure. Muroga studied over 80 polymer matrix composites from five matrices, two additives, and three fillers all with different volume fractions. The materials were characterized using optical microscopy, infrared spectroscopy, and Raman spectroscopy and the results fed into the AI model. The model was able to self-generate characterization data and predict the properties of over 100,000 composite materials conditions after the training process. This demonstrates how the multimodal AI approach efficiently accounts for the interplay of complex interactions in composite materials, rendering it more effective at materials prediction than the conventional models.

The search for application-tailored thermoelectric materials often requires collaborations between experimentalists and computationalists. Eric Toberer points out that for these collaborations to be more fruitful, a deeper understanding of defect phyics is required to calculate native defect energetics and concentrations prior to experiments. This enables more productive efforts at predicting suitable compounds with desired properties. The considerations space in theoretical defect calculations exceed those of experiments. Experiments are mostly limited to nominal stoichiometry and processing parameters, whereas theory considers bandgaps, band masses, and elemental chemical potentials amongst others. This results in scenarios in which expected phase diagrams may differ between the two approaches. Toberer asserts the importance of ensuring not necessarily perfect agreement between the two approaches but rather close enough agreement within the same order of magnitude. This ensures that predicted defect concentrations in different compounds will be close enough to reality. He points out that, in the absence of these defect calculations, defect compensation by antisite defects for similar sites with different charges needs to be critically considered.

Composite materials have been explored for a myriad of applications owing to their superior properties over their individual constituents. These materials can be grouped, based on the available models, as particulate-reinforced, random microstructure, and periodic structures. There is a limitation in the frameworks available for designing materials systems with more predictable and superior properties. Machine learning (ML) is being employed to help predict and design much better composite materials based on available experimental and computational data. However, ML-based design faces challenges in extrapolation into unknown design spaces and limited datasets. To solve the extrapolation problem, Seunghwa Ryu proposed an active learning approach where the ML models were gradually updated with more data until the global optimum mechanical property was found. For this to be effective, results from the ML model need to be validated with experiments and simulations and new data fed into the neural network. Ryu demonstrated how the Bayesian optimization can be used to tackle the problem of limited datasets and low quality data by identifying regions with largest uncertainty and working to decrease the uncertainty. Ryu employed this approach to improve the toughness of a nacre-inspired composite.

Wearable electronics are required to be, amongst other things, highly stretchable, biocompatible, and washable. Considering all these requirements, textiles are the most optimal substrates being used for these electronics. Employing two-dimensional (2D) material inks such as graphene and other layered materials for the electronic circuit design reduces the cost of production. These 2D materials show a lot of promise in tunability and multifunctionality. Using microfluidic exfoliation, graphene platelets can be obtained from graphite and the aspect ratio of these platelets can be tuned to have corresponding changes in electrical conductivity. In addition, bandgaps of the wearable electronics can be tuned by designing layered materials. Felice Torrisi demonstrated an inkjet printing approach for printing graphene oxide on a cotton substrate. The surface of the cotton was modified with cations to develop a positive charge whereas that of the graphene oxide ink was negatively charged. This was found to improve the adhesion of the ink on the cotton substrate considerably, resulting in stable electronic properties over 20 wash cycles. In addition, Torrisi showed how cotton wool could be mixed with graphene ink to produce graphene-cotton fiber via a wet-spinning approach. This significantly improved the flexibility of graphene.

Symposium EN03: Beyond Li-Ion Batteries—Low Cost Alternatives Based on Other Chemistries

In the past few years, sodium-ion batteries (SIBs) have attracted significant attention due to their virtually unlimited resources. The commercial market has a wide variety of sodium-containing resources making electrode preparation scalable. The exploration and development of sodium-based electrodes for SIBs is currently a prevalent research topic. In particular, the Na2FePO4F cathode serves as an attractive candidate for SIBs, owing to its more stable cycling performance and high discharge voltage. Density functional theory (DFT) is a modern quantum mechanical approach that has widely gained acceptance from the materials science community as a useful tool for explaining the chemical potential stability and the intrinsic vacancy defects, for example. The ability to study intrinsic defects at the level of atoms and molecules is essential for the advancement in energy storage. To characterize the electronic structures of this fluoride-phosphate structure and explain electron interactions and charge localization, all calculations are performed using the hybrid HSE06 (Heyd-Scuseria-Ernzerhof) functional. By employing DFT, Daniel Sykes offers new insights in understanding the doping effect for potential improvements in the sodium-ion diffusivity and electronic properties for SIB cathodes.

Tiantian Li leads us through the quest for improved optical phase change materials (O-PCM). These materials serve as an attractive candidate in memory and logic units for optical signal processing and storage. Some applications include nonvolatile optical memory, nonvolatile photonic switch, neuromorphic photonics, reconfigurable photonics devices, and recently optical neurosynaptic networks capable of supervised and unsupervised learning. Li and her colleagues have investigated the two-layered crystalline states of indium (iii) selenide materials for optical memory. Key achievements noted from this work include the demonstration of nonvolatile switching of the hybrid In2Se3-Si resonator driven by a single nanosecond pulse. Li’s materials are a vast improvement compared to amorphous-crystallization transitions. Experimental and computational data were collected by differential scanning calorimetry, x-ray diffraction, and density functional theory. These results elucidate the finding of low entropic structural transitions in the layered In2Se3 structures for producing the energy efficiency and speed constraints of memristive circuits and devices.

Symposium EN03: Beyond Li-Ion Batteries—Low Cost Alternatives Based on Other Chemistries

A primary initiative for current energy storage research is discovering new anode materials for Li-ion batteries. An emerging class of silicon-based cage compounds known as clathrates can serve as promising candidates. An empirical investigation of type II silicon clathrate (e.g., LixSi136) as a potential anode material for electrochemical application is showcased. This hybrid Si-Li clathrate contains lithium atoms situated in the interstitial gaps while silicon atoms collectively form as a host structure. The exploration of the initial stage of diffusion was studied and confirmed using time-of-flight secondary ion mass spectrometry), x-ray diffraction along with Raman spectroscopy that offered useful insights into the Li diffision into the anti-bonding state of Si clathrate causing a reduced structural stability. Interestingly, the behavior of Li in the clathrate cages was studied using electron paramagnetic resonance) showing that unpaired electrons and magnetic nuclei causes hyperfine interactions while Yinan Liu later noted that the Li atoms doubled its occupancy in the Si clathrate cage after diffusion. The findings of this work offer a renewed understanding on occupying clathrate cages, opening the door for the possibility of exploring a variety of different interstitial guest atoms. 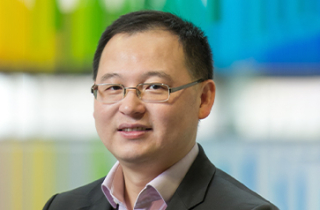 In his Symposium X presentation,  Xinliang Feng of the Technische Universität Dresden spoke about inorganic two-dimensional (2D) crystals such as dichalcogenides, boron nitride, black phosphorus, metal oxides, and nitrides beyond graphene. He noted that there has been much less development in organic 2D crystalline materials, including the bottom-up organic/polymer synthesis of graphene nanoribbons, 2D metalorganic frameworks, and 2D polymers/supramolecular polymers, as well as the supramolecular approach to 2D organic nanostructures.

Recently, Feng’s research group observed fractional edge excitations in nanographene spin chains. This has led to work on G-nanostructures and organic 2D materials such as 2D polymers and conjugated polymers.

One of the central chemical challenges is to realize a controlled polymerization in two distinct dimensions under thermodynamic/kinetic control in solution and at the surface/interface. In this talk, Feng presented his group’s recent efforts in bottom-up synthetic approaches toward novel organic 2D crystals with structural control at the atomic/molecular level. On-water surface synthesis provides a powerful synthetic platform by exploiting surface confinement and enhanced chemical reactivity and selectivity.

Feng presented a surfactant-monolayer-assisted interfacial synthesis (SMAIS) method that is highly efficient to promote programmable assembly of precursor monomers on the water surface and subsequent 2D polymerization in a controlled manner. Two-dimensional conjugated polymers and coordination polymers belong to such materials classes. The unique 2D crystal structures with possible tailoring of conjugated building blocks and conjugation lengths, tunable pore sizes and thicknesses, as well as impressive electronic structures, make them highly promising for a range of applications in electronics, optoelectronics, and spintronics. Other physicochemical phenomena and application potential of organic 2D crystals, such as in membranes, were also discussed.