Disorders, both external and internal, in two-dimensional (2D) transition metal dichalcogenides (TMDs) are critical to the study of the intrinsic behavior of 2D TMDs. Devices made from TMD crystals containing significant disorders with defect density on the order of 1013/cm2, show low quantum yield and carrier mobility. James Hone of Columbia University introduced a new growth technique, flux synthesis, that was shown to produce 2D TMD crystals with 2-3 orders of magnitude lower defect density. Materials obtained by this method exhibited increased photoluminescence. Most importantly, the Hone group was able to observe bright trionic (trion: a localized quasi-particle consisting of three charged particles, which have a lifetime on the order of 10s of picoseconds) emission, with average trion-lifetime of 250 ps, demonstrating the first known measurement of intrinsic trion lifetime. The last part of his talk was focused on Moiré superlattices created by stacking and twisting 2D tungsten diselenide (WSe2) layered structures, implicating superconductive states, which was observed in twisted bilayer graphene structures by the Jarillo-Herrero Group at MIT.

“Whiskey is for drinking; water is for fighting!” Gideon Segev from Tel Aviv University showed this Mark Twain’s quote in his presentation to highlight the challenge of fresh water scarcity. As a researcher from Israel, where fresh water is limited, Segev has a deep motivation to make drinkable water easily accessible. He said that reverse osmosis, a widely used technique for seawater desalting, was economically unaffordable for under-developed regions.

To circumvent the problems of reverse osmosis, Segev and co-workers developed portable, “all-electric” ion pumps that could desalinate water in a regular glass cup. The core component of the ion pump was an electronic ratchet, which utilized a spatially varying electric field to pump ions out from saltwater. This mechanism allowed ion transport without any electrochemical reaction, which significantly boosted the stability of the pump. Segev and co-workers were still exploring optimal operating parameters to maximize the performance of the ion pump.

This section of the symposium was focused on the large-scale, industrial applications of two-dimensional (2D) materials-based electronic devices. Iuliana Radu from IMEC identified a number of challenges in the scalability of 2D materials-based transistor devices, and compared the performance of existing 2D field-effect transistors (FETs) to that of the Si-based devices. In an attempt to answer the question, “Can 2D materials replace Si?”, Radu highlighted the course of action in order to overcome the inferior performances of 2D materials-based electronic devices compared to the Si-analogues. In this context, Radu demonstrated a state-of-the-art approach—“2D transfer with a laser release layer” to efficiently transfer wafer-scale 2D materials atop target device substrates without the use of a polymer. Additionally, she pointed out that dielectric gating and channel defectivity of these devices needed careful manipulation to produce high on/off, high mobility FET devices for industrial usage.

Bullet-proof vests sometimes could fail to function as a life-saver. Kelvin Xie from Texas A&M University discussed in the Friday afternoon session of MS01 the failure mechanisms of boron carbide (B4C), a component blended with Kevlar to make bullet-proof vests. Xie and his team investigated the failure mechanism of boron carbide and elucidated the mechanism of why silicon doping could drastically strengthen B4C.

Xie and co-workers observed that undoped boron carbide, upon impact by a projectile flying with a speed more than 900 m/s, cracked. The researchers found that the crystalline B4C lattices along the cracks were amorphous. In contrast, the projectile-impact, silicon-doped B4C contained only microcracks without amorphization. Xie and co-workers believed that silicon-doping prevented B4C from becoming amorphous before rupturing, a characteristic that localized cracks and enhanced B4C strength.

How much catalyst do you think is loaded in commercial electrolyzers for water-splitting? Feng-Yuan Zhang of the University of Tennessee opened his presentation in the Friday morning session of EN07 with this question. His research group devotes to cutting the catalyst mass loading in electrolyzers via engineering routes.

Zhang and co-workers used an optical setup that could visualize gas-bubble formation on the surface of catalysts inside an electrolyzer in real-time. His team observed that oxygen and hydrogen gas bubbles only produced on the surface of the catalysts in contact with a metal-based, porous liquid/gas diffusion layer. No gases produced on the surfaces of catalysts located far away from the diffusion layer. The researchers ascribed this discrepancy to the electron transport at the diffusion/catalyst interfaces. Catalysts contacting the highly conductive diffusion layer could transport electrons in and out to maintain function. Inspired by this discovered principle, Zhang and co-workers managed to build an electrolyzer with ~10 times fewer catalysts and ~50 times higher activity compared to conventional devices.

MRS Meeting Scene bloggers provide a unique look at the MRS Meeting, from the science sessions, to special activities and poster sessions, to fun places to visit outside the convention center. They get to interview researchers along the way, and they get to recommend city tours. For an inside look of what MRS Meetings have to offer, read through the bloggers’ section. To provide that inside look, consider being a blogger for the MRS Spring or Fall Meeting:

Graduate students and post-docs who are interested in contributing to the Meeting Scene® Blog are encouraged to apply. Bloggers will be required to post at least five items per day and also tweet about their experiences at the meeting. For completing these daily assignments, bloggers will receive reimbursement up to the student registration rate and a $50 stipend. To apply, please send an email to newseditor@mrs.org stating your qualifications and your reasons for wanting to blog for us. We need only four bloggers per Meeting, so we will not be able to accept everyone who applies. We look forward to hearing from you!

Hopefully, you guys are having a nice time travelling around Boston.

If you have some time left after the poster sessions, do try paying Boston Commons a visit. It is the oldest park in the United States, founded in 1604, and is just outside the Boylston Station, 3 stations away from Hynes Convention Center. The place is specially lit for the last 2 days on the occasion of the festive season and you can often find a lot of birds and squirrels munching things around. The places nearby are also pretty great, including Chinatown where you should definitely try some South-East Asian cuisine. If you have been there, do let me know in comments about your experience.

P.S: You can see the Prudential Tower in the background in the second picture. 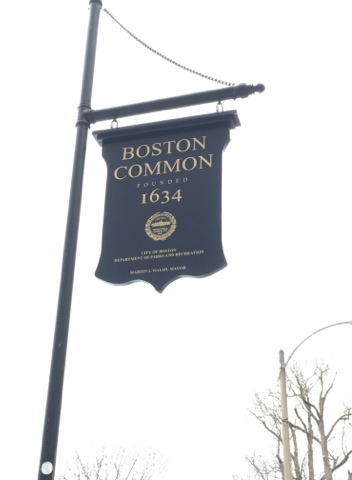 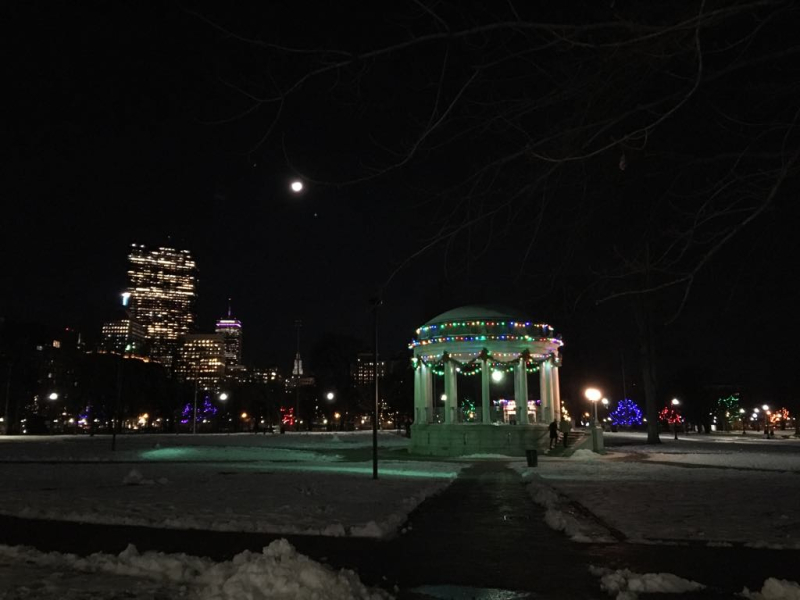 Thursday's poster session saw a huge participation, a specific section where students currently in their high school showed their research work. It's heartening to see the material science enthusiasts starting so early. Interviewing a couple of them, I found out that the projects were mostly their summertime projects which were aimed for them to get a hang of the subject.

Mr Sovesh Mohapatra hails from Jaipur, and has been doing research in various fields for the last few years. He collaborated with Dr Satapathi's Lab from the Department of Physics IIT Roorkee where his research aims in growing lead-free single crystal using inverse temperature crystallization method.

Ethan and Jack from South Side High School and Hewlett High School researched on mixed cation perovskites which included preliminary characterization of perovskites thin films composed from them, as well as stability studies to determine their applicability as thin films for optoelectronic applications.

We sincerely hope that MRS keeps giving these young chaps a chance to showcase their research and encourage them from such a young age. 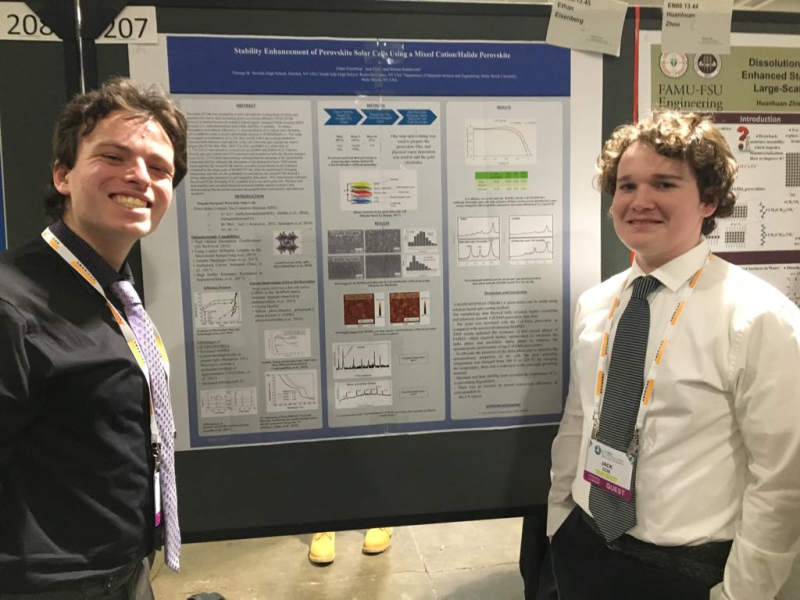 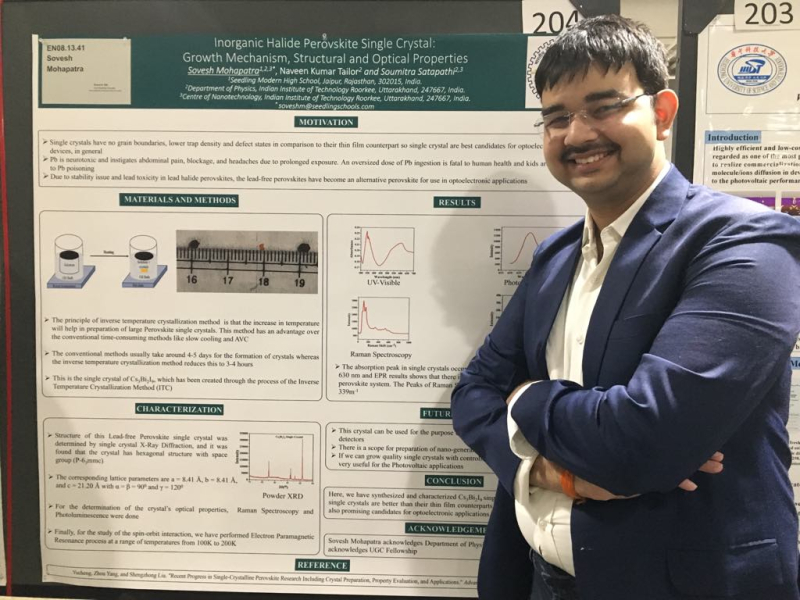