The Materials Research Society held its Fall Meeting on November 26 to December 1 in Boston, Massachusetts. See the highlights reported on social media by participants, presenters, and others as well as reports from additional MRS news sources. 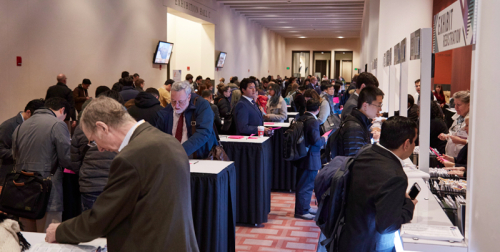 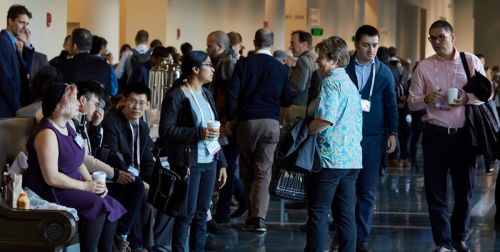 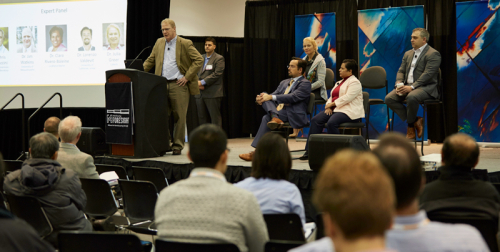 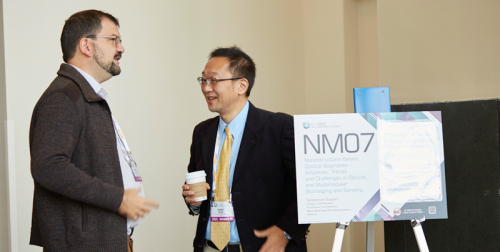 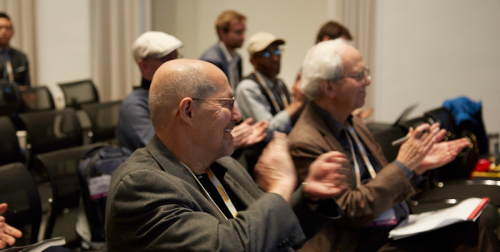 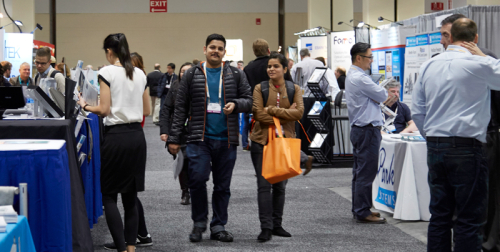 The 2017 MRS Fall Meeting & Exhibit came to a successful conclusion on Friday, December 1, with over 6,500 attendees and 241 exhibitors. Our congratulations go to the Meeting Chairs Ilke Arslan, Jason A. Burdick, Tao Deng, James B. Hannon, and Sanjay Mathur, for putting together an excellent technical program along with various special events. MRS would also like to thank all the Symposium Organizers, Session Chairs, and Symposium Assistants for their part in the success of this meeting.

Thank you for subscribing to the Meeting Scene e-mails from the 2017 MRS Fall Meeting & Exhibit. We hope you enjoyed reading them. We welcome your comments and feedback.

Kirigami is a Japanese art form where paper sheets are cut to enable folding resulting in the rise of highly sophisticated three-dimensional structures.

In addition to the transition from two-dimensional to three-dimensional, plastic kirigami with geometrical arrays display interesting mechanical properties that depend on shape of the unit elements: squares, triangles, or trapezes, and on the width and thickness of the ligaments bridging these elements. Typically, the flat kirigami initially deforms in its plane as the ligaments deform. Then, above a predictable critical strain, it enters a buckling unstable mode where the stress plateaus as the single elements pop-up in or out. Stretching further, plastic deformation of the hinges creates a permanent folding rigidifying the structure.

When wrapped around an inflated elongated balloon, kirigami with triangular, circular of trapezoidal-shaped elements pop-up all in the same direction, resulting with an increased friction coefficient in one direction. Kirigami with squares also exhibit pop ups but with isotropic friction coefficient. Katia Bertoldi and her research team thus exploited the anisotropy to induce snakelike motion on the balloon when it is repeatedly inflated and deflated. With control and actuation directly on board, the structure can move by itself. Her team is now investigating how to improve the skin to control the direction and motion of these biomimetic snakes.

Atomic-layer deposition is a potential technique for scalable synthesis of layered materials such as molybdenum disulfide (MoS2). However, this technique exhibits many challenges, and is largely limited to the synthesis of polycrystalline films. To understand such films resulting from atomic-layer deposition, crystal orientation must be studied. One technique through which grain orientation may be assessed is polarized Raman spectroscopy. Researchers as Eindhoven University of Technology have shown through simulation and experiment that the combination of parallel and cross polarized Raman spectroscopy can allow for the determination of crystal orientation in polycrystalline MoS2 films through assessment of the ratio between A1g(A′1) and E2g(E′) modes. Additionally, work at Eindhoven University of Technology shows that second-harmonic generation measurements can provide information regarding fixed charge density of MoS2 films on c-Si/SiO2 substrates, where previous research in the field has also demonstrated this technique for charge density determination in Al2O3.

Elucidation of Friction Behavior in 2D MoS2 with Raman Spectroscopy

As layered materials such as molybdenum disulfide (MoS2) see continued development for nanoscale electronics, detailed investigation of friction in few-layer systems and its role in device technologies is needed. To investigate friction few-layer MoS2 systems, researchers at Rutgers University have employed Raman spectroscopy and atomic force microscopy. Through joint-use of these techniques, it is found that friction can vary widely within individual layered crystals of MoS2. Additionally, Raman spectroscopy of few-layer MoS2 synthesized through vaporization of molybdenum trioxide and sulfur powders shows that friction on the surface of this two-dimensional material is dominated by phonon behavior. As a result of these studies, an algorithm has been developed that can predict the friction in layered MoS2 simply based on experimentally obtained Raman spectra.

Zeolites are porous materials composed of oxygen and silicon or aluminum, which can be used to filter or separate chemicals and select for individual molecules. However, realization of zeolite materials for further materials studies and development have relied on exfoliation of bulk crystals which can lead to coupling of the zeolite nanosheets and can harm the performance of these materials for separation uses. Researchers at the University of Minnesota are working to develop methods of synthesizing MFI-type zeolite nanosheets on larger areas, and with larger yield. The approach involves the synthesis of a seed crystal realized through a solution-based method. The seed crystal is shown to generate 5-nm-thick nanosheets after growing to roughly 100 nm in length, and resulting nanosheets are shown to have lateral dimensions on the micron scale.

Electrolytic double layer transistors are devices in which the conventional gate insulator material is replaced with an ionic liquid. The use of this ionic liquid can allow for accumulation of one to two orders of magnitude greater carrier density than what is seen in conventional gate insulator structures. As a result, this technique can allow for increased channel current and can be used to modify electronic states of the channel material. Yoshihiro Iwasa of the University of Tokyo has used electrolytic gating to explore a range of two-dimensional and layered materials, as well as their application in thermoelectric technologies. Specifically, Iwasa has shown that gate-induced superconductivity may be achieved in molybdenum disulfide using electrolytic gating. Additionally, Iwasa’s work demonstrates that layered materials such as FeSe exhibit an increase in Seebeck coefficient and power factor with decreasing layer number or thickness.

Viruses are a class of lethal communicable diseases that can have profound impact on the global population. For example, the impact of the first and second world wars is dwarfed by that of the Spanish flu. Treatment of viruses can be divided into prevention and post infection treatment. These treatments can be further divided into three categories:

Antivirals: Approved medication that prevents intracellular viral replication. They work by targeting cell components. Because cellular components do not amplify, the treatment intensity is known.

Viralstatic: Prevent viral entry to the cell. However, because binding is reversible, dilution would result in reactivation of viral particles. There has been failed clinical trials in this area.

One such example of viralstatic agents is heparin sulfate proteoglycans. Their ability to bind is very conserved between viral types. The Stellacci group first attached sulfate groups to nanoparticles and found that these particles behave viral statically. The binding regions of the virus usually have multiple sites for interaction (5 in the case of papilloma). It is hypothesized that binding multiple regions can create a 100 pN force that can trigger premature viral unpacking, and thus particle destruction. Testing with GFP HIV particles show concentration-dependent decrease of infectability.

Testing wildtype viruses—HSV1, HSV2, HPV—shows the same result, with only sulfate group linker length serving as an important modulatory factor. Through dilution testing, it was shown that the virucidal effect is not dilution-dependent and not reversible. In a culture system, this treatment is shown to be effective for HSV2-infected vaginal tissue. The proposed mechanism from imaging is mechanical bulging of the viral coat causing it to expel the capsid.

Lastly, nanoparticles are not necessary. Cyclodextran with sulfate groups attached with the correct linker length has proven to be equally effective. Animal experiments show mice were cured of respiratory viral infections by spraying 10 ug of drug once in the nose. Scaled up, this would mean 2.5 mg for a 60 kg human.

Sensing and actuation are at the heart of every modern-day device. In fact, a suitable combination of these two ascribes “smartness” to otherwise conventional systems. Given the diversity in length scales, even for the same measurand, scaling-up of transducers is an ever-present challenge. For example, microelectromechanical systems (MEMS) provide very fine spatial resolution and localized measurement of displacement. But many applications require sensing over much larger dimensions like aircraft wings. Scaling-out is not a viable option given that it generates an enormously large data stream. An associated problem for such large length-scale sensing is a reasonable amount of flexibility in the transducer.

Hortense Le Ferrand and her co-workers have been exploring an unusual bi-inspired approach to addressing this challenge. Their smart material is a bistable shape-changing composite with a fast response (~200 ms). The material is sensitive to both mechanical and magnetic signals, given its composite nature (made up of the multilevel hierarchical structure of ceramic microplatelets, nickel flakes, and epoxy). Appropriate sequencing of the fabrication pre-stresses the composite, leading to curvature and associated bistability. Stable states correlate to specific electrical conductivity, thus providing appropriate sensing principle. They have successfully fabricated these composites for sensing areas of the order of 100 cm2. Future investigations relate to characterizing thermal and environmental stability as well as tuning of transduction function in terms of materials selection and composite structure.