Design and Applications of Citrate-Based Biodegradable Photoluminescent Polymers and Dyes

Biodegradable polymers are of paramount importance in medical applications because they can be transformed into simpler molecules and be subsequently eliminated from the organism. On the other hand, multiple disease diagnosis rely on markers such as dye molecules, quantum dots, and functionalized inorganic nanoparticles that help identify and treat the effected areas. Most of the time these derive in toxic compounds or accumulate, which is not convenient. Jian Yang’s research group at The Pennsylvania State University has shown how fluorescent biodegradable polymers can be obtained from citric-acid-based fluorophores that combine functionality and means for elimination. Moreover, aside from the conventional use of markers, a revolutionary concept for disease treatment is envisioned as allowed from this materials development: conjugation of leucocyte cells and fluorescent biodegradable drug-polymeric nanoparticles as a tool for targeted cell treatment. “Using live cells to carry on drug-nanoparticles, we can drop to the tumor sites, to the inflammation sites, we call this ‘immune-cell mediated drug delivery,’” Yang explained. Certainly, this is an important step in many disease therapy where only the corrupted cells would be treated.

Graphene on Silicon: Applications and Perspectives

Even though the extraordinary properties of graphene have motivated extensive research, many challenges remain, especially in producing large-area substrates and in transferring the graphene to a different substrate from which it was first synthesized. Francesca Iacopy, from Griffith University, showed recent developments in graphene fabrication. Using Cu/Ni alloys, bilayer graphene on various substrates can be realized at temperatures comparable to conventional semiconductor processing. This metal alloy approach can be tuned to produce rough surfaces that lead to high specific-area graphene structures, which are of special importance in applications such as energy storage. Refinement of the processing is still to be done; however, this versatile method shows promising pathways toward graphene implementation in daily life devices. 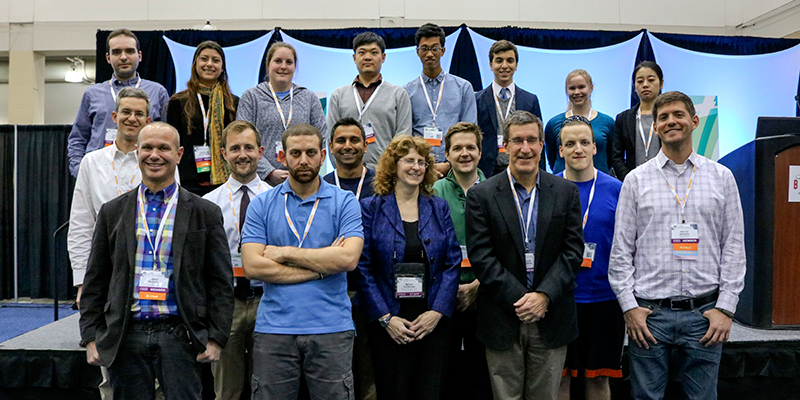 Symposium B: Stretchable and Active Polymers and Composites for Energy and Medicine

The next generation of bio-integrated healthcare devices was showcased in Dae-Hyeong Kim’s talk about flexible electronics. To decrease discomfort from rigid components and inefficiency due to poor contact, Kim closed the gap between the mechanical strength of rigid electronics to human tissue. In regards to colon cancer, reoccurrence rates are high, so for better drug delivery, a multifunctional smart surgical endoscope with a transparent camera was developed. Radial ablation or the heating of a tumor is assisted with a pH probe to find cells and a viability sensor to detect success. Smart patches were developed for Parkinson disease where an abnormal dopamine level causes stable frequent tremors. A heater controls drug desorption from loaded porous nanoparticles. With elasticity similar to the skin, the patch remains in good contact and tremor frequency is measured with a strain gauge. If frequency is too high, more drug is delivered and if too slow, less to prevent side effects. Novel Intaglio printing was used for electrical components with extremely high resolution and data is stored in resistive random-access memory (RRAM). This allows for specialized real-time dosages.

Spider silk is a shape memory fiber found in nature that super contracts in the presence of water. Other stimuli include electrical, magnetic, light, and oxidation. Human-made fibers have also been produced that are tuned by manipulating the switches and net points through polymer chemistry, mimicking the structure of spider silk. The fibers can be used to make high pressure, comfort, and fashion garments. High pressure garments made of memory fibers are beneficial since one fabric can contract to the shape of the leg precisely, for example. They can apply a pressure gradient of tunable selectivity, massage the tissue, and easily be taken on and off. The cost can be low since knitting the shapes is easy. These fibers can be used to treat chronic venous disorders of tissue swelling and be worn by ICU patients and air travelers since a single product fits many sizes.

Direct imaging of nanoparticles in biological systems can improve the efficiency of treatment by showing where the nanoparticles are going and how they are getting there, which would give insight on release, uptake, and cytotoxicity. Starting with gold nanoparticles, energy-dispersive x-ray spectroscopy (EDS) was used to visualize the nanoparticles in liver tissue by measuring chemical composition in addition to morphology. With silica nanoparticles degradation, change is seen over time. Organic nanoparticles present challenges to distinguish the nanoparticles from vesicles or organelles due to similar size, organic composition, and low mass contrast. Therefore the nanoparticles are labeled with metals. With these samples, it is important to take into account the sample preparation. Here paraformaldehyde and gluteraldehyde to fix the sample to withstand vacuum as well as staining and immunolabeling agents such as uranyl acetate, osmium tetroxide, and LR white were used. With these added agents, Paul Kempen looked at their interference with species of interest to tune the correct system. To apply these findings, an effective rat blood brain barrier was created with tight junctions to better understand transport into the brain.

Application of AFM to the Nanomechanics of Cancer

Cancer is not one disease but a collection of several diseases. The usual procedure for the detection and diagnosis of cancer begins with the patient being identified with a tumor/mass, which is then biopsied to determine its histology and cytology to establish a diagnosis. Shivani Sharma outlined in detail the progress that had been made in using the atomic force microscope (AFM) in cancer diagnosis. Different types of cancer and different stages of cancer have different biomolecular characteristics such as actin cytoskeletons, which substantially changes the stiffness of a cancer cell and its ability to metastasize. Most studies on cancer biomechanics have been done on single cells or biopsied tissues. By using a specially designed needle that has a piezosensor attached to it, this stiffness can be evaluated in real time, in situ, during needle aspiration by a radiologist. Such determination is bound to have important implications for the diagnosis of many types of cancer. An emerging class of biomarkers, called exosomes, which are nanoparticles secreted by cancer cells in easily assessable body fluids such as blood and saliva, were also discussed, where AFM is making important contributions as a powerful characterization tool.

The discovery of new materials has been a result of hard work and serendipity. The need for new alloys and functional materials emphasize accelerated exploration of the material data space to look for interesting candidates. Bhaskar S. Majumdar outlined three strategies for High Throughput Experimentation. The first is to eliminate as many combinations as possible in the shortest period of time. This involves using theoretical models of these materials, with rapidity preferred over accuracy. The second strategy is to implement multiple levels of screening using relevant performance characteristics to further narrow the combination space. The first strategy is composition-focused while the second is microstructure-oriented. These strategies bring down the number of testable materials from the millions to the thousands. Majumdar underscored many relevant testing approaches, such as principal component analysis, CALPHAD, for example, emphasizing that different approaches are required for functional versus structural materials.

The bandgap tunability of the two-dimensional metal dichalcogenides makes them interesting platforms for solar energy conversion. However, the same qualities (i.e., low-dimensions) that lend to the bandgap tunability are also a drawback. The thin nanomaterials have a low absorption cross-section, making it difficult to implement them into solar cell technology. Mircea Cotlet (Brookhaven National Laboratory) investigated this problem and proposed a new solar cell architecture that combines SnS2 with CdSe/ZnS quantum dots (QDs). He found that doping 2D materials with bandgap-matched semiconductor QDs increased the absorption and improved device performance. He observed photoluminescence quenching of the QDs when in contact with SnS2 and used this as the basis for his mechanism study. Cotlet presented experimental results of PL blinking of the QDs and proposed that monitoring PL blinking is a straightforward method to discriminate between energy transfer (FRET) and charge transfer (CT) in 2D hybrids of QDs and 2D materials.

Symposium EE: Beyond Graphene—2D Materials and Their Applications

Phosphorene and Silicene: Complexity and Opportunity in Buckled Atomic Sheets

Phosphorus, otherwise known as the “devil’s element,” was a “hot” topic during Thursday’s afternoon session of Symposium EE. Since its first discovery, phosphorus has revolutionized society through its use in explosives/fireworks (white allotrope) and its use in the striking strip of matches (red phosphorus). Another allotrope, black phosphorus, hopes to bring new discoveries in nanoelectronics with its tunable bandgap from 0.3 eV to 2 eV. Deji Akinwande spoke on his work on phosphorene, a single monolayer of the layered black phosphorus structure, as well as silicene, a new two-dimensional (2D) material comprised solely of silicon atoms. He hopes to use these materials in such applications as wearable technology and flexible electronics. With mobilities approaching 1,000 cm2/Vs and on/off ratios of 104 and 105, Akinwande argues that phosphorene just may be the best “classical” 2D material. He even played music through a phosphorene single transistor demodulator to demonstrate its utility. Despite this promise, he warns of the air instability of the material as it is known to degrade upon air exposure. However, he countered with the fact that his group (and several others) have demonstrated several methods to passivate the material and allow phosphorene to be used to its full potential. The second half of Akinwande’s talk focused on silicene, a novel 2D material. Although Akinwande briefly discussed silicene’s potential, the main focus was that silicene’s transport property is protected by its natural symmetry (topological insulator), giving it a unique advantage over other 2D materials. We can expect to hear more about these two materials as the technology continues to advance.