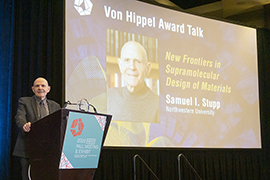 In honor of receiving the Von Hippel Award, Samuel Stupp of Northwestern University delivered a talk on Wednesday titled “New Frontiers in Supramolecular Design of Materials.”

Stupp is a pioneer in the field of self-assembling, or supramolecular, materials. Researchers create these materials by exploiting noncovalent bonds, such as hydrogen bonds or electrostatic bonds, between molecules to form predesigned structures. Over several decades, Stupp’s exploration of the fundamental science of these materials has now led to budding applications in renewable energy, robotics, and medicine.

Stupp recounted some of the early days in his lecture. In one early experiment, published in 1997, his team showed that they could build a single molecule which then self-assembled into a mushroom-shaped nanostructure. “This was really an important breakthrough for our lab because we showed how you could program a material using a single molecule and let everything else across the scales happen spontaneously,” he said.

As they have learned to test and design these materials, Stupp’s group has also demonstrated promising applications of self-assembling materials. He highlighted a light-harvesting system inspired by chloroplasts, found in the leaves of plants, which absorbs sunlight to produce energy for the plant. Their created material is a hydrogel that self-assembles into a ribbon-like structure. They have demonstrated that these materials can harvest sunlight to produce hydrogen fuel. “Making solar fuels doesn’t have to be always about a large chemical plant,” Stupp said.

The vision is to create an object as versatile as a tree that can convert sunlight and molecules into fuel or some other desired product. “A tree can be anywhere,” Stupp said. “[…] We could coat its surfaces, and we could shape them in any way we want.” 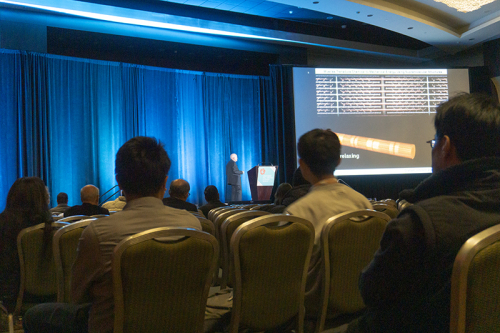 He also presented research on supramolecular materials in soft matter experiments. This work centered on developing materials that can swim, bend, and crawl in response to low-energy stimuli, such as light or magnetic fields. In one early case, his group developed a polymer that becomes hydrophobic in response to light. Then, the material shrinks by expelling water, which the researchers can design into a structure that moves. This prototype material could bend on the order of minutes and crawl over hours.

Building on that work, the research team also made a faster system that responds to magnetic fields. The material is made of ferromagnetic nanowires. It walks in water at about 1 step per second. The researchers created a system that responds to light to pick up cargo, rolls in response to a magnetic field, and then releases the cargo in response to another light signal. The researchers are able to make it bend in seconds rather than minutes

In 2021, Stupp’s group injected paralyzed mice with a supramolecular material and showed that they recovered the ability to walk in four weeks. The research team designed the materials to trigger activity in cells in injured spinal cords. The materials biodegrade within 12 weeks of injection.

The research group could control the speed of the motion of the injected molecules and found that faster moving molecules resulted in more significant recovery.  “It’s fascinating to think about what we could do with materials with such subtle changes, dictated by the chemical structure,” Stupp said.

Stupp ended the lecture with his thoughts on the future of the field. Machine learning and atomistic simulations will help accelerate the discovery of new self-assembling materials, he said. Another future direction is to combine different types of supramolecular materials. He described these molecule combinations in analogy with alloys in metallurgy. The field will also continue to draw on biology-inspired structures and should explore combinations of synthetic and natural molecules.

Stupp received the award “for pioneering contributions to the development and understanding of a broad range of molecularly designed supramolecular soft materials that function as bioactive scaffolds in regenerative medicine, matrices for photocatalytic activity, and stimuli-responsive robotic structures.”

The Von Hippel Award, the Materials Research Society’s highest honor, recognizes those qualities most prized by materials scientists and engineers—brilliance and originality of intellect, combined with vision that transcends the boundaries of conventional scientific disciplines.