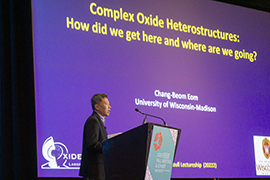 Complex Oxide Heterostructures: How did we get here and where are we going?

In his David Turnbull Lecture, Chang-Beom Eom of the University of Wisconsin–Madison spoke not only about his own group’s work with thin-film epitaxy of oxide materials, but about the field at large. He discussed several recent breakthroughs in complex oxide thin films, how the field had progressed in the past decades. Eom concluded by listing a pair of the latest obstacles facing better thin films and how his group had begun surmounting them.

Engineers and materials scientists have taken an interest in complex oxides due to their wide range of properties, everything from piezoelectricity to ferromagnetism to superconductivity, that are particularly useful for applications in electronics. Complex oxides come in varying forms, including ceramics and single crystals, and there are multiple ways to prepare them. 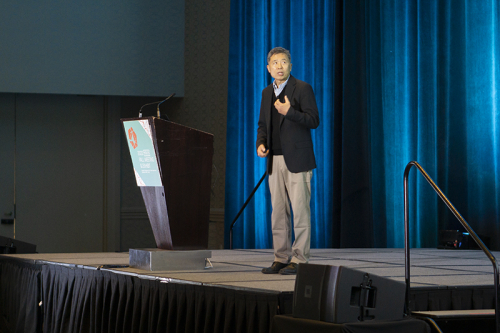 But it wasn’t until very recently that researchers knew how to grow complex oxides in thin-film form. Eom first encountered the idea as a graduate student working on high-temperature superconductors in the late 1980s, when a colleague hacked together a method of growing a superconductor on a substrate of strontium-based artificial gemstone. This relatively primitive ex situ method, Eom said, had a number of severe limitations. It produced roughly textured layers that smeared into each other, which made crafting multilayer structures prohibitively difficult. 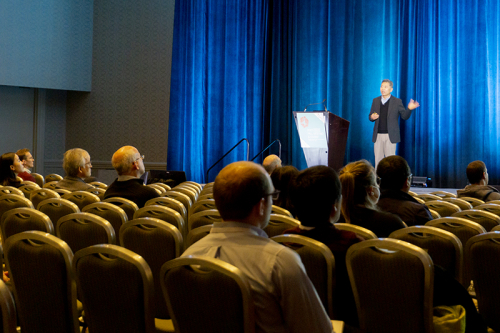 To get around this, Eom and other researchers in the 1990s developed a new in situ method. That came with its own challenges; the layers were challenging to control, and they required high oxygen pressure for stability—something incompatible with traditional vacuum systems. To overcome these challenges, researchers developed a new pumping system with multiple pressure levels.

Epitaxial complex oxide films have advanced in leaps and bounds since the 1990s, but researchers working with them still face formidable challenges. One how to find, control, and zap out defects, a goal that’s especially pressing to anybody working with semiconductors or electronics. The key, Eom said, is to achieve greater control over the thin films. To that end, Eom’s group has tinkered with a new chemical pulsed laser deposition approach.

Another challenge is that, while epitaxy is good at making multiple layers with similar layers, it struggles to deposit multiple, starkly distinct properties. Doing this could create better and more optimal methods, but it will require currently experimental methods. Eom discussed several methods his group was trying out, including growing films on graphene or growing them on a “sacrificial layer” that could be peeled away.

Such methods can create a previously unexplored type of thin film: a bilayer heterostructure whose layers are slightly twisted with respect to each other.

Chang-Beom Eom received the David Turnbull Lectureship for his “pioneering research and insightful lectures on epitaxy of oxide materials and its impact on applications in electronics.”

The David Turnbull Lectureship recognizes the career contribution of a scientist to fundamental understanding of the science of materials through experimental and/or theoretical research. In the spirit of the life work of David Turnbull, writing and lecturing also can be factors in the selection process.