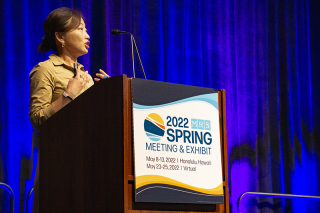 Shirley Meng, The University of Chicago

From Atom to System—Tera-Scale Energy Transition with Better Batteries

In the final Symposium X talk of the in-person meeting, Shirley Meng, from The University of Chicago, took the audience through a brief history of lithium-ion batteries and shared several stories from her own research career. Throughout her talk, Meng touched on themes of team science and the power of materials scientists to help solve global problems.

At the heart of Meng’s talk was a vision of a future where batteries are not disposable but instead are assets to be recycled and reused. She envisioned each home having a battery supplying “green electrons” from renewable sources, akin to a major appliance like a refrigerator. Batteries of the future must last for decades, she said, and be completely recyclable. We must be responsible for how batteries are produced and how they will continue on planet Earth.

Meng provided a brief history of batteries that stretched back 270 years to when Benjamin Franklin first coined the term “battery,” and included the appearance of the first commercially available lithium-ion batteries in 1992. Lithium-ion batteries have come a long way in the past 30 years, tripling in energy density and gaining a ten-fold increase in lifecycle while also becoming ten times cheaper. Meng underscored the role of materials science enabling every necessary breakthrough along the way, as researchers developed new cathode, anode, and electrolyte materials.

Meng described the lithium ion/metal battery as a complex “living” system and demonstrated the massive volume changes they undergo as they cycle. She emphasized the need for engineering solutions for batteries that are robust to dramatic volume changes, can go through thousands of cycles, and operate reliably in extreme conditions, for applications like aviation. 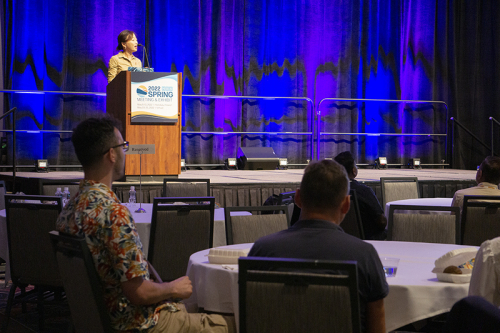 Meng discussed the value of using atomic-scale information to design better batteries. Among the stories she shared from her own research was work done as a graduate student exploring lithium-rich layered oxides using density functional theory. In the simulations, she found that putting lithium in the transition metal layer pushed oxygen p-levels closer to the Fermi level, allowing the oxygen anion to participate in conduction.

Since that early work, Meng has gone on to tackle countless other questions in the field, a few of which she highlighted today, such as her recent work using cryo-electron microscopy to determine the atomic-level nanostructure of inactive lithium in lithium metal batteries. Intimate knowledge of the lithium metal anode morphology is needed to make these devices maximally efficient and effective, and Meng showed how each study she discussed nudged the field forward, building insight and overcoming obstacles.

As she looked forward to the next decade of energy storage and battery technology, Meng talked about the importance of safety. Even today’s low rates of lithium-ion batteries catching fire would be unacceptable for an in-home appliance-style battery. Solid-state batteries are promising in that regard, and Meng even talked about letting visitors to her lab cut up a solid-state battery with a pair of scissors as a demonstration of their stability (a demonstration not to be repeated at home).

Despite the many exciting research stories Meng shared, she closed by saying that her proudest achievement is the more than fifty students she has mentored. They are the real product of her work, she said. To move the field of battery technology forward, every researcher has a role to play, coming up with creative ideas as well as cranking through the “boring” or less glamorous work that needs to be done. For her, she’s particularly interested right now in partnering with industry, moving ideas from the lab to the marketplace and helping build a healthy ecosystem for battery development.