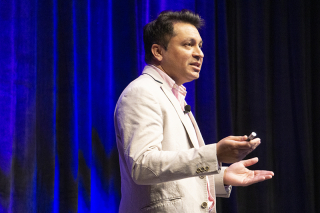 The Rise of 2D Halide Perovskites

When you think of the materials that make solar cells, chances are that you’re thinking of silicon. But silicon has challengers: a class of materials known as halide perovskites, which have achieved gains in efficiency in the last decade that took silicon some thirty years. Still, they have some way to go before they can match silicon's impressive durability.

At Wednesday’s Symposium X, titled “The Rise of 2D Halide Perovskites,” Aditya Mohite of Rice University spoke about his group’s recent work with one avenue of trying to boost that hardiness. His approach: making perovskites that are, as the title suggests, flattened in a two-dimensional plane.

It's a subject with which Mohite is intimately familiar. In 2016, while he was at Los Alamos National Laboratory, Mohite and his colleagues showed that 2D perovskites endured better than their 3D counterparts, even under trying conditions of relatively high humidity and constant light exposure. Mohite says it was a landmark achievement that let flat perovskites shine in a then-3D-dominated field. But to build them into practical solar cells, researchers needed to zoom in on several challenges. 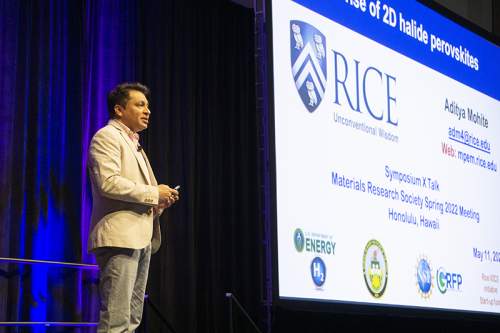 One issue arises from the beginning. Making 2D halide perovskites might mean dissolving a crystalline powder in a solution, then depositing it on a surface, letting it form a film. Impurities often seep in during that process. As a result, even if you have a powder with properties you desire, they might vary in the final film, and the same impurities can drag down the solar cell’s efficiency.

So, Mohite and his colleagues developed a new, phase-selective method of depositing perovskites. They found that this new method reduced many of the impurities, and drastically improved both the durability and efficiency of the material.

After you make the 2D material, its properties might change under light — a rather crucial consideration for a material that’s meant to be out in the Sun for the entirety of its lifetime. Mohite and his colleagues studied these effects by taking their perovskites to a synchrotron beamline. Most notably, they found that the material seemed to contract in the light. If they put the material back in the dark, the effect reversed. It turned out that the culprits were iodine atoms, situated in the perovskites’ structure such that they faced each other. If those atoms were placed closer, the material experienced more contraction. In fact, Mohite and his colleagues found an unexpected boon: contraction made it easier for electrical charge to traverse the material, boosting its conductivity and, again, its efficiency.

Two-dimensional perovskites don’t need to be separate from their 3D counterparts; indeed, they seem to work best together. Mohite’s group has explored taking, for instance, a sheet of glass, stacking a layer of 3D perovskite atop it, then topping it all with a 2D film.

Through exploring such stacks, Mohite’s group has found the best stability yet. One such system could continue operating for hundreds and thousands of hours, even in the raw heat and humidity of Rice University’s Houston climate. If progress like this can continue, Mohite said, then halide perovskites — which can already compete with silicon’s efficiency — may soon approach its durability, too.