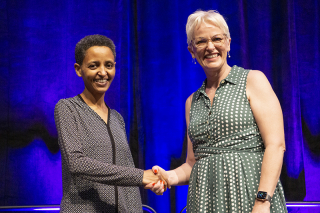 Warming and precipitation changes will hit equatorial regions the hardest, said Sossina Haile of Northwestern University, and developed countries have the responsibility and resources to explore technologies to deal with the changes they are largely responsible for. Her group looks for overlaps between energy technologies, fundamental materials properties, and fabrication of precise structures to get meaningful measurements. Haile presented four examples of solid-state phenomena at successively higher temperatures, which draw on understanding of materials chemistry, thermochemistry, and electrochemistry.

Her first vignette concerned the use of superprotonic conductors at “warm” temperatures. Specifically, the electrical conductivity of cesium dihydrogen phosphate jumps up by three or four orders of magnitude when heated above about 250°C, reflecting rapid reorientation of proton-bearing phosphate groups and the transfer of the proton between neighboring phosphates. One challenge with these materials is that they are water soluble, so they need to be stabilized using a high-humidity environment.

Haile’s research team exploited the proton conduction of this solid acid as the central layer of fuel cells that generate electricity directly from the reaction of hydrogen with oxygen. In this device every electron brings a hydrogen atom, she said, meaning a 100% faradaic efficiency. Adding a reforming catalyst at the anode side creates a cell that uses alcohols as the starting source for hydrogen. There may even be ways to use liquid ammonia as a hydrogen source. “Superprotonic conductors are pure proton conductors,” she said, and “have lots of intriguing technological possibilities.” 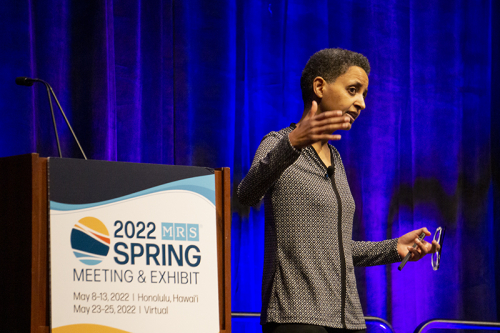 Haile’s second, “hot” vignette involved protonic ceramic electrolytes, such as doped barium zirconate, a perovskite. She described a reversible cell, which can act either as a fuel cell or for electrolysis, similar to a storage battery. The conductivity of this material is good at temperatures around 500°C.

The proton conducting material avoids many of the downsides seen in oxygen-conducting systems, she said, including degradation of materials and dilution of the fuel source. However, current materials are hampered by some electronic conduction.

In her third example, Haile described studies of ceria-zirconia materials, which are commonly used in catalysis at “hotter” temperatures. Although the oxidation state of zirconium is largely fixed, that of cerium can be 3+ or 4+. The researchers used glancing-angle x-ray absorption near-edge structure (XANES) to find that the 3+ state of cerium is much more prominent at the surface. Somewhat surprisingly, this result was largely independent of the zirconium concentration and of the surface orientation. “The relationship between the Ce3+ on the surface and catalytic activity remains a mystery,” she said. 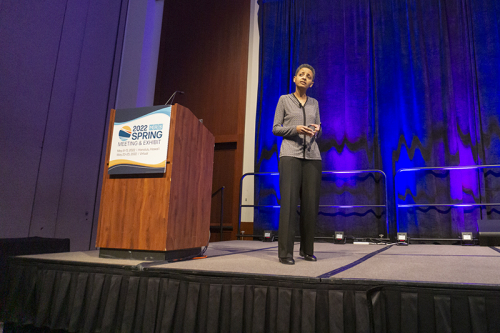 The final example involves not electrochemistry but thermochemistry, thermally cycling non-stoichiometric perovskites to produce hydrogen. At “fiery” temperatures as high as 1500°C, entropy drives thermal reduction and oxygen release from the materials. Upon quenching to a lower temperature, perhaps 800°C, the material reacts with steam and CO2 to form H2 and CO.

The second process is driven primarily by enthalpy. This driver led Haile and her team to explore materials such as “STM55,” SrTi0.5Mn0.5O3. To achieving the right balance between reduction and oxidation to improve the production rate per cycle, she said, “It’s really important to recognize that the thermodynamics govern the fuel production rate. The whole thing is about thermodynamics.”