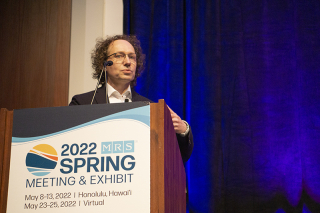 In the MRS Communications lecture on Monday, Andreas Lendlein of the University of Potsdam, Germany, delivered a fast-paced overview of his research on shape-memory polymer materials, with a special focus on his recent work on a system inspired by the Venus flytrap plant. Shape memory polymers are polymers that, having been deformed, can be returned to their original shape through application of an external stimulus, such as a change in temperature.

Lendlein started with his work in biomedical applications, where he looked for ways to support the surgeons who do minimally invasive surgeries using micro-instruments. Among the many challenges of doing procedures like colon surgery with micro-instruments is the need to precisely tie sutures inside the body. To that end, Lendlein and colleagues developed sutures made of shape-memory polymers that would tighten themselves into pre-programmed knot shapes in response to the temperature of the body. The resulting knots exert pressures five times higher than those tied by hand.

Moving on to the realm of automotive applications, Lendlein shared his work developing a triple-shape polymer that can change from one shape to another, both fixed by physical crosslinking, and then to a third shape defined by covalent crosslinking. Such a material, which could be incorporated into the body of a vehicle, can be deformed and then restored to the desired shape using something as simple as a heat gun. Lendlein also discussed the development of shape-memory polymers for self-healing coatings for cars, in which scratches could essentially iron themselves out with a little heat. 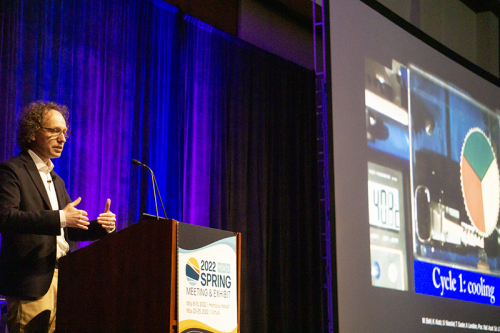 Lendlein presented several other examples from his work with shape-memory polymers inspired by and developed for various applications: photo-sensitive shape memory polymers were developed to close tiny lamella in front of a window to selectively block light on bright, sunny days for active light control; fibers coated in a shape memory polymer enabled an origami hand robot in which the fingers can bend and stretch in multiple directions; and non-continuous actuators with fine control were created by combining shape memory polymers responsive to different temperatures in a device.

For the final section of the talk, Lendlein turned to his work on bio-inspired materials, where he uses the plant kingdom as inspiration. He discussed the Venus flytrap plant, which can snap shut in 300 milliseconds when triggered by an insect brushing against fine hairs inside the trap and displacing water on its surface, switching the lobes from a mono-stable to a bi-stable state. Using that biological system as a starting point, he and colleagues tried to mimic it in a technical system, modeling and then fabricating three-dimensional films of shape-memory polymer in the form of truncated tetrahedra. Informed by their models, the researchers determined that when the slope of the tetrahedra was 30 degrees, the film was mono-stable, but it was bi-stable when the slope was 45 degrees. They were then able to program the 30-degree film to take a 45-degree form at a lower temperature, allowing them to switch between mono- and bi-stable states by changing the temperature.

In closing, Lendlein encouraged researchers to approach with open eyes the rich Hawaiian environment outside the conference center, receptive to the hundreds of thousands of possible ideas to be found there in nature.