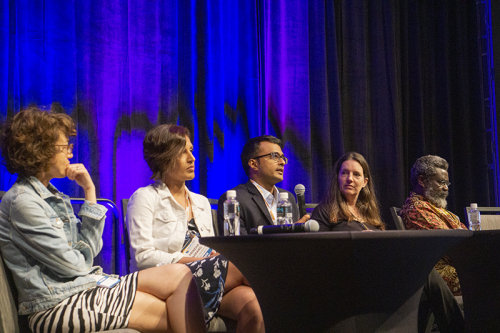 MRS honored this year’s award recipients for work ranging from ultrafast camera shots to disease-diagnosing nanoparticles to a web of intercontinental outreach. MRS Awards Committee Chair Suveen Mathaudhu of the Colorado School of Mines hosted the awards session. As in past years, each recipient proceeded to deliver a talk about their work. Afterwards, the awardees sat for a panel discussion with the audience.

Annamaria Petrozza of the Italian Institute of Technology received the Innovation in Materials Characterization Award. She talked about her group’s work with a class of materials known as metal halide perovskite semiconductors. Used in devices such as solar cells, these materials have some unusual properties. Even with defects in the materials’ structures, electrons carrying charge lasted surprisingly long: a property that is often a marker of more efficient devices.

Petrozza said her group’s work has focused on trying to understand what could cause those long-lived electrons. Theoretically, it was possible that the defects could trap electrons and temporarily store them. By setting up an ultrafast camera, Petrozza and her colleagues were able to provide evidence that the electrons were indeed being trapped. She said the group was now working on finding how metal halide perovskites could be more stable, and she said they hoped to gain more insight on their structure by probing them with ultraviolet light.

Molly Stevens of Imperial College London received the Mid-Career Researcher Award for her group’s work with applying nanomaterials to diagnosing diseases. Her group, she said, was an interdisciplinary collection of everyone from materials scientists to surgeons to physicists to mathematicians. Part of their work sought to design nanoparticles that could diagnose diseases, including HIV, Ebola, tuberculosis, and Covid-19, earlier than healthcare workers or technologies can do today.

One problem with trying to design nanoparticles, she said, is that there previously had been few techniques that could study one nanoparticle at a time. So, Stevens spoke about how her group had invented a new method: corralling a nanoparticle in an optical trap, allowing researchers to measure the particle’s individual chemistry. This method promised to ease the task of developing more sensitive nanoparticles, she said, and it would soon be available commercially.

Prineha Narang of Harvard University received the Outstanding Early Career Investigator Award. She talked about her group’s work with materials that display quantum properties. In particular, shining light – everything from microwaves to x-rays – can illuminate such quantum materials into new states of matter. That poses a challenge, Narang said, because traditional methods of examining a quantum material work best when the material is in equilibrium, and these new states of matter are often far from equilibrium.

Therefore, Narang talked about how her group was thinking about how to take existing approaches – ranging from condensed-matter techniques examining groups of atoms, to methods that look at individual atoms – and modifying them to look at states of matter that were not in equilibrium. By combining these various methods, she said, future researchers would be able to investigate these bright new phases of matter.

Kwadwo Osseo-Asare of The Pennsylvania State University received the MRS Impact Award for his contributions to building a global materials science community. He delivered a talk titled, in translation, “When a single tree encounters strong wind, it breaks,” a proverb from the Ga language in Ghana. To Osseo-Asare, this proverb signifies the value of the academic family. He said he first learned that value in his early years as a graduate student and as an early-career researcher studying applications of colloids, when his students helped him acquire a valuable grant.

Osseo-Asare then raised another Ghanaian proverb, this one from the Akan language: “It is through the tree that the vine sees the sky,” In this spirit, Osseo-Asare sees the academic family as crucial to his outreach work. He spoke of how he, his students, and their students in turn had all helped cultivate collaborations with institutions from Nigeria to Brazil and from Japan to Ghana. African proverbs like these, he said, can help teach people about materials, promoting understanding and creativity amongst teachers and students alike.

Aditya Sood of the SLAC National Accelerator Laboratory received the MRS Postdoctoral Award. Sood talked about how he and his colleagues wanted to watch the processes at work inside computing devices as they switched from one state to another. To do this, they designed an ultrafast camera that shot electrons through a material and captured the resulting diffraction pattern. That camera was sensitive down to 100-femtosecond-long “frames.”

Sood compared their camerawork to filming a horse in motion to see if the animal could lift all four hooves off the ground at once. Sood and his colleagues’ horse was vanadium dioxide, a semiconductor, as it switched between two states. Thanks to their camera’s speed, Sood’s group was able to see, in detail, a brief intermediate state between the two. Sood said that stabilizing that intermediate state may help create more energy-efficient electronic switches.

The second recipient of the MRS Postdoctoral Award was Mattia Biesuz of the University of Trento, who was unfortunately unable to appear in person. Biesuz earned the award for “flash sintering phenomena and processes in ceramics.”

The Innovation in Materials Characterization Award has been endowed by Dr. Gwo-Ching Wang and Dr. Toh-Ming Lu. The Mid-Career Researcher Award is made possible through an endowment established by MilliporeSigma (Sigma-Aldrich Materials Science).