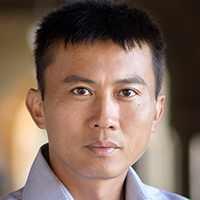 Yi Cui of Stanford University delivered a Symposium X lecture on Thursday. A materials scientist, Cui discussed nanotechnology applications in sustainability efforts, such as reduction of fossil fuel use and pandemic mitigation efforts. Just in his lab alone, they use nanotechnology to design better batteries, medical face masks, and clothing.

One thrust of his group’s research is “trying to reinvent the battery,” said Cui. Over the last 15 years, Cui’s group has tackled questions such as how to improve the energy density of batteries, how to extend their lifetime, how to reuse and recycle them, all while making sure the technology is safe. He sees his work as the next generation to lithium ion batteries, now in widespread use in portable electronics and electric vehicles, and whose pioneers received the Nobel Prize in 2019.

Cui has developed new batteries from higher energy density materials by optimizing the geometry of the materials inside the batteries. For example, his group has made lithium-ion batteries with anodes made of silicon nanowires instead of the conventional graphite. However, silicon poses design challenges, as it expands several times its original size as the battery discharges. This can cause the silicon nanowires to crack and break, so Cui’s group has developed a shell-like structure around the silicon to avoid the material fracturing. They have also made strides in developing lithium metal batteries—a “holy grail” for the field because of the metal’s theoretical energy density. But in reality, lithium metal is challenging to work with because the metal expands dramatically and breaks easily. To prevent this, Cui’s group has developed hollow nano-capsules for lithium metal to sit in.

His group has also developed new techniques for imaging the dynamics inside batteries. In 2016, they developed the technique of cryogenic electron microscopy, which freezes material and images the material at atomic-scale resolution.

Nanofibers can also make high quality air filters, such as those needed in medical face masks, said Cui. His group has achieved filters with 60% porosity made from fibers 10 µm in diameter, spaced apart by 15 µm. This produces a breathable mask using a tiny amount of material.

Clothing that cools or heats the wearer could also make a significant difference in energy consumption, said Cui. His group has designed a polyethylene textile that is more transparent to the infrared radiation produced by the human body compared to cotton. In tests, they found the material caused the wearer’s skin temperature to be nearly 3°C cooler than when the person was wearing cotton. He pointed out that changing heating or cooling by a single degree Celsius can, on average, alter energy usage by 10 percent.

It’s important to get these innovations in the hands of consumers quickly, said Cui. His company Amprius, founded in 2009, has commercialized the silicon nanowire anode battery technology. He has recently founded the startup Eenotech for commercializing the polyethylene material, whose spinoff company LifeLabs Design will sell a limited quantity of clothing made from the polyethylene material this summer.

At the end of 2020, Cui became the director of Stanford’s Precourt Institute for Energy. As director, Cui oversees a range of research spanning many fields. In addition to materials and other hard science research, the institute weaves together researchers studying sustainable finance, policy, human behavior, artificial intelligence, and more.