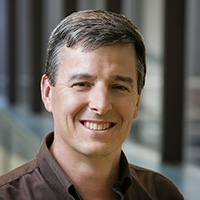 John A. Rogers’ research has expanded from bendable, stretchable electronic systems that mount on the surface of the skin like temporary tattoos to include cellular-scale electronic/optoelectronic devices that inject into the deep brain and thin microfluidic cuffs that softly encircle the surfaces of peripheral nerves.

Much of the motivation for this work is that some medical disorders are difficult to treat with traditional pharmaceutical approaches, Rogers said, which has led to the rise of the concept of bioelectronic medicines. Addressing these disorders with various engineering platforms—such as deep brain stimulators to treat depression and Parkinson’s—is becoming possible because of the collaborations of researchers in different fields, in many cases with materials science in the lead. Rogers himself has appointments in the department of materials science and engineering, electrical and computer engineering, chemistry, biomedical engineering, mechanical engineering—and neurological surgery.

Rogers foresees a major continuing role for materials scientists, not only in systems that offer electronic interfaces but also optical, microfluidic, thermal coupling schemes, and others. In terms of functional capabilities, advances in materials for these multimodal platforms could lead to approaches in restoring or extending organ function through interfaces that include both diagnostic and therapeutic capabilities, in closed feedback loops. New approaches to patterning and processing known materials and in combining them together in unusual ways serve as additional routes for further miniaturizing implantable devices of these types, and for developing soft, stretchable platforms that more naturally interface with soft biological tissues. Related advances in materials science enable complex, extended network architectures and associated capabilities for “full 3D volumetric integration” with living organisms. Other directions include bioresorbable active and passive materials for implantable devices that function for a time period that matches a biological process such as wound healing, and then naturally disappear to remove unnecessary device load from the body without a secondary surgery.

Creating electronic materials and integrated circuits that can interface with the brain, biology’s most sophisticated electronic system, serves as an example of work in this broader area, where biocompatible semiconductors and other supporting materials must come together to support high performance operation. “Our feeling is that the ultimate solution is a hybrid one, where diverse classes of both organic and inorganic materials heterogeneously integrate into systems where the best properties of the best materials enable the highest levels of function and performance at the biotic/abiotic interface.”

This concept of hybrid electronics requires attention not only to materials but also to materials structures and materials interfaces. In his talk, Rogers showed examples of nanoscale forms of device-grade monocrystalline silicon—as nanomembranes and nanoribbons created directly from bulk wafers. He demonstrated routes for forming bulk quantities of such materials and concepts in manufacturing science that allow their deterministic assembly into layouts and formats that serve as starting points for constructing functional systems. He demonstrated how devices formed in this fashion can interface across large areas of the brain to record extended electrical processes associated with seizures, as well as responses to auditory and visual stimuli, in a range of animal models, from rodents to non-human primates. “The unmatched spatio-temporal resolution of these systems allows their use as tools to facilitate research into fundamental aspects of neuroscience,” Rogers said, “and, potentially in the future, as advanced diagnostics for various kinds of surgical operations like those used to treat chronic forms of epilepsy.”

Rogers also detailed some research that supports the use of optical forms of neuromodulation, as cellular-scale, injectable light sources that operate in a wireless fashion to turn on or off targeted neural circuits in freely behaving animal models—for studies that improve our understanding of basic processes in the brain. He believes that this broader frontier in neuroscience will rely critically on advanced neurotechnologies built upon innovation in materials science.