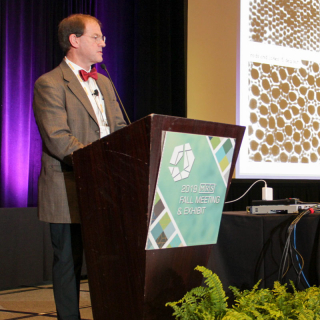 As a medical doctor as well as a professor of neurology, neurosurgery, and bioengineering, Brian Litt was well positioned in his Symposium X talk to share the phenomenal impact that neural interfaces are having on patients’ lives. These devices owe much of their success to the brain’s ability to adapt to their still-primitive signals, he stressed. “It’s because of neuroplasticity patients that can actually use this stuff.”

Litt illustrated the disappointingly low resolution available from retinal implants, and the distorted sounds available from a few frequency bands from a cochlear implant. He also briefly described advances in speech synthesis and motor control through human-machine interfaces. In addition, he listed a host of diseases that might be treated through manipulation of peripheral nerves. “While these are amazing accomplishments,” he said, “there’s a lot more to be done.”

Litt encouraged materials scientists to contribute their expertise to these highly interdisciplinary problems: “We need both incremental and disruptive innovation.” He noted the importance an institutional framework that includes animal models and an infrastructure for ultimately translating innovations from the bench to the clinic, as well as funding for commercialization. “These don’t all have to be at your institution,” he stressed, although he noted that “at Penn, we have most of this together.”

Technical challenges include smaller sensors with higher resolution and exchange of high-bandwidth signals between embedded devices and the outside world. The devices themselves can create tissue injury and degrade in the biological environment. In particular, biocompatibility requires mechanically similar materials to reduce damage during inevitable tissue movements.

All devices that monitor or stimulate neurons face many common issues, but there are additional challenges for implants in the brain, such as those Litt and his collaborators have explored for epilepsy. Litt chronicled one patient’s often unsatisfying history, which included previous crude procedures and failures to identify the precise brain region that initiated seizures. Litt and his colleagues eventually located and laser-ablated the correct region and eliminated daytime seizures, but limitations of imaging, tissue damage, and poor understanding of the disease neurophysiology remain frustrating.

For analysis, Litt envisions combining onboard processing with transmission of salient data to the cloud for more intensive processing. There is also room to improve the algorithms, as illustrated by a recent USD$25K competition to detect or predict seizures from neural data, which significantly improved on previous methodologies. 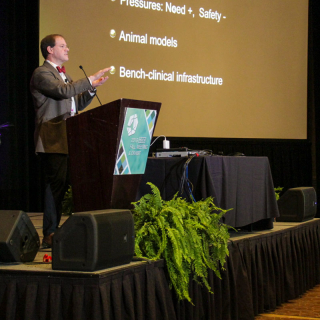 Litt listed hopes for future brain technology, including “native delivery” that avoids invasive surgical procedures. Flexible targeting of denser electrodes, or even moving electrodes, could help zoom in on areas of interest. He also mentioned several promising ideas, many discussed at previous MRS meetings. These include electrodes that are flexible or can be injected into the brain, although he stressed the importance of probing the deep folds of the brain and not just its surface. Another proposal would exploit the blood vessels to deliver injected devices that can later be mapped.

There are many other potential approaches, such as “living electrodes,” magnetically activated liposomes, and microfluidically controlled electrodes, magnetothermal delivery, and ultrasonically activated “neural dust.” Optogenetic manipulation of brain circuitry is “absolutely possible,” Litt said, although the path to human use remains undefined. Ultrasound can also directly perform neural modulation or can be used to direct light for optogenetics.

“There’s tremendous opportunity,” Litt said. “What we’re doing is impressive, but still crude. Even this is life-changing.”