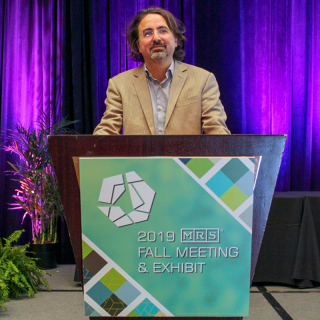 Materials scientists have contributed to innovations in delivery of drugs, but only rarely to the drugs themselves. Francesco Stellacci described the efforts of his group to develop drugs against viruses. Viral diseases kill millions of people each year, mostly in the developing world, and new viruses are continually evolving or crossing over from animal reservoirs.

Although the best remedy is vaccines, these are not available for many important viruses. Once a disease is established, Stellacci said, there are only two drugs available: the cocktail against HIV, and drugs for Hepatitis C. These antiviral drugs work by interfering with specific machinery inside the cell that the viruses exploit.

A second approach is directly destroying viruses before infection, but such virucidal agents are toxic. A third strategy is blocking viral attachment to cells with a virustatic compound, such as heparin, that coats the virus. This idea had been explored in an HIV-blocking cream, but in a clinical trial it actually increased the rate of infection by concentrating viruses and releasing them into the bloodstream.

For Stellacci the key thermodynamic problem is that binding is reversible when the concentrations decrease. His inspiration was to build on binding by irreversibly opening up the virus. “We can always take a reversible process and build a cascade of events that make it irreversible,” he said, just as reversible electrochemistry becomes irreversible during corrosion.

The ligands through which viruses attach to cells vary widely, but among viral families there are a few that are highly conserved. These “attachment ligands” point to cell surface components that also rarely mutate, such as sialic acids (bound by influenza and others) and sulfonic-acid–bearing heparan sulfate proteoglycans (bound by dengue, Ebola, herpes simplex, HIV, HPV, and others). Targeting these ligands could allow broad-spectrum antiviral drugs. 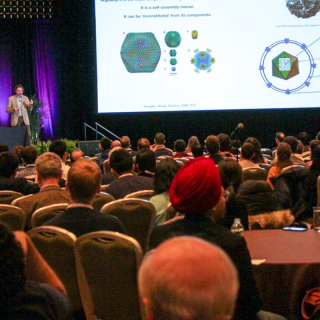 Stellacci’s idea was to introduce multiple targets for attachment-ligand binding (initially sulfonic acid groups), each tethered by a large, flexible, hydrophobic chain to a common platform (initially a gold nanoparticle). The enforced proximity of the hydrophobic chains will create local pressure that could induce the virus to break up.

Experiments confirmed that this structure killed viruses in vitro at nanomolar concentrations, which is sensitive enough to be interesting but could have been achieved with heparin. To demonstrate irreversibility, Stallacci’s team developed an assay by killing 99% of the viruses and then highly diluting the mixture to see if the inhibition persisted. This assay proved that the effect was indeed irreversible for a broad spectrum of viruses.

The researchers went on to demonstrate effectiveness against HSV-2 in human vaginal tissue ex vivo. They also successfully treated mice with respiratory RSV infection in vivo using an intranasal spray.

Importantly, Stellaci’s team showed that the initial gold-nanoparticle anchor was not necessary, achieving similar effectiveness with a cyclodextrin acting as a rigid backbone for the sulfonated chains. This permits larger scale production, which let the researchers demonstrate that treatment releases the viral DNA payload, confirming the breakup of the viruses.

Although the results so far have been positive and support further experiments, Stellacci cautioned that there is still much work to be done, for example to deliver the necessary local and global concentrations in large animals. But he stressed that even if this particular approach falls short, the work demonstrates the effectiveness of using materials-science principles in drug design. Stellacci also urged researchers not to limit their attention to the problems of rich populations.