The MRS Awards session consisted of 10-15 minute “lightning talks” by each recipient. This was followed by a panel discussion in which the materials scientists responded to audience questions about the inspirations and challenges they encountered on their path to their award-winning research. 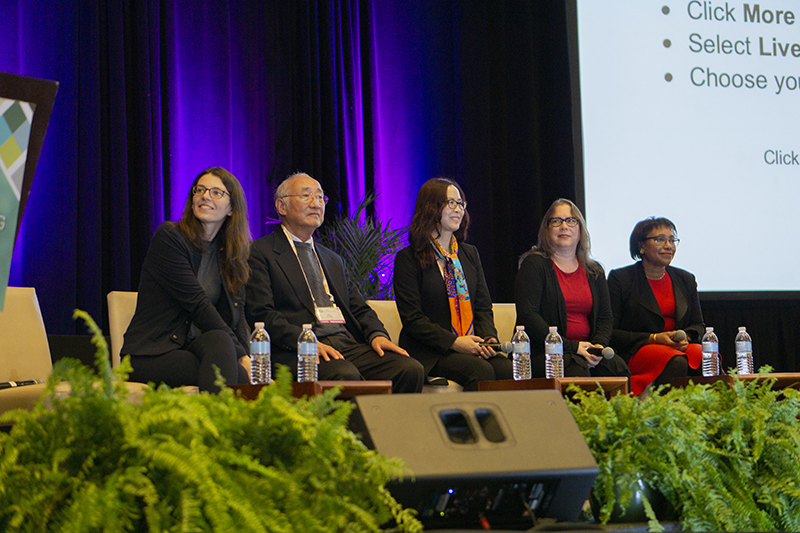 “for her contributions to the science, engineering and applications of self-assembled macromolecular systems”

Paula Hammond’s group creates custom nanoparticles using conformal layer-by-layer growth of polyelectrolytes or other materials around a core that could contain a drug or an imaging agent. The layer properties are chosen to tune the stickiness of the particles in different environments. In one example, a particle containing a chemotherapy drug was protected by an outer layer that was stripped off in the acidic tumor environment. The particles can also be decorated with hyaluronic acid that binds to a receptor that is overexpressed in tumors. The 40-fold higher accumulation in mouse lung tumors and release of RNA extended the lives of the mice. Hammond also showed other particles that stay on the cell surface to release their payload to neighboring cells, as well as particles tailored to infiltrate cartilage to treat osteoarthritis.

“for outstanding contributions on the study of anisotropic nanoscale materials, transformation and application”

A Golden Time for Nanotechnology

Catherine J. Murphy and her group have developed controlled production of gold nanoparticles using seed-mediated growth in aqueous solutions. This technique gives them control of the shape as well as the size of the particles. Both attributes modify the particles’ optical properties, which arise from plasmon resonances of the sub-wavelength particles. Murphy has explored the detailed growth mechanisms, including the roles of surfactants and silver in the final particle shape. She has also investigated the biological effects of nanoparticles from the molecular and cellular level up to the ecosystem level, where they can alter the populations of various microbial species.

“for outstanding contributions on the study of anisotropic nanoscale materials, transformation and application”

Haimei Zheng and her colleagues use transmission electron microscopy with specialized liquid cells to study how materials transform between states in real time. Her studies provide insight into the electrode-electrolyte interface in batteries, catalytic processes, and other important problems. Zheng often sees individual events that deviate from textbook theory. For example, depending on surfactant concentrations, Pt-Fe particles can grow by attaching to the end of chains, rather than classical nucleation above a critical size where volume free energy overcomes surface free energy. Cobalt oxide nanoparticles tend to form two-dimensional nanosheets, which can be modeled by including an edge free energy.

“for pioneering contributions to the quantum theory of molecules and solids, especially the Kohn–Sham formulation of density functional theory”

Almost 60 years after Lu Sham and his colleagues developed the density functional theory (DFT), it remains a core technique for calculating electronic structure. Pierre Hohenberg and Walter Kohn had showed that the ground state energy of a complex atomic arrangement could be described in terms of the spatially dependent electron density. Kohn and Sham reformulated these results in an intuitive and useful effective potential for a single-electron Schrödinger equation with an effective potential. “Lots of people didn’t believe it at the beginning,” Sham said, but it has been adapted for a wide variety of calculations, including for quantum phase transitions.

Silvia Vignolini’s group seeks to understand how nature creates color using nanoscale structural arrangements of materials that are renewable and biodegradable. In particular, they have exploited helicoidal structures featuring periodically varying orientations of fibers. The fibers are composed of polysaccharides such as cellulose, which is safe and available in large quantities. Vignolini showed a video of color rapidly popping up in an evaporating liquid when cellulose nanocrystals self-assembled. The materials can be created over large areas, printed in patterns, and even made into holograms. They can also be eaten, although Vignolini said they taste like paper.