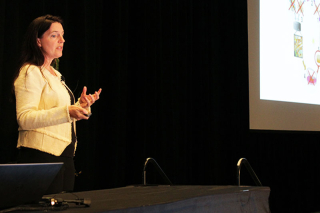 In her Symposium X presentation, Molly M. Stevens described a wide range of examples from her group employing materials in biomedical applications, as well as applying advanced materials characterization techniques to understand and improve the materials. She is also helping direct a project to bring advanced diagnostic capabilities enabled by cell phones to people in Africa.

Developing materials for regenerative medicine requires a balance between the complexity of the materials and the need to translate them into clinical use, Stevens stressed. A simple system that exploits the body’s natural regeneration can be effective, as illustrated by a calcium-contained gel that creates an in vivo bio-reactor to grow bone. “Sometimes you can get away with very simple materials systems,” she said, “but there are many other applications where that’s not going to work.”

Stem cells, for example, vary their differentiation in response to numerous mechanical and chemical cues, and different shapes of adhesion for stem cells were known to direct them toward bone-like or fat-like differentiation. Stevens and her research team used high-resolution microscopy, focused-ion-beam, and other tools to reveal how the adhesion geometry affects the cell-substrate interface, as well as the relevant developmental pathways.

They also studied the hierarchical organization of bone, and the relationship between its organic and mineral components, to inform scaffold design. In addition to providing a porous environment matched to the cells, the chemical influences can be profound, as Stevens showed with recent successful bone scaffolds incorporating strontium. She is also collaborating with chemists to create a versatile toolbox for functionalizing polymers in various ways, for example so they interact directly with cells in the body, she said, “because a lot of these conventional polymer systems are not necessarily inclined to do that.”

Stevens also collaborated with researchers from the Howard Hughes Medical Institute to explore arrays of very small needles made of porous silicon. The nanoscale porosity of the needles enables delivery of molecules, because the needles induce formation of vesicles that are taken into cells. Incorporation of a vascular growth factor in this way induced growth of new blood vessels.

The needles can further be used for monitoring tissue. Stevens showed on example where a needle-laden patch loaded with a biomarker identifies the margins of a tumor to assist surgeons. The needles were also effective for introducing quantum-dot biosensors the group had previously developed for lab drug screening, with the potential for real-time, in vivo, intracellular monitoring.

In her final topic, Stevens described the use of nanoparticle-based diagnostics in developing countries. The widespread availability of cell phones and their high-quality cameras, she said, creates an “opportunity to help democratize access to health care.” She is deputy director of a center that aims to implement these tools for early diagnosis.

For example, the center developed a tool based on nanoparticle-based “nanozymes” that are more temperature-stable than traditional enzymes and can directly detect one of the coat proteins of HIV at the point of care. “We were able to develop the most sensitive point-of-care test for HIV that had been developed to date.” She and her colleagues are working to distribute the test in South Africa, where workers have already performed 40,000 tests.