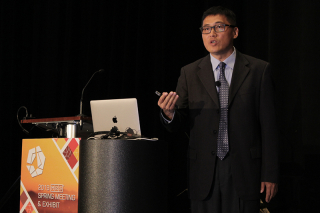 Hongyou Fan started by graciously thanking his mentors, and his students who “make our science, ideas, and dreams come true, and these are the heroes behind this honor.” He then split his talk into three parts focusing on the pathways he is pursuing in the area of self-assembly of functional nanomaterials.

The first is surfactant-assisted nanoparticle self-assembly and optical coatings. He started by discussing the motivation behind this research. Traditional coating-manufacturing techniques like sputtering and chemical vapor deposition come at a cost, he said. They need vacuum environments, expensive and bulky equipment, and toxic precursors. He wanted to come up with a simple, low-temperature coating process that could be used on delicate substrates, and ideally wanted to use green chemistry. So he decided to make nanoparticles of coating materials, which can be used to make suspensions that can be printed or roll-to-roll coated on large areas.

He and his colleagues start with an oil-based dispersion of metal nanocrystals. The particles are functionalized with organic ligands, which keep them separate and make them hydrophobic. By mixing the nanoparticles into an aqueous surfactant solution, and then evaporating the solvents, the researchers get nanoparticle-micelles dispersed in water. Fan showed that he has made nanoparticle-micelles using various materials—metals, semiconductors, and perovskites—and of different shapes and sizes. Then, using processes such as dip-coating and inkjet printing, he can use the nanoparticle-micelles to make optical coatings with tunable properties.

Fan then moved on to the second part of his talk. This involves the use of the surfactant-enabled self-assembly method to make nanocrystalline superparticles with photoactive molecules. Fan uses porphyrin, an organic molecule in chlorophyll that absorbs sunlight and converts it into energy. Nanocrystalline assemblies of porphyrin could find use in photocatalysis, phototherapy, sensors, and dye-sensitized solar cells, he said.

Adding different functional groups to the ends of porphyrin molecules and changing the pH of the surfactant solution gives self-assembled porphyrin nanostructures of various shapes. Fan showed a gallery of images showing various morphologies and dimensions of nanocrystals like one-dimensional (1D) rods and wires, nanodisks, hexagonal rods, and octahedra. He went on to show how redox reactions can be used to deposit platinum on 1D porphyrin nanowires and then the porphyrin can be removed to give hollow platinum shells. Such hollow metallic nanostructures of various shapes could find applications in water splitting, sensors, and phototherapy.

In the last part of his talk, Fan introduced his recent research on pressure-induced nanoparticle assembly, which was inspired by the fast, cost-effective embossing process. “What would happen if we applied pressure to the nanoparticles?” was the question he and his colleagues wanted to answer.

So they sandwiched nanoparticles between diamond tips and applied controlled pressure to them. When gold nanoparticles are compressed like this, they sinter together to form a bundle of nanowires of uniform length. But this only happens above a threshold 9 GPa of pressure, Fan has found by studying the nanoparticle assembly under pressure using in situ synchrotron x-ray scattering. At pressures below 9 GPa, particles are forced together but they spring back when the pressure is removed. Depending on the orientation of the original nanocrystals, they can form different dimensional nanostructures. “If you start with 3D particle assemblies you can form interconnected 3D porous structures,” he said.

Fan ended by talking about the importance of MRS in his career. He reminisced about the first meeting he attended as a graduate student, going on to organize symposia and then become meeting chair. Now an MRS Fellow and member of several MRS committees, Fan stated how these engagements have exposed him to new ideas and strategies and meaningful connections. “Overall it supplies tremendous inspiration for my career, research and work,” he said. After this mid-career award, he hopes to continue his research momentum and to serve the MRS community, he said.

Fan’s award citation is “for outstanding contributions in nanoparticle self-assembly of functional nanomaterials and for leadership within the materials community.”