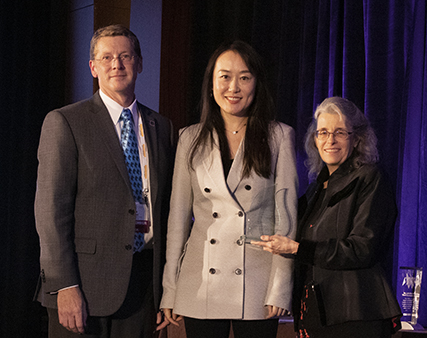 Late Thursday afternoon, MRS members who had not yet headed home from the conference were treated to a wonderful lecture from Laura Na Liu, who was selected to give The Kavli Foundation Early Career Lecture in Materials Science due to her outstanding work in the field of plasmonics, specifically DNA-based dynamic plasmonic nanosystems. She calls her work DNA origami. For this origami, hundreds of short DNA strands are formed into complex two- and three-dimensional architectures. These form templates for functionalized DNA capture strands that extend from the origami, and because of the nature of DNA binding, these functionalized capture strands can be placed with incredible accuracy, and be used as the basis for complex nanosystems with optical functionality. With these nanosystems Liu is successfully mimicking the motor-like functions present in biological cells, such as rotary motors like FOF1-ATP synthase, and linear motors like Kinesin-1, Myosin, and Kinesin-5.

Liu’s first example of her work was a system with rotation. Two of the DNA origami bundles form a cross-like structure, with functionalized gold plasmonic particles on its top and bottom, forming a rotary system. These can form chiral left-handed and right-handed configurations. When specific DNA strands are added to the solution with the rotary system, they interact with the functionalized capture strands on the DNA origami to cause it to rotate between a relaxed state, a right-handed state, and a left-handed state. Through circular dichroism spectroscopy, these three states can be identified.

A problem with this technique is system degradation because of dilution that comes from adding more DNA strands, so Liu and her team began to experiment with using light as a switch for the rotary system instead. To do this, Azobenzene molecules, which change from a trans configuration to a cis configuration when exposed to UV light, and vice versa when exposed to visible light, were used. These molecules were placed between DNA bases so the functionalized DNA could change from a hybridized form to a dehybridized form, and vice versa, when light interacts with it. With this, light can change the rotational system from a locked to relaxed state. Other methods of control such as magnetic or pH control are being investigated as well. This kind of rotational system can be functionalized to detect several compounds in real time—cocaine and ATP were given as examples—when used in conjunction with circular dichroism spectroscopy.

Liu went on to show that this technique could be used for more than just changing the angles of one of these structures, but for full rotation as well. To do so, a DNA origami ring has 8 pairs of complementary strands placed across from each other, and by adding the correct paired strands to the solution, a separate piece of DNA origami can rotate around this structure.

Using the Kinesin-5 protein that moves microtubules in a cell as a model, Liu developed a system plasmonic sliding system as well. Two gold nanocrystals are placed between two DNA origami pieces, and act as rollers between them. Using the same technique as before, these two nanocrystals will slide the origami pieces in opposite directions.

To conclude, Liu reiterated that through manipulating DNA and plasmonics, artificial devices can be created. As a next step, Liu wants to bring the various systems she has developed, both rotary and linear motors, together to make a single device.