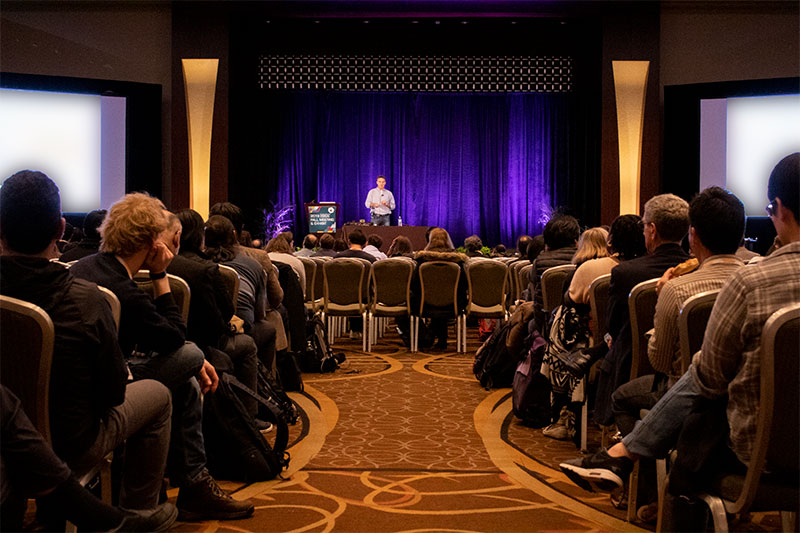 Despite years of effort, scientists have yet to agree on a physical system for realizing the tremendous potential of quantum computing. Erik Bakkers described a relatively new strategy based on networks of epitaxial III-V nanowires that could exploit exotic collective electronic excitations to enable these applications.

In principle, quantum computing provides exponential increases in computational power from a relatively small number of quantum bits, or qubits. Such qubits can simultaneously represent two possible quantum states, but only until interaction with the environment destroys their coherent relationship. “Decoherence is the big problem of a quantum computer,” Bakkers said. “This is really the fundamental bottleneck.”

Bakkers and his collaborators have been exploring a strategy for overcoming this challenge using “Majorana fermions,” which are their own antiparticle and should be highly resistant to decoherence because they have “no charge, no spin, and no energy.” These entities were proposed decades ago as a model for neutrinos, but have recently been suggested to occur as quasiparticles in condensed-matter systems, in particular in one-dimensional superconductors. “If we can find this particle and control the quantum state, we could have very long decoherence time,” Bakkers said.

His group has been looking for this elusive particle in the proximity-induced superconductive state of InSb nanowires, whose electrons have very low effective mass, strong coupling to magnetic fields, and high spin-orbit coupling. Tunneling spectroscopy revealed the expected conductance peak in the center of the superconducting energy gap. “The data is all consistent with having Majoranas,” Bakkers concluded, although the first experiments were limited by a high density of states in the gap.

To make the wires, Bakkers’ team used an established method in which a ball of metal forms a eutectic with a semiconductor, and subsequent layer-by-layer growth on (111) facets produces long, highly uniform single-crystal nanowires. They developed ways to reduce As and P impurities, grow wires up to 60 µm long, and improve the interfaces, achieving low-temperature mobilities as high as 60,000 cm2/V·s. These nanowires produced extremely clean-induced superconducting gaps, and a magnetic field produces a clear mid-gap state with the predicted quantum conductance of 2e2/h. “We believe this is a very strong signature of having these Majorana states,” Bakkers said.

Exploiting these states for quantum computing will require fashioning these high-quality wires into loops and other circuits. Bakkers showed how to create such structures within the evacuated growth chamber. The gold balls that seed the nanowire growth were defined lithographically on (111) facets of a V-groove etched into a (100) substrate. Choosing the size and location of these seeds let the team create long wires that cross, merge, or shadow each other during later deposition.

In particular, Bakkers described “hashtag” structures (#) with pairs of InSb wires from opposing faces that merge to make “very high-quality wire-wire junctions,” although there can be twin boundaries at the interfaces. Painstakingly dislodging these structures in the electron microscope with a micromanipulator and transferring them to a separate substrate for electrical contacting allows their electrical characterization. The junctions showed the quantized conductance characteristic of ballistic transport, and the oscillating conductance as a function of magnetic field through the loop of the hashtag indicated a coherence length as large as 60 µm. Majorana-based qubits will require somewhat more complex structures, but these appear to be feasible.

Still, Bakkers noted that these techniques are “nice for academic studies, but not really scalable.” He and his collaborators are therefore exploring an alternative future path based on in-plane selective-area growth to create arbitrarily complex circuits in vacuum.