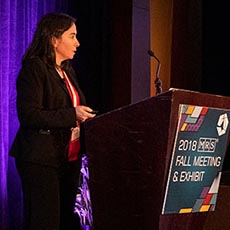 What Is Next for Solar PV Technology?

Despite all the excitement now directed at perovskites as a candidate material for solar cells, Mariana Bertoni made it clear at the outset of her Symposium X presentation Wednesday that her vision of the future of solar photovoltaic technology is firmly grounded in silicon. Beginning with a look at progress in lowering the cost of solar technology, Bertoni then provided a tour through the many challenges and obstacles to its reaching the goal of becoming a mainline energy technology. The breadth of these challenges from basic materials performance to integration of the technology into daily life is evident from one many of us might not have thought of—aesthetics. For example, rooftop solar installations are, to be blunt, ugly, which can dampen consumer acceptance. As a result, solar shingles that address this issue are now coming online.

The world’s installed solar energy capacity is rapidly growing, up from 8 GW in 2007 to 402 GW in 2017 and is on track to add 120 GW/year after 2019, which will result in 1 TW installed capacity (residential, commercial, and utility) by 2023. Looking at the levelized (lifetime) cost of solar photovoltaic energy from 2009 to 2017 reveals that this cost has dropped so significantly that the cost per megawatt-hour for utility-scale installations is already comparable to that of natural gas and less expensive than coal and nuclear energy, while rooftop-installation costs remain in the nuclear range. A long-time US Department of Energy cost goal of $1 per Watt, initially greeted with incredulous dismay, was met in 2017, three years earlier than projected, and new reports from China suggest $0.30 per Watt or less will soon be achievable.

Bertoni likened today’s crystalline silicon technology to that of a Ford Model T: it is an established technology that has demonstrated its affordability and its potential but we are just getting started. For example, efficiency is a major performance factor for solar cells. Silicon (single crystalline and polycrystalline) dominates the market today with 90% of market share. In comparison to the theoretical efficiency limit of 29.1%, polycrystalline silicon solar cells were at 21.5% in 2017 and single-crystalline cells up to 26.6%, within 10% of the theoretical limit. Still, increased efficiency remains as a major opportunity area, joining increased yield and lower manufacturing and processing costs, for progress toward $0.03/kW-hr. Long-term performance, degradation, system-level and cell and module integration, and materials design provide further opportunities for cost lowering.

The solar photovoltaic production process begins with ingots or boules and proceeds in stages through wafers, photovoltaic cells, modules, and the installed system. The major cost elements are the silicon wafer (40%), the metallization (10-20%), and the module (comparable to the wafer cost). Among the examples she cited, Bertoni reviewed the use of a spalling technique to avoid the loss of material inherent in using a wire saw to cut wafers from a boule of crystalline silicon. In this technique, pulling a stressor layer attached to the end of the boule cleaves a silicon layer with thickness determined by the stressor layer and there is no material lost, although surface quality remains an issue. Then turning to the metallization process for the silver front contacts in the form of metal fingers that are narrow to expose the silicon to as much light as possible. A particle-filled paste is less expensive than pure silver but has a 10 times higher resistivity. A reactive ink process yields a resistivity comparable to pure silver, and solar cells made in this way have high performance.

When it comes to long-term performance, it turns out that changes in degradation rates are important in determining the power output over time; two different paths to the same power output in the far future can yield different integrated lifetime power production. Bertoni discussed imaging methods to investigate what causes degradation in modules due to module cracking. For example, stress levels concentrated near metal ribbons may depend on the encapsulation method used. Mapping water distribution and its effects in encapsulants is another example. And modeling how sodium from the front glass above the encapsulant diffuses through a module is a third. Interfaces also contribute to long-term performance degradation, with one example being an increase of series resistance with time due to surface recombination resulting from an increasing density of states at the interface.

Bertoni concluded her talk with a discussion of tandem solar cells with a good base cell and a wide-bandgap material with a high efficiency in the upper cell, which provide a way to increase the cell efficiency above 29%. A GaAs-Si tandem is the best current configuration. Even with high efficiency, the system cost can be a problem. Bertoni showed an analysis showing that tandem cells are never the best choice for utility-scale facilities, whereas for residential systems they are viable provided that the GaAs cost is low enough (less than $260/m2). Perovskites can play a role in the analysis if the top and bottom cells are both inexpensive relative to the overall cost of the system. From this, it appears that tandem cells will enter the market and compete with their silicon predecessors. In her final remark, Bertoni put in a plug for machine-learning in the search for new materials.