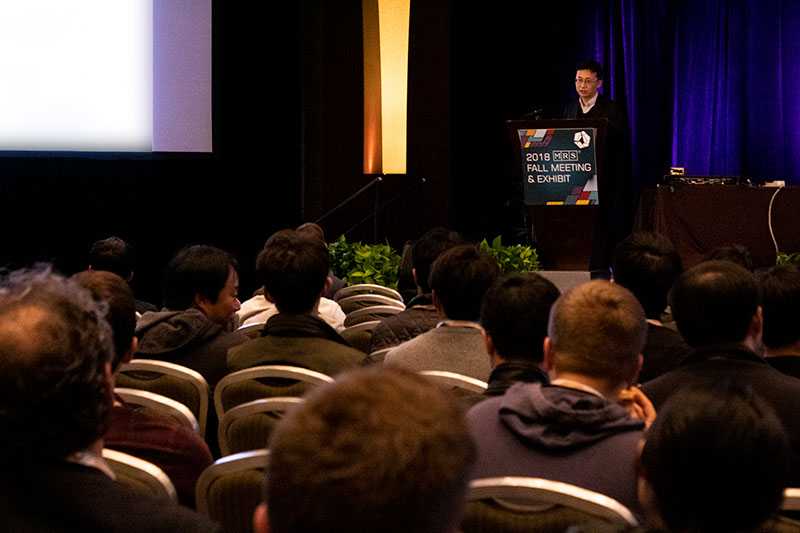 Dae-Hyeong Kim of Seoul National University used three projects from his group to illustrate the potential for flexible and stretchable electronics for medical applications.

Kim’s first example concerned non-invasive monitoring of glucose levels for people with diabetes. Either high and low glucose is dangerous, and levels are currently controlled with frequent, painful blood measurements and insulin shots.

Kim’s research team developed devices to monitor glucose painlessly using sweat, rather than blood. The 100-fold lower glucose concentration is harder to measure, but Kim noted that the sweat and blood glucose concentration are highly correlated. Electronics incorporated in a patch or other device on sweating skin need to be stretchable, however.

The team improved the sensitivity by using nanostructures to increase the surface area. They exploited the same glucose oxidase enzyme used in current glucose strips, which generates electrically conductive species from glucose. This reaction is sensitive to temperature, humidity, and pH, however, so the team integrated sensors for these environmental variables to provide accurate measurements. Kim also noted that accuracy improved when participants followed a well-defined protocol, such as exercise or a foot bath to encourage sweating.

A later-generation device replaced the re-usable patch with a disposable strip, avoiding degradation of measurement accuracy over time. This device also included sensors for heart rate, blood oxygenation, and motion, and can be wirelessly connected to a cell phone or electronics. Kim illustrated monitoring of volunteers over 30 days, showing clear glucose concentration increases after meals, matching well with blood tests.

Ideally the glucose monitor will be coupled to integrated drug delivery. Kim described a transdermal delivery system using microneedles made of a biodegradable polymer containing a drug such as insulin. To control administration, his team has used a protective layer that can be melted away by applying heat to expose the polymer.

In his second example, Kim described an implantable retinal prosthesis. Previous external imagers are bulky and have low resolution, he noted, while fully implanted chips based on rigid silicon technology cover only a small fraction of the visual field and degrade over time due to their poor mechanical match with tissue.

Kim’s group developed a soft large-area image-sensor array based on MoS¬2 and graphene, extending the area using an icosahedral arrangement of patches. The overall thickness of the array was less than 1 µm, and it was connected to a flexible printed-circuit board using flexible cable. Animal experiments showed an evoked potential in the visual cortex reflecting transmission of the detected image. This “proves the system was working quite well,” Kim said.

Kim’s third example addressed heart failure, which reflects inefficient pumping due to erratic and poorly synchronized heart-tissue contraction. Current implanted-device strategies include electrical pacing by localized electrodes, which generally increases pumping by about 10%, or an external mesh that externally compresses the ventricles.

“Our approach combines these two approaches,” Kim said, by creating a flexible, conductive mesh for extended stimulation. Commercially available conductive rubbers are too resistive, so the team developed a material based on silver nanowires, which increased pumping by 50%.

“The effect is quite meaningful, but there are many issues for clinical translation,” Kim noted, mostly related to materials. In particular, the silver wires readily oxidize, increasing resistance, and dissolved silver is toxic to cells and tissues. The researchers solved these issues by passivating the wires with a gold sheath.

They also improved the tradeoff between flexibility and electrical conductivity by modifying the curing process to create phase segregation between nanowire-rich and polymer-rich regions. The resulting material showed up to 840% stretch with a conductivity up to 72,000 S/cm.

Symposium X—Frontiers of Materials Research features talks aimed at a broad materials audience to provide meeting attendees with an overview of leading-edge topics.