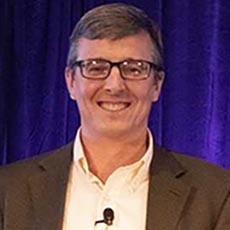 Opening his talk accepting the MRS Medal, John Rogers stressed that the award reflected the contributions of a wide range of other people over the years. These exceptional “students and collaborators are the real winners” of the award, he said.

Rogers then described representative projects on materials and devices that can be integrated with biological systems to provide improvements in human health, whether by reducing costs or improving outcomes. The goal, he said, is to re-engineer the sophisticated electronic devices that are familiar from consumer electronics to improve our understanding of living systems and improve human health.

Integration of electronics with biological systems requires new materials strategies—but not necessarily new materials—that are more compatible with biology. This aspiration can also profit from an understanding of the design features that allow biology to implement important functions, Rogers said, although replicating them exactly is not required. He asked “what kinds of key features can you abstract from biology” to build systems that are dynamic, responsive, reconfigurable, mechanically active, multicomponent, multifunctional, multi-scale, or three-dimensional?

Most of Rogers’ talk explored uses for flexible skin-like electronics. Other researchers have profitably explored a variety of materials to provide the critical semiconductor components for such systems, he noted, but his group has been most successful using rigid silicon electronics in forms that are more mechanically flexible and biocompatible.

Going beyond laboratory demonstrations, Rogers described several ongoing biomedical collaborations, including “more than 20 clinical studies” currently underway. One example aims to provide feedback to and about stroke patients, whose recovery often stalls once they leave the clinic. Another project created a microfluidic lab-on-a-chip that colorimetrically monitors chemical biomarkers in sweat, for example to screen infants for cystic fibrosis. Rogers also showed a battery-powered band-aid-like patch that measures thermal transport to detect blockage of ventricular shunts that relieve cranial pressure in people with hydrocephalus.

In addition to two-dimensional, skin-like electronics, Rogers also described a strategy for moving into the third dimension, because, he said, “biology is more than surfaces.” For a long time, he said, “we thought it might not even be possible, but it turned out to be really easy.” By bonding a released mesh of transistors and ribbons of silicon to a pre-strained elastic substrate, he and his team created structures that buckle out of the plane, rotating and twisting to form “all kinds of geometries” that can include a wide variety of materials.

These structures are not directly suitable for inserting into the brain or other tissues, he said, but could be used as a scaffold for growing cells. He and his colleagues demonstrated this with cells from the rat dorsal root ganglion, growing them in an open structure that incorporates electronic functions.

Other work from Rogers’ group, which he did not talk about, aims to create biodegradable electronics that disappear once it has finished its task, for example in wound healing.

The MRS Medal, endowed by Toh-Ming Lu and Gwo-Ching Wang, is awarded for a specific outstanding recent discovery or advancement that has a major impact on the progress of a materials-related field. John Rogers was recognized “for pioneering contributions to materials for diverse classes of bio-integrated electronic systems.”