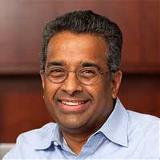 Tuesday morning’s plenary session featured a rousing overview of research into ultralow-energy electric field manipulation of magnetism as the backbone for the next generation of electronics. Ramamoorthy Ramesh, of Lawrence Berkeley National Laboratory and the University of California, Berkeley, delivered his talk as the recipient of the Fred Kavli Distinguished Lectureship in Materials Science.

Ramesh began his lecture by highlighting the significant role of electronic components in a wide array of applications, spanning communications, data storage, sensors, medical devices, and more. Although much of today’s energy consumption concerns are focused on sectors like buildings and transportation, Ramesh showed projections that, without a paradigm shift in microelectronic technology, consumer electronics and data centers could comprise 20% of primary energy consumption by 2030. Averting this path, he asserted, requires electronics with switching energy on the order of an attojoule.

The key to achieving the attojoule goal is to develop new spintronic and multiferroic systems. While traditional technology uses magnetic fields for switching, Ramesh showed the advantages of using thin films in combination with an electric field to control the magnetism. Multiferroics, as a class of materials that have multiple ferroic order parameters, like ferroelectricity combined with some form of ordered magnetism, offer promising properties and wide-ranging flexibility in design.

Bismuth ferrite (BiFeO3) is a prime example of a multiferroic material, popular for its large polarization, high ordering temperatures, and G-type antiferromagnetism. Ramesh’s group has studied the material extensively, observing its domain switching behavior and the coupling of ferroelectric and antiferromagnetic properties using such techniques as photoemission electron microscopy and piezoresponse force microscopy, as well as understanding the alignment of experimental results with theory.

A recent grand challenge Ramesh and his collaborators have been tackling was posed to them by Intel—accomplishing magnetoelectric switching at 100 mV (a level consistent with the 1 aJ energy scale). Most systems achieve switching at approximately 5 V, so Ramesh knew he would need to approach the problem much differently, considering whether the material thickness could be reduced, whether chemical substitution would help, and how domain walls and octahedral tilts would contribute.

Ramesh detailed approaches he and his collaborators at Intel and elsewhere have taken over the last year to examine these variables. They have gained insight working with a 100-nm bismuth ferrite film and using atomic force microscopy to carve out thinner regions, ultimately discovering that, as thickness is reduced, the coercive field increases. They have also experimented with changing the composition. Most recently, they have reduced their magnetoelectric switching from 5 V to 0.5 V—much closer to the goal of 100 mV.

Ramesh concluded his talk by summarizing his accomplishments and listing many unanswered questions that remain, including how to reduce spontaneous polarization, the roles of interfaces and phonons, and whether antiferroelectric phases would yield insight.

Ramesh also gratefully acknowledged the contributions of his collaborators, the critical support of the Kavli Foundation, and the many Materials Research Society staff with whom he has worked.

The Kavli Foundation is dedicated to advancing science for the benefit of humanity, promoting public understanding of scientific research, and supporting scientists and their work.