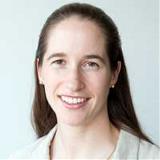 Wood’s first example explored the optical and electronic properties of quantum dots, which are deployed in displays and other applications. These colloidal nanocrystals consist of inorganic cores of about 1000 atoms decorated with a complex shell of organic or inorganic entities. “These are far from the ideal systems that we understand well,” she observed.

In the past 15 years, Wood said, researchers have observed puzzling properties of quantum dots, such as those based on lead sulfide. They have extremely wide photoluminescence bandwidths, extremely fast carrier cooling, and nonradiative recombination rates much faster than observed in corresponding bulk materials.

Wood and her colleagues found that “coupling between nuclear dynamics and electronic states explains some of these phenomena.” In particular, large-energy electronic transitions require participation from many phonons, which is usually slow. However, using inelastic neutron scattering and inelastic x-ray scattering, Wood found that the nanoparticles have a high density of very low-energy phonons that are not observed in the bulk. Approximate analyses show that near room temperature, where all of these modes are excited, multiphonon relaxation processes can be more efficient than processes involving only a few phonons.

Ab initio molecular dynamics simulations indicated that the extra low-frequency modes are associated with the surface regions. Terminating the nanoparticle surfaces with halides instead of sulfur was predicted to decrease the thermal vibrations and also push the electron states deeper into the particle where they couple more weakly to the surface modes. Indeed, experiments showed that such modifications decreased the thermal broadening by 30% and also decreased the nonradiative decay rates. The results confirm that “we should pay more attention to the surfaces of materials,” Wood said.

For her second example, Wood turned to lithium-ion batteries (which were also discussed by Chueh). By acquiring thousands of x-ray images as a sample is successively rotated by a fraction of a degree, she said, tomographic reconstruction algorithms allow researchers to form an “accurate 3D picture of the microstructure.” This structure can be used for further simulations and analysis, and since 2013 Wood and others have been making much of their structural data publicly available as part of The Battery Microstructure Project.

One key parameter characterizing these structures is the tortuosity of the channel that the ions must traverse, which in turn affects the charging and discharging speed as well as, indirectly, the degradation characteristics of the electrode. Since the 1930s researchers have recognized that the particle shape should affect the tortuosity, and Wood and her colleagues were able to quantitively confirm key features of the effective medium model that relates porosity and tortuosity.

Unfortunately, the flakelike shape of naturally occurring graphite tends to align with the current collector to block the flow, so commercial electrodes often use an inefficient rounding process to reduce the tortuosity. Wood has helped found a company to sell manufacturing equipment for aligning naturally flaky graphite perpendicular to the electrodes, actually improving the tortuosity compared to spheres.

X-ray tomography can also be used to image microstructure changes as a battery operates, although it is challenging to see low-molecular weight materials like graphite and lithium. Wood described other strategies for addressing this challenge. She also demonstrated the formation of images directly from x-rays that reveal structural features on very small length scales.

This award was “for innovative work in visualizing, quantifying and explaining transport processes in material and devices.”