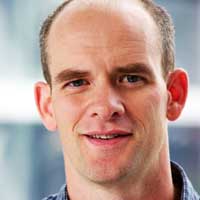 In his talk about the work that led to his Mid-Career Researcher Award, David Mooney of Harvard University described “mechanoregeneration: the idea of mechanical signals controlling the regeneration of tissues and organs in the body.” In addition to fundamental experiments, he showed how these insights are leading to therapeutic devices.

There is growing recognition that cells respond not only to chemical signals but to mechanical cues. These can be either responses of the surrounding materials to forces the cells generate or externally imposed forces. “Materials can be used to control these mechanical signals,” Mooney said.

Mooney’s team has exploited three-dimensional (3D) alginate hydrogels, which are block-copolymer polysaccharides. Crosslinking occurs between one type of block, but not the other, letting the researchers tune the stiffness to see its effect on stem-cell proliferation, migration, and differentiation. Unlike other systems, “the architecture and the macromolecular transport in these gels does not change as we vary the extent of crosslinking,” Mooney stressed. In addition, cells do not adhere to the underlying gel backbone, but only to small synthetic peptides that the researchers covalently attach.

Experiments “demonstrated unequivocally in 3D that we could control the fate of these cells simply by controlling the stiffness of the gel in which the cells were encapsulated,” Mooney said. For example, mesenchymal stem cells differentiated into fat cells in a soft matrix, but into bone-forming cells in a stiffer matrix.

Beyond the static stiffness, Mooney showed that “fundamental elements of cell biology were dramatically altered by the stress relaxation or viscoelasticity of these hydrogels.” Modifications of this relaxation by changing molecular weight and introducing PEG spacers changed the speed of bone regrowth, and modified the ability of the cells to remodel their matrix.

Clinical application of stem cells today, however, is dominated by IV infusion of individual cells, but almost all of the injected cells are gone within a day. This problem can be addressed by surgically implanting hydrogels, but Mooney illustrated a successful alternative in which the cells are individually embedded in hydrogel using droplet microfluidics. This results in better cell survival, and lets researchers use, for single cells, the gel-modification tricks developed for populations in culture.

Cells and tissue are sensitive not only to mechanical response to forces they generate, but to applied forces, Mooney illustrated for muscle tissue. This insight led to a project, spearheaded by Ellen Roche (now at the Massachusetts Institute of Technology) to develop pneumatically actuated soft-robotic devices to assist heart function and regeneration.

The envisioned device combines two capabilities. First, a mechanical sleeve around the heart provides extra pumping assistance without directly contacting the blood. The team showed that this device significantly enhanced cardiac output in pigs. Second, therapies can be locally provided without additional surgery. This capability is especially important for cellular therapies, Mooney said, where single applications are often insufficient for regeneration.

In his final topic, Mooney described a key requirement for applying forces to tissues, which is adhesion to wet and dynamic tissues. Mooney, former colleague Jeong-Yun Sun, and their collaborators combined the ionically crosslinked polysaccharide network with a covalently crosslinked protein network. The hydrogel “crosslinks can dissipate energy, but the bonds are pretty weak,” Mooney noted. The covalent crosslinks are stronger, but the materials are brittle. The combination provides “an unprecedented level of toughness.” Combining this material with chemistry to bridge the underlying tissue and the hydrogel resulted in tough adhesives that “dramatically outperform anything that has been previously described,” including superglue, Mooney said.

The Mid-Career Researcher Award recognizes exceptional achievements in materials research made by mid-career professionals. The Mid-Career Researcher Award is made possible through an endowment established by MilliporeSigma (Sigma-Aldrich Materials Science). This year’s award was given “for pioneering contributions to the field of biomaterials, especially in the incorporation of biological design principles into materials and the use of biomaterials in mechanobiology, tissue engineering and therapeutics.”