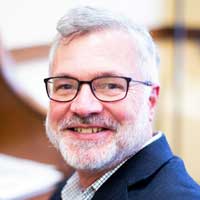 The Innovation in Materials Characterization Award honors an outstanding advance in materials characterization that notably increases knowledge of the structure; composition; in situ behavior under outside stimulus; electronic, mechanical, or chemical behavior; or other characterization feature of materials. David G. Cahill of the University of Illinois at Urbana-Champaign received the honor “for developing transformative methods for characterizing the thermal transport properties of materials and their interfaces using time-domain thermoreflectance (TDTR) and related approaches.” His Wednesday Symposium X talk highlighted the operating principles of the method and covered his group’s accomplishments in advancing the technique into a nearly universal, high-throughput tool for measuring thermal properties of materials.

The TDTR technique uses an ultrafast titanium-sapphire laser oscillator to produce very short (200 fs), high-repetition-rate (80 MHz) pulses of light. The pulses are split into two paths: a pump path, which injects heat into the sample, and a probe path, which measures some aspect of the sample, reporting back its temperature. Thermal transport properties of materials can be extracted by analyzing the temperature evolution, both as a function of the delay time between the arrival of the pump and the probe, and as a function of the frequency at which the pump beam is modulated. In addition, the setup enables picosecond acoustics, which can provide a measurement of thin-film thickness and interface quality.

Cahill explained how his group has developed TDTR to measure the thermal conductivity of almost any material with a smooth surface, including small crystals, and it can be performed with high throughput and in real time. He went into detail on three particular examples.

Cahill next described a high-throughput technique for studying the thermal conductivity dependence of a wide variety of polymer thin films on their molecular bonding and molecular structure. By combining measurements at different frequencies, Cahill’s group is able to extract both the thermal conductivity and heat capacity of the films, and to probe a wide array of materials structures to predict and identify materials compositions and structures that may provide desired properties. This approach has allowed them to search for ultralow-conductivity materials, mapping out the thermal properties of a large number of polymers and cage-structured molecules like fullerene derivatives.

Cahill concluded with a final application, discussing the utility of using TDTR to make measurements in real time, in situ, or under operando conditions to follow the evolution of a material’s behavior. The example he cited was measuring the changes in thermal conductivity of liquid crystal networks in real time in response to changing temperature or external fields.

MRS acknowledges the generosity of Professors Gwo-Ching Wang and Toh-Ming Lu for endowing this award.