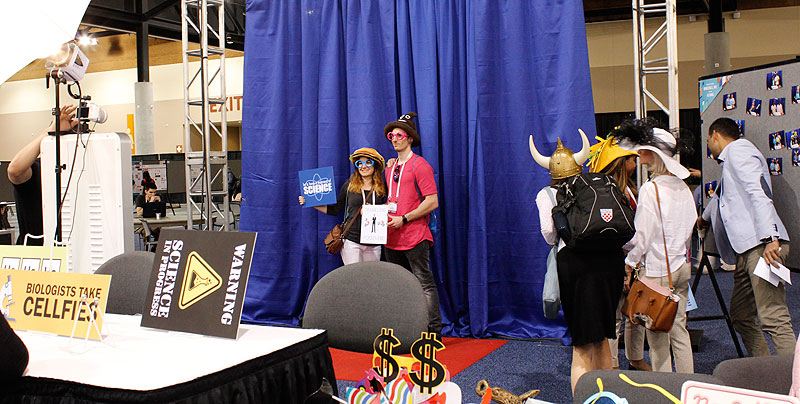 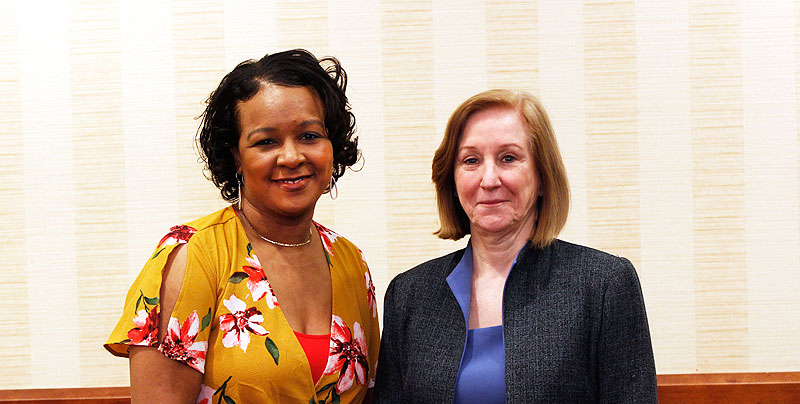 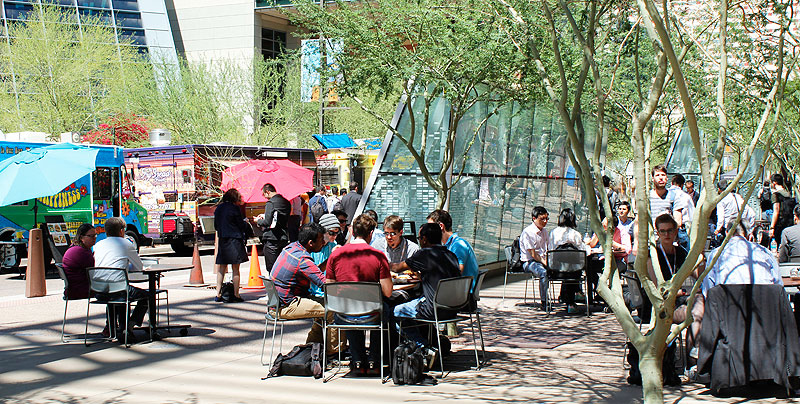 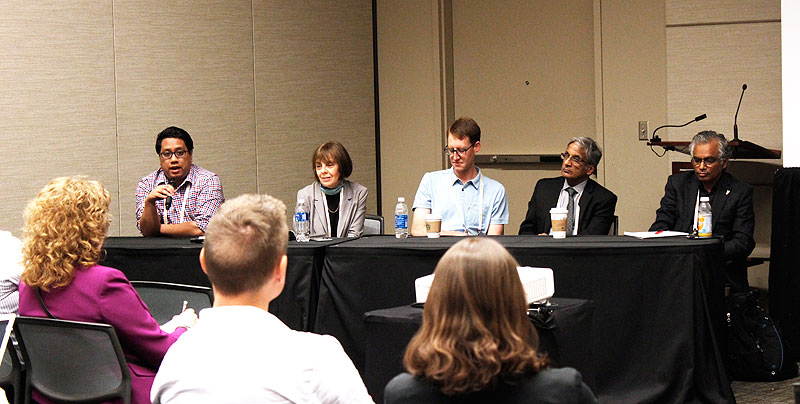 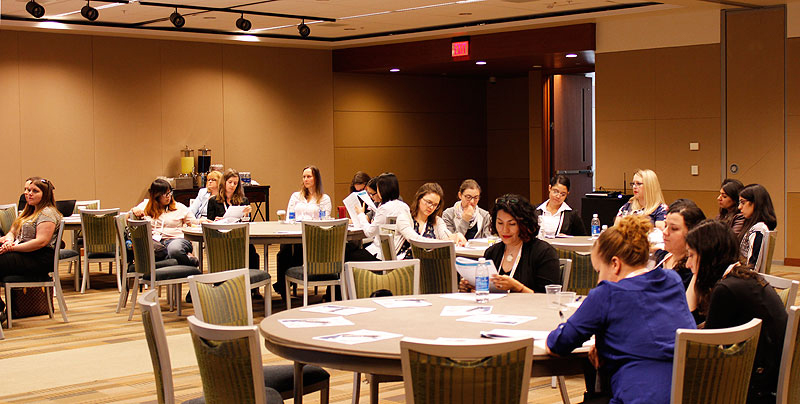 The 2018 MRS Spring Meeting & Exhibit came to a successful conclusion on Friday, April 6, with over 4,000 attendees. Our congratulations go to the Meeting Chairs Edward Botchwey, Catherine Dubourdieu, Quanxi Jia, Shane Kennett, and Cheolmin Park for putting together an excellent technical program along with various special events. MRS would also like to thank all the Symposium Organizers, Session Chairs, and Symposium Assistants for their part in the success of this meeting. We also thank our Sponsors and Exhibitors.

Thank you for subscribing to the Meeting Scene e-mails from the 2018 MRS Spring Meeting & Exhibit. We hope you enjoyed reading them. We welcome your comments and feedback.

Highlights of the Friday morning session

Sometimes science needs to take risks, motivated by pure discovery rather than by the promise of technological applications. The National Science Foundation is one of the most prominent US government organizations that provides funding for such risks. The Friday morning session on “Enabling Quantum Leap—Braiding and Fusing Majoranas,” researchers presented some of their results studying Majorana modes. Eric Rowell from Texas A&M University described his work developing mathematical models of anyons, of which Majorana fermions are a type. Other researchers discussed their difficulties and successes in studying braiding of Majorana fermions, where in space the modes are located, and devices that exploit them. Sergey Frolov of the University of Pittsburgh concluded the session, and remarked that braiding is a difficult experiment, and all current proposed schemes are “crazy.” This work lies at the intersection of disparate fields—materials science, mathematics, physics—and it will take everyone working together to study it effectively.

Making the Most of an MRS Meeting

So the MRS meeting is now over, and we're all back home, but that means it's time to start planning ahead for your next one. As students, there's a lot for us to see and do. Here's some tips to consider when you go to your next MRS meeting.

Reducing the impact of hospital acquired infections (HAIs) represents a huge challenge for the healthcare sector due to the increasing antimicrobial resistance developed by bacterial populations in hospital environments, costing billions and affecting patients and medical personnel. This problem has been identified to be a consequence of excessive and sometimes unnecessary use of antibiotics. Luckily, innovative efforts to address this issue seem to become increasingly feasible from the antibacterial activity of quantum dots (QD) when exposed to light. Ethel Koranteng from University College London shared their efforts to develop antibiotic-free disinfecting agents based on the synergistic effect of newly available non-toxic cadmium-free QD and crystal violet. As Koranteng mentioned in her talk, this combination enables the use of a wider range of the visible-light spectrum to maximize the antibacterial activity, resulting in efficacies of 99.99% and 99.97% in killing laboratory strains of Escherichia coli and methicillin-resistant Staphylococcus aureus (MRSA), respectively.

During this MRS spring 2018, MRS gave me the opportunity not only to attend the topic of my interest like perovskite solar cells, I also tried this year to open my mind and attend some other talks outside my "comfort zone".

For that reason I attended the session of energy like EP04: Advanced Materials for Carbon Capture and Other Important Gas Separations (EP04.01 and EP04.02); it went well; the titles of these talks were: novel devices for the morning session and transistors reliability for the afternoon session. After that I moved on Wednesday into topics related with my material (perovskite) but now for tandem solar applications, and I attended the EN08.06: Tandem Solar Cell Integration; it went really well, due to I obtained more knowledge about it. One talk that caught more my attention was the EN08.06.04: A third option for integrating hybrid tandem solar cells-Three terminal devices, given by Emily Warren from the NREL, Golden Colorado, United States. I never had the opportunity to read about tandem solar cells with 3 contacts, so I learned a lot in here; she  mainly discuss the design and operating principles of three-terminal (3T) tandem cells fabricated by combining a III-V (GaInP or GaAs) top-cell with a 3T Si bottom cell. Also she showed some simulations done to prove that this 3 terminal will provide an efficient mechanism to capture the solar spectrum without the need to current match sub-cells (as in monolithic 2-terminal tandem) or fabricate complicated metal grids/interconnects between cells (as in 4T stacked tandem). Very interesting!

Then I had a great opportunity given by Jiajia Lin, I could not miss it. She invited me to her talk SM05.01.04 : In Vitro Degradation and Characterization of Hydroxyapatite Coated Magnesium for Implant Application from the University of California, Riverside, Riverside, California, United States. She showed the degradation property of Hydroxyapatite (HA), which I learned it was a naturally occurring calcium-containing mineral that is enriched with magnesium, carbonate acid, phosphate, and other trace elements and it was coated Mg prepared by IonTiteTM, and it was tested in in revised simulated body fluid (rSBF) for six weeks. And with the studies she presented they found out that the HA coated Mg substrates are promising materials as bioresorabable implants for orthopedic and craniofacial applications, and confirmed the optimal IonTiteTM process conditions that could produce HA coatings on Mg with superior degradation performance. Then I also learned that bioresorbable implants are being widely used for fracture fixation in orthopaedic surgery and the market is expanding rapidly worldwide. I hope I can see Jiajia's work in the market pretty soon.

I still have a great experience going on in my mind, why on my mind?  Well, due to now I want to know more about other materials too and probably move my research to other applications as well. I hope you had that feeling too, and you found the MRS very productive for your research and your future work.

Thank you MRS 2018 and the speakers mentioned!

What is the next generation of load-bearing biomedical implants?

Dr. Huinan Liu, a professor from the University of California, Riverside, gave a talk on the next generation of load-bearing biomedical implants. Her research focuses on developing biodegradable and bioresorbable metal as well as composites materials for biomedical applications. Mg is considered because it is biodegradable and biocompatible, in which the Mg implants disappear after new tissue regeneration. The degradation rate is the key challenge for the implantable Mg. Generally, slow release of the degradation products of Mg (such as H2, Mg2+, OH-) can allow time for diffusion and metabolism. However in practical use, the fast degradation of Mg restricts its usage as implant material because the increase of local pH and release of H2 affect the cell proliferation and new tissue regeneration. In this talk, Dr. Huinan promoted several solutions such as alloying and surface treatment (ceramic coating, polymer/polymer composite coating)  of the bare Mg. Moreover, in clinical use, most of the implants can easily be contaminated by bacterial and biofilm is easily grow on top of the implant which lead to fixation failure. In this case, antimicrobial coatings with anti-corrosion properties are also considered in her research.

David J. Mooney,  a Professor of Bioengineering at the Harvard School of Engineering and Applied Sciences as well as a core faculty member at the Wyss Institute for Biologically Inspired Engineering at Harvard University, was invited as an honored speaker in the MRS Symposium X meeting. Mooney is a member of both the National Academy of Engineering and the National Academy of Medicine. The Mooney lab focuses on designing biomaterials that affect specific cells functions and making therapies more effective and practical through study of the mechanism of the chemical and mechanical signal that were sensed by cells. His research now focuses on therapeutic angiogenesis, regeneration of musculoskeletal tissues and cancer therapies. In the meeting, he introduced the influence of stress relaxation of hydrogel on cells and demonstrated that faster relaxation of gels promote cell spreading and enhance osteogenesis and new bone formation. Moreover, he put forward that ferrogel with magnetic stimulation can promote new tissue regeneration because active mechanical stimulation share a similar mechanism.

Who Influenced Your Career?

MRS TV spoke to 2018 MRS Spring Meeting attendees and asked them to talk about their mentors.