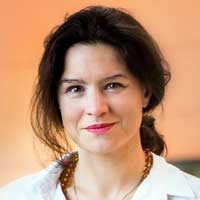 The Wonderful World of Melanins

Clara Santato of Polytechnique Montréal received the MRS Communications award for her article “Natural Melanin Pigments and Their Interfaces with Metal Ions and Oxides: Emerging Concepts and Technologies” (MRS Communications, Vol. 7, Issue 2). In her Tuesday lecture she gave a wide-ranging overview of the potential of melanin as an optoelectronic and energy storage material, and also as a prototype for rigorous exploration of natural materials for potential applications in environmentally friendly electronics.

Santato stressed the importance of distinguishing many distinct attributes that affect “greenness.” Biodegradability, for example, is only one aspect of compostability, which must begin with mechanical disintegration and end with acceptably low ecotoxicity of the degradation products. “Biodegradation is just one of these steps.”

Santato and her colleagues, as well as other research groups, have focused on the natural pigment family of melanins, specifically the ubiquitous black-brown eumelanin. “Melanin is a macromolecule that results from the combination—I don’t want to use the word polymerization—of two building blocks,” 5,6 -dihydroxyindole (DHI) and 5,6 -dihydroxyindole-2-carboxylic acid (DHICA).

These units can undergo successive redox reactions to an intermediate semiquinone stage and a fully oxidized quinone form, which raises the potential for storing electrochemical energy. Santato and her team exploited this property to form supercapacitors from melanin-based films on carbon paper with capacity of 170 F/g. They also made a transistor from the material. In the future, she suggested that this storage might be combined in a solar cell structure to make an “organic green solar battery, where you integrate the energy conversion and the energy storage function within the same device.”

The team also explored forming thin-films based on DHI and DHICA to study both the chemical properties and the fundamental features of electronic and ionic transport. For example, the non-carboxylated DHI appears to be more amenable to effective π- π stacking of the molecules, analogous to other conjugate polymers, and experiments confirmed that this material can be much more electrically conductive than the DHICA form or natural melanin.

Evaluating the properties of natural melanin remains challenging because of its disordered structure. Indeed, there are still competing hypotheses about whether its broad optical absorption results more from geometric or chemical heterogeneity. This heterogeneity also affects the electrochemical behavior, which shows no evidence for sharply defined redox potentials. “The complexity cannot be denied, sometimes,” Santato said.

These complexities can be opportunities as well as challenges. For example, Santato showed that the electrical conduction is strongly affected by humidity in the environment, but this sensitivity also suggests novel uses, for example sensors. “Don’t think about melanin just as a new electronic material, but as a mixed transport material—ionic and electronic—where you can have irreversible processes, really chemical transformation at the interface,” she said.