The dawn and promise of quantum materials 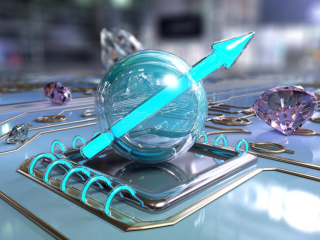 The field of quantum materials has seen an exponential rise in research interest over the past two decades. The burst of activity has stemmed from an array of observations made in a certain class of materials that fail to be explained from a purely classical physics standpoint. Consider, for example, the interface between two rightly chosen insulators, such as lanthanum aluminate and strontium titanate. While classical physics would predict a perfectly insulating interface mirroring the bulk, experiments reveal a highly conducting region. It turns out that such oxide interfaces form strongly correlated electron systems resulting in a wide variety of emergent phenomena. A plethora of similar mind-bending observations can be explained by invoking the underlying notion of symmetry breaking at such interfaces, an idea central to quantum materials. Symmetry breaking, in modest terms, is a fluctuation that forces a physical system to leave its symmetric state and become asymmetric. Foreseeable applications of this materials class are wide-ranging and, in principle, revolutionary: Mott insulators, high-temperature superconductivity, quantum computing and quantum communication, besides many others.

Some of these findings have already transformed society. Giant magnetoresistance, for instance, is used for data storage currently and was aptly recognized by a Nobel Prize in Physics in 2007. Graphene, a wonder quantum material, as well as a whole slew of two-dimensional materials discovered and developed subsequently, define the bleeding edge of materials science, promising applications in flexible and stretchable electronics and the internet-of-things (IoT).

Perhaps the most groundbreaking application that quantum materials promise is quantum computing. The basis of quantum computing is a “qubit,” the quantum analogue of a classical “bit.” Quantum logic is the underlying math of a quantum computer, much like Boolean logic which defines the classical computer of today. However, quantum logic is different in that a superposition of the two accessible qubit states can exist simultaneously, and multiple qubits can be entangled—both of which enable math to be encoded in a completely different manner compared to a classical “bit.” Multiple materials systems have been used as demonstration qubits; one example is the quantum mechanical spin of a crystal defect, such as a nitrogen-vacancy complex in diamond, to initialize, manipulate, store, and read a pair of physical quantum mechanical states as data. A crucial thrust and a challenge in the race to the quantum computer is the realization of a long-lived coherent quantum system, where the quantum states remain interconnected, unperturbed and stable for an extended time. In order to find applications in computing, quantum systems need to satisfy the diVincenzo criteria, one of which requires the qubit to be protected from the surrounding environment to reduce decoherence, or the loss of coherence, that leads to loss of quantum information. Here, quantum materials hold potential.

“Quantum information theory devices use the discreteness for improved information processing or sensing. Topological effects in materials make use of an inherent stability provided by some extended symmetry property of a material. The canonical example of a topological distinction is that a donut is topologically distinct from a sphere because it has a hole. If you can find ways to encode information or otherwise design materials that make use of this topological protection you could potentially discover valuable or novel applications,” says Richard P. Muller, an expert in quantum materials from Sandia National Laboratories, and a co-organizer of Symposium LN01 in the upcoming 2018 MRS Spring Meeting & Exhibit in Phoenix, which is focused on the role of materials science in quantum information technologies. Muller says that beyond quantum sensing or information processing, “quantum materials could provide spintronic devices for more standard classical computing devices. They have been proposed for improved thermoelectric properties, and for improved microwave circulators for low temperature electronics.”

Christopher J. Richardson, based at the University of Maryland, who is a co-organizer of Symposium LN01, strongly feels that materials have the potential to revolutionize quantum computing in the near future. “We, as materials scientists, are focused on both conventional materials and quantum materials that can impact quantum information devices. A fundamental challenge is to be able to tune the properties of these materials to enhance information stored in quantum states. There is, therefore, a very tight coupling between materials synthesis and the technological application,” Richardson says.

In the words of John Preskill, a theoretical physicist at the California Institute of Technology, for some applications, quantum computers may lead to “quantum supremacy”—enabling operations, processing, and calculations that are currently beyond the limits of the most powerful of today’s computers. Researchers are only beginning to unlock the grand potential that these materials have to offer.

I hope in his punchline near the end of the 2nd paragraph,
"... define the bleeding edge of materials science ..."
the author really meant 'leading' not 'bleeding'.
But, this is the pound of flesh that automatic spellchecking
soft wares extract from us.
Arguably, the ultimate success of ‘Quantum materials’ will be
when they would bring forth unpredicted advantages over current
materials that are far in excess of putative suitability in non-Turing-von Neumann computation.
Such an expectation, is also consistent with the counter intuitive nature of the quanta.
The allure of ‘Quantum materials’ goes far beyond computation.