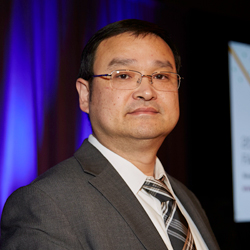 The ability to control structure on the nanometer scale has let researchers create metamaterials with dramatically different properties than their constituent materials. In optics, these properties include structurally determined color, negative refractive index, and cloaking, for example. “Exploring these areas has been extremely fruitful,” said Xiaobo Yin of the University of Colorado, recipient of the Kavli Foundation Early Career Lectureship in Materials Science.

But he noted that many problems critical to society, such as energy, food, and water, require solutions on very large scales, which are not easily achieved with the precise processing techniques that are often used to make nanostructures and nanomaterials. “Let’s make manufacture scalable,” Yin said, urging materials scientists to “put the constraint of manufacturability into consideration when we design those magical structures.”

Yin illustrated this philosophy with research from his group on optical materials for space cooling, which passively removes heat by radiation. The opportunity arises because the solar energy that heats earth is primarily in the wavelength range 0.3-3 µm (corresponding to a 6000 K black body), while the energy that reradiates from earth’s 300 K surface is in the mid-infrared (IR) with wavelengths of 3-30 µm. With a material that reflects the former while emitting the latter, Yin said, “we can cool the surface without paying anything such as electricity or water.”

The challenge is that full sunlight carries more than 1000 W/m2, while a room-temperature black body only emits 100 W/m2, so the reflectivity in the visible and near infrared must be nearly perfect. Moreover, the optical properties must be controlled over nearly two orders of magnitude in wavelength. Research from Shanhui Fan’s group at Stanford University revived this idea a few years ago, and achieved the needed properties using 11 layers of precisely deposited material, Yin said. But to cool a house, he noted, requires ten square meters of material to emit a kilowatt, so a more scalable solution is needed.

He described a “poor man’s solution” for radiative cooling, consisting of a mid-IR–absorbing coating over a silver reflector. For the absorbing film, his group has embedded glass microspheres in a polymeric matrix. The IR light couples to the vibrational modes of the silicon dioxide, which makes it a “naturally good emitter,” he said. Moreover, by choosing spheres of the right diameter (about 8 µm) the geometrical resonance (Mie resonance) of the phonon-polariton modes can be broadened across the desired wavelength range from 8 µm to 13 µm. With these spheres, Yin said, “the light is absorbed but the scattering is much reduced.”

Beginning two years ago, Yin converted his laboratory from a clean room setup to something resembling commercial manufacturing for extrusion of polymer sheets and large-scale vacuum metallization. The resulting sheets, with meter-scale dimensions, have less than 4% absorption in the visible and near-IR, and 94% absorption (corresponding to high emissivity) in the 10-µm range, as designed. This film showed cooling of 7.5°C below ambient in sunlight. Tests in October in Arizona showed an average cooling power of more than 100 W/m2 over several days. Yin expressed hope that these scalable nanomaterials could be used, for example, for auxiliary cooling in power plants as well as household cooling in hot but resource-poor regions of the world.