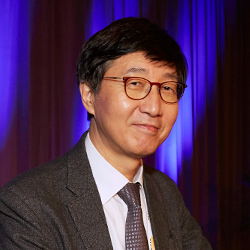 In his Symposium X presentation, Nam-Gyu Park of Sungkyunkwan University placed perovskite photovoltaics squarely in the category of a disruptive technology, which he defined as one that replaces an existing technology. He cited the example of Kodak, which filed for bankruptcy in 2012 after dominating the analog film business for much of its 131 years of existence, owing to its unwillingness to pursue digital technology after its 1975 invention of the digital camera. Drawing on a 1962 theory of the diffusion of innovation, Park showed that there is a period of discontinuity marked by a transition state during which the old technology matures and then declines while the new one is in an innovation stage. In the auto industry, we are seeing the hybrid gasoline/battery vehicle as a transition to the electric vehicle, and in renewable energy, where the solar disruption has already begun, the replacement of silicon by perovskite photovoltaics, owing to superb performance and very low cost, will be marked by tandem silicon/perovskite solar cells.

Reviewing perovskite basics, Park first recalled the structure of an ABX3 perovskite (an isostructure of the orthorhombic MgTiO3 mineral found in the Earth’s lower mantle) then moved on to the organic-lead halide perovskites, APbI3, where in this talk the A is usually CH3NH3 (methylammonium or MA). Park cautioned that nanocrystals of these materials are vastly different from conventional semiconductor nanocrystals, such as CdSe and InP, in part because of the highly delocalized iodide cation. One difference is the defect tolerance of lead halide perovskites that is due to the bandgap being formed from two sets of antibonding orbitals, as opposed to bonding and antibonding states in conventional semiconductors, and therefore resulting in shallow, less damaging rather than damaging mid-gap states for defects.

From here, Park looked at recent progress in perovskite solar cell research. In brief, among these were controlling the crystal size for high efficiency, use of an adduct synthesis approach (the addition of two or more distinct molecules resulting in a single reaction product containing all the atoms of all the components) for reproducibility, passivation of grain boundaries for longer carrier lifetime, substitution of formamidinium [HC(NH2)2] for methylammonium for high power conversion efficiency and photostability, the addition of a small amount of cesium to the formamidinium for resistance to humidity and reduced hysteresis in the I-V curve, and the synthesis of nanowires with improved lateral conductivity and carrier lifetime. Park also described a method for reduction in hysteresis and improving moisture stability by means of interfacial nanoengineering using a two-dimensional perovskite of the form A2PbI4, where A is phenethylamine or PEA, at the boundaries between the three-dimensional crystals.

Taking a wider view of possible perovskite applications, Park reported on efforts in his group to make LEDs, based on a nonstoichiometric adduct method and solvent-vacuum drying process. The researchers achieved an emission quantum efficiency of 8.2%. Park finished with an even bigger leap to x-ray imaging of humans, where repeated medical x-ray exposure can accumulate over time to reach cancer-causing doses. A direct imaging camera based on multicrystalline perovskite crystals was constructed and in tests achieved clear images at lower doses than existing amorphous selenium arrays.

Park summarized his talk with these points: