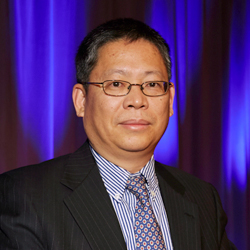 Towards Predictable and Deterministic Synthesis of Colloidal Metal Nanocrystals

On Thursday evening, Younan Xia of the Georgia Institute of Technology was honored with the MRS Medal for “seminal contributions to shape-controlled synthesis of metal nanocrystals with major impact on catalysis, plasmonics and biomedicine.”

Xia’s group has invented myriad nanomaterials for applications in catalysis, plasmonics, electronics, display, energy, and medicine. His silver nanowire technology is an integral component of flexible, transparent, and conductive films used in touchscreen displays and flexible electronics. He has received many prestigious awards, including the ACS National Award in the Chemistry of Materials, NIH Director’s Pioneer Award, and the NSF CAREER Award.

For his medal talk, Xia discussed precious metals; in particular, platinum and gold. The scarcity, cost, and complex processing of precious metals, he suggested, means scientists need to develop a way to use precious metals in a sustainable fashion.

Using the structure of graphene as inspiration, other researchers have mimicked the unique features of graphene in metal nanosheets. Xia’s team has built upon this to develop platinum nanocages for catalysis and gold nanocages that can be used for medical imaging.

“We believe this will be the future direction if you really want to scale up for large-volume production of nanomaterials,” Xia said. “Hopefully in the future we can have hollow and porous nanocrystals that can help us to cut the cost and achieve sustainable use of all the precious metals.”

Xia also gave a Symposium X talk on Tuesday afternoon about the synthesis of colloidal metal nanocrystals. In the early 2000s, Xia said, nanomaterials had a great deal of polydispersity—no two particles had the same size, or shape, or structure. To be used successfully in any applications, the size and the morphology of nanostructures must be controlled. Now, after nearly two decades of studying the nucleation and growth of colloidal nanocrystals, Xia’s research team can reliably synthesize a wide range of metal nanocrystals with controlled nucleation and growth.

In particular, Xia noted, symmetry reduction is always involved in nanocrystal synthesis and can be used to control the final morphology of nanocrystals. By studying nanocrystal seeds in solution, and then introducing a precursor that can be reduced at a certain rate constant, the members of his research team are investigating if they can predict if the symmetry is going to be broken, and how it will be broken.

“Seeded growth could actually become a very powerful pathway for new and diversified nanocrystals,” Xia said. “If you take the seed and if you can control the growth pattern, basically symmetric and asymmetric, even for asymmetric, you have different possibilities, and eventually, you can make nanocrystals with very, very diversified morphologies, and hopefully, they can also have different functionalities to see the different applications.”

The MRS Medal, endowed by Toh-Ming Lu and Gwo-Ching Wang, is awarded for a specific outstanding recent discovery or advancement that has a major impact on the progress of a materials-related field. Symposium X lectures are aimed at a broad audience to provide meeting attendees with an overview of leading-edge topics.