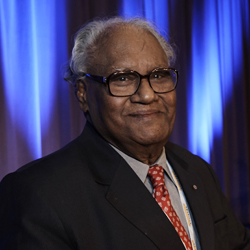 60 Years of Research in Materials Chemistry

On Wednesday evening, C.N.R. Rao of the Jawaharlal Nehru Centre for Advanced Scientific Research, India gave the Von Hippel Award lecture. Rao, a prolific scientist with more than 1,500 publications, has received dozens of international honors, including honorary fellowship in the Royal Society of Chemistry and the Bharat Ratna, the highest civilian honor in India.

Rao was recognized for his “immense interdisciplinary contribution to the development of novel functional materials, including magnetic and electronic properties of transition metal oxides, nanomaterials such as fullerenes, graphene and two-dimensional inorganic solids, superconductivity, and colossal magnetoresistance in rare earth cuprates and magnates.”

His talk outlined a journey through more than six decades of research in materials chemistry. Starting his research career in the 1950s, he decided to focus on a topic that did not require expensive equipment that would have been difficult to obtain in India at the time. With a “broken down” x-ray machine as his first measurement tool, he began to explore the field of solid-state chemistry.

In the 1960s, he focused on the stoichiometry of compounds, revealing fundamental knowledge of phase transitions in rare earth oxides and metal oxides. Rao noted “people would laugh” when he said metal oxides (such as ReO3) were as conductive as copper.

Around this time, the metal-to-insulator transition was discovered, which opened up new avenues of research in studying perovskites and high-temperature superconductivity in the 1970s. Superconductivity, Rao noted, allow chemistry to become a part of “mainstream” materials research in the late 1980s and 1990s. In the next few decades, Rao expanded his repertoire to magnetoelectrics, open framework structures, hybrid materials and nanomaterials (in particular, the discovery of nanomagnetism). He also stressed the role of theory and simulation in chemical design.

Most recently, Rao has been investigating boron-carbon nitride and nickel-based structures to replace platinum for water-splitting. In his concluding remarks, Rao commented on the “tremendous vibrancy” of materials chemistry and how the research has been “a wonderful savior and a great companion in my life.”

The Von Hippel Award, the Materials Research Society's highest honor, recognizes those qualities most prized by materials scientists and engineers—brilliance and originality of intellect, combined with vision that transcends the boundaries of conventional scientific disciplines.