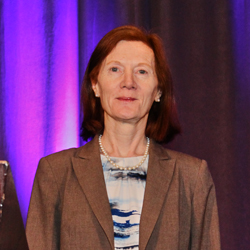 In her Symposium X talk on Monday, Margaret Murnane of the University of Colorado Boulder described methods to create coherent sources with extremely short wavelengths, with excellent spectral, temporal, and polarization control. “Thirty years ago,” she said, “we never thought that we could achieve the same kind of control—and perhaps better control—over light in extreme UV and soft x-ray region as we could in the visible region of the spectrum.”

High-harmonic–generation (HHG) takes advantage of the extremely nonlinear response when a train of femtosecond-long laser pulses is simply focused into a gas. Each pulse creates a rapid ionization and recombination event, and the light emitted from the periodic train of sharp spikes corresponds to thousands of harmonics of the original pulses, extending deep into the ultraviolet and soft x-ray regions. Over the past 15 years, Murnane said, researchers have learned how to ensure that these x-ray emissions constructively interfere to form a tight, coherent beam. “It’s harder than you might think,” she said, requiring synchronization with attosecond time resolution and sub-angstrom spatial resolution, but the conditions to make it work—with help from microscopic physics—are now understood. Surprisingly, the resulting pulses are “shorter than any physical process,” Murnane said.

These techniques can be implemented for hundreds of thousands of dollars in individual laboratories, and are beginning to attract the interest of commercial providers. Murnane said that their capabilities complement those of accelerator-based sources, which are more powerful and extend to higher energies but are also vastly more expensive. Although the conversion efficiency of HHG is low, “because it’s in the lab,” she said, “we can try other things,” so that even demonstration experiments can often be refined to explore unexpected phenomena, of which she gave several examples. “We learned something new in every one of these experiments,” Murnane said.

The earliest applications of x-rays were in imaging, but the resolution attainable with traditional incoherent sources has always been limited by the quality of the optical components, with resolution no better than 10 times the diffraction limit. Over the same period that HHG sources were improving, researchers were perfecting new imaging techniques, notably coherent diffraction imaging (CDI), which had first been proposed in 1952. With these techniques, “we don’t need a lens,” but instead use the scattering pattern with an iterative phase retrieval process to recover the image of a sample.

Things got even better in 2016, when researchers applied a method called ptychography, which exploits the redundancy in a series of overlapping images to determine the phases of the diffracted beams. Scanning the beam across a sample now allows researchers to create x-ray images with sub-wavelength resolution. The phase information can correspond to the sample height, as in standard profilometry, but the soft x-ray beam amplitude also penetrates the sample and provides chemical information. The resulting images compare well with scanning-electron micrographs of the same samples, but with even better contrast.

Murnane also briefly described other experiments that exploit the powerful new techniques, including a method to distinguish electron-electron scattering from screening, and a movie showing the penetration of a short heat pulse into a sample. “It’s quite remarkable what these tabletop lights sources can do,” she said.

Murnane is now director of a multi-university Science and Technology Center sponsored by the National Science Foundation, called STROBE, which aims to exploit these and other techniques for characterization of materials and biological samples.