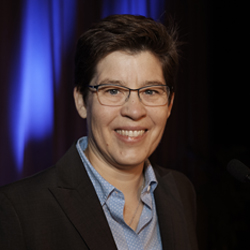 In her Symposium X talk, Jennifer A. Lewis described the 3D-printing technique she calls “direct ink writing.” Lewis and her colleagues pioneered this technique and continue to develop new inks and nozzle designs to extend it to a wide variety of uses, including several recent ones that she discussed in detail.

This technique requires inks that can be injected as a liquid filament, but immediately become solid enough to maintain their form across gaps that are many times larger. One way to achieve this is with a sheer-thinning material that flows easily through a nozzle but becomes stiff when the flow stops after deposition. Lewis also described another versatile strategy, in which ultraviolet light crosslinks the ink to solidify it just after it leaves the nozzle.

Another recurring technique in Lewis’s work is the use of “fugitive” inks, which can be incorporated in a larger structure and later removed. The resulting empty channel can be used to transport fluids in microfluidic or biomedical applications.

In her first examples, Lewis described applications in soft electronics and robotics. For electronics, her team took advantage of standard surface-mount components, but replaced the bulky, stiff printed circuit board with a flexible substrate. Such structures could be used for smart fabrics or medical devices, for example. A key ingredient is a stretchable electrical interconnection, made by adding silver particles to an ink, which was still conductive under 150% strain.

Lewis also displayed a fully soft autonomous (although still primitive) robot called the octobot. Pneumatic actuation of the arms was achieved not with an external gas source but using a platinum catalyst to generate oxygen and water vapor from an onboard hydrogen peroxide fuel supply. The system was made using embedded 3D printing directly inside the molded robot body, which self-heals after the nozzle passes.

Recent work, described at the meeting by group member Ryan Truby, combined sensors of curvature, actuation, and contact to create a soft robotic gripper with the capability of tactile feedback. “For the first time we have the opportunity to close the loop on soft robotics,” Lewis said.

In a second major topic, Lewis described shape-morphing architectures inspired by responsive structures in biology. In their first demonstrations, her team used the same cellulose fibrils found in plants, whose stiffness prevents expansion along the fibril direction, for example when water causes the material to swell. The fibrils naturally align with the flow during printing, so the printing pattern can create controlled anisotropy that is locked in by UV curing. The team demonstrated bending, twisting, and ruffling patterns for different print, and developed a theoretical framework to generate arbitrary curvatures. Because the cellulose structures are very fragile, Lewis’s team has also developed a high-operating-temperature print head and an ink based on a liquid-crystal elastomer that should be more functional.

A fugitive ink formed the channel region (lumen) of the blood vessels, which was then populated with endothelial cells that attach to the channel walls. The researchers perfused a cm-thick vascularized sample printed with human bone marrow mesenchymal stem cells for over 30 days and observed signs of mineralization throughout the sample. With the right medium, “we can create a tissue that is starting to move down an osteogenic lineage,” Lewis concluded.