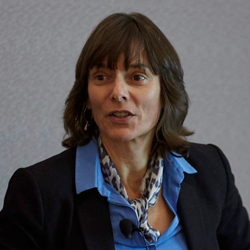 The Mid-Career Researcher Award recognizes exceptional achievements in materials research made by mid-career professionals. Nicola Spaldin of ETH Zürich was scheduled to receive this award at the 2017 MRS Spring Meeting & Exhibit “for creating a new theoretical framework describing multiferroics and for service to the materials community.” However, she was unable to attend the Meeting and graciously agreed to present “Dynamical Multiferroicity” at the 2017 MRS Fall Meeting & Exhibit.

Her award talk drew an overflow crowd to the meeting room where it was presented as part of a symposium on multiferroicity but also attracted several nonspecialists. Accordingly, Spaldin began with a quick mini-tutorial explaining that the interest stemmed from the ability to obtain any two of ferroelasticity, ferroelectricity, and ferromagnetism in one material, which appeals both to those interested in the physics and chemistry of materials properties and to those seeking novel materials with useful applications. For example, in a magnetoelectric material, one can modify the ferroelectric polarization with a magnetic field or modify the magnetization with an electric field. Unfortunately, after teasing us with these possibilities, Nature said, “Wait, not so fast” because materials chemistry that promotes one of these behaviors tends to inhibit the others. For example, partially filled d orbitals are needed for magnetism but empty orbitals are needed for ferroelectricity. One key to combining, say, ferroelectricity and ferromagnetism is to introduce a magnetic ordering that breaks the inversion symmetry of an otherwise centrosymmetric structure. The magnetic ordering itself causes a polarization. Although discovered in the 1970s, it was only when this mechanism was rediscovered in the mid-2000s that interest took off.

For the bulk of the talk, Spaldin assumed a sinusoidal time variation in discussing three phenomena in which she argued that dynamical multiferroicity could be operative. The first of these is a phonon Zeeman effect, which has not been observed. The idea is to use two out-of-phase optical phonons, one in the x direction and one in the y direction, to induce magnetization in a non-magnetic material with cations and anions. Owing to the looping trajectories of the two kinds of ions due to the optical phonons, the result is a dynamical ferromagnet rather than ferromagnet. In the case of a pair of degenerate phonons, there is a static magnetization, and an applied magnetic field would split their frequencies, a Zeeman splitting. Would this effect ever be measurable? Large ionic charge and small masses enhance the effect. Calculations for strontium titanate suggest a splitting of 10-3 in a field of 55 T, which is at the limit of measurability.

The second phenomenon is the resonant excitation of a magnon, something that has been done, but is dynamic multiferroicity involved? The experiment by the group of Andrea Cavalleri involved orthorhombic perovskite erbium ferrite, a material that is magnetic but not polar. They sent a 20-THz pulse along the [110] direction, which excited two optical phonons of unequal frequencies along the a and b directions, and a magnon at 0.75 THz and an oscillation magnetization along the c direction. Simulation with density functional theory resulted in a magnetization as a function of time that corresponds to the magnon in a way consistent with dynamic multiferroicity expressions.

The third example is the excitation of Dzyaloshinskii-Moriya electromagnons in materials that are both magnetic and polar. The effect has been observed in terbium manganite. Once again, application of the dynamic multiferroicity expressions results in behavior like that observed for the particular geometry chosen. Only mentioned briefly in her conclusion, the inverse Faraday effect may also be explained in terms of dynamical multiferroicity.

Concluding, Spaldin asked what the outlook is for the concept of multiferroicity. Does it have a use? While currently excited, she was herself unconvinced about the long term, but noted that it was helpful to include three different phenomena within a single formalism. She also mentioned unit-cell electric motors as a possibility but wondered if they could do anything useful. The jury is out.