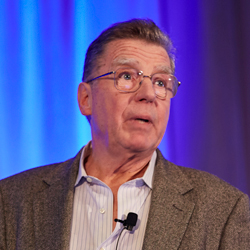 The David Turnbull Lectureship Award recognizes the career contribution of a scientist to fundamental understanding of the science of materials through experimental and/or theoretical research, as exemplified by David Turnbull. Sigurd Wagner of Princeton University is honored “for groundbreaking contributions to the science and technology of thin film photovoltaics, amorphous silicon and flexible large-area electronics.”

After noting some similarities between his career and that of David Turnbull (raised on a farm, studied physical chemistry, and took an industrial position followed by an academic one), Wagner set about reviewing his life as a materials researcher, punctuating it with observations and lessons learned along the way. He put the first and perhaps most important up front: the industrial focus on applications demands interdisciplinary research and working effectively with colleagues in other disciplines requires learning their languages. He also noted that, increasingly, the ease of collaboration and the many available research tools are enabling and encouraging researchers to move back and forth between fairly basic study, exploration, and application of materials. In his review of the journey from exploration to application, he concentrated on four types of materials where he had the opportunity of starting at the beginning and seeing it through to applications.

Diffusion and oxidation in silicon was his first example. Arriving at the old Bell Telephone Laboratories (Bell Labs) in 1970, he joined a group working on a 1-kB memory, perhaps the first “real” integrated circuit. Wagner was assigned to make clean SiO2/Si interfaces with low defect densities. Ten years previously, Bell Labs had made metal oxide semiconductor (MOS) transistors but did not follow up with integrated circuits. It had been assumed that because germanium interfaces were unstable, so also would be silicon interfaces and that low transistor yields would also be problematic for placing many transistors on a chip. It was only when Intel came out with a kilobit memory chip in October 1970 that the lab sprang into action. Later, experts in the field said that the wavelength of the light used for patterning would also be limiting minimum feature sizes. The lesson Wagner learned: Don’t believe it when highly experienced old-timers say it can’t be done. Companies can suffer if they are too conservative about new technology.

Moving to a different division at Bell Labs, Wagner worked as a device maker in a group studying chalcopyrites as a new type of semiconductor. Working with CuInSe2, the group investigated light-emitting diodes (LEDs) and CuInSe2/CdS heterodiode photodetectors for fiber optics communications using GaAs lasers. The quantum efficiency of the photodetectors turned out to be limited by the high reflectivity, so the group shifted to solar cells with anti-reflection coatings that achieved 12% efficiency (now at 20% in commercial thin-film cells). One lesson learned was the power of collaboration when folks from different backgrounds manage to quickly learn to work together. Another lesson was the key role that external factors like national politics can play. Under President Jimmy Carter, the United States was the undisputed leader in solar-cell technology, but 6 months later under new President Ronald Reagan, renewable energy was deemphasized, a serious blow for US solar-cell development, which requires a decades-long commitment, and the United States lost its leadership to Japan and Germany.

Joining Princeton, Wagner took up working with amorphous silicon (a-Si:H) for solar cells. Amorphous silicon contains no structural feature larger than an interatomic length and has dangling bonds with electronic states in the middle of the bandgap. Because silicon is elemental and therefore simple compared to other materials, Wagner reasoned that there would probably be an application that he could help develop in an academic environment, if not solar cells, then thin-film transistors, or something else. It turned out that amorphous silicon has a large thermo-optic coefficient. The Princeton group used this feature to make a-Si:H/SiNx multilayer Fabry-Perot optical resonator integrated with a resistive heater in a microelectromechanical system (MEMS) structure to serve as a narrow-band tunable filter. Combined with an InGaAs detector, this filter can be used as a channel monitor for fiber-optic communication, and in fact it is now commercially available. The lesson learned: Sometimes the applications that work out are quite different from those envisioned when first exploring a material.

Wagner devoted the largest portion of his talk to flexible electronics and large-area sensor arrays. After succeeding first with amorphous silicon thin-film transistors (TFTs) on bendable glass foils and on steel foils, then with TFT circuits, such as a TFT driving an organic LED on a flexed steel foil, Wagner asked if a foldable electronic map was feasible and concluded that foldable organic LED displays can indeed be made and looked forward to conformable-shaped dashboard displays in future automobiles. After bending amorphous silicon came stretching a silicon-based polymer, polydimethysiloxane (PDMS), substrate patterned with a gold conductor. Being mechanically compatible with living tissue, the polymer was seen as suitable for stretchable microelectrode arrays and long-term neural interface implants. Wagner showed how these could serve as a tool for in vitro study of traumatic brain injury in rats and a neural prosthesis for electrical and chemical stimulation, again with rats. He concluded with showing how to make hybrid large-area thin-film sensor arrays based on complementary metal-oxide semiconductor technology work with the goal of showing industry the path to complete functional systems. He concluded that flexible and stretchable electronics is only at its beginning.