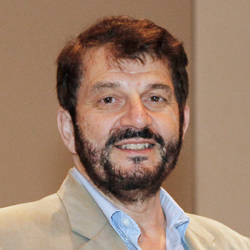 Precise control of fluid handling and mixing using microchannels has become popular, for example for compact “lab on a chip” applications. In his Symposium X talk on Wednesday, David Weitz of Harvard University described a powerful version of microfluidics that exploits individual droplets, with applications in both specialty materials and tools for biotechnology.

“We use drops as a template around which we build new structures and try to create new and functional materials,” Weitz said. Under the right conditions, a steady jet of fluid from a microchannel breaks up into highly uniform droplets. Moreover, this process can be cascaded to controllably form drops within drops (and even within other drops) of chosen composition.

After developing the techniques by modifying standard lab capillaries, the researchers scaled it up to hundreds of photolithographically patterned channels in parallel. “This really starts to produce lots of material,” Weitz said, although he cautioned that it would likely remain economical only for high value-added products such as pharmaceuticals.

As an example that has lower regulatory barriers to entry, he cited cosmetics. In particular, he cofounded a company called Capsum that markets a lotion containing microdrops of oil, similar to the larger emulsions often used in cosmetics. Over nine months, the company used a benchtop device to produce a million units

A very different materials-production application, which has not yet attracted much commercial interest, is analogous to spray dryers that create small particles. About half of drugs are hydrophobic, Weitz said, and the resulting smaller particles have higher bioavailability.

When he and his colleagues adapted their microfluidic structure technique to entrain droplets in air, they were pleasantly surprised to find that the shear stress broke up the drops into much smaller particles of drug. Moreover, the cooling and concentration of the drug produced by the rapidly evaporating solvent resulted in spinodal decomposition and amorphous drug nanoparticles, which dissolve even faster than nanocrystals.

Weitz also described the powerful capabilities of drop-based microfluidics for lab-on-a-chip applications in biotechnology, which he said is “probably more important than making materials.” Studying reactions in individual drops with 10-micron diameters uses roughly 10,000,000 times less material than is required for a well in a 384-well microtiter plate, allowing vastly more experimental variants. “It is this decrease in size that’s one of the real driving features,” he said, including the reduced noise that goes with it. In contrast to standard microfluidics, moreover, the reactants in a drop do not touch the channel walls.

The technology that Weitz and his team develop includes drop makers that encapsulate singe cells, electrically-driven picoinjectors that inject reactants into individual drops, and sorters that separate out cell-containing drops that have specific optical signatures.

The researchers also used their technology to create hydrogel beads with unique genetic “barcodes.” Weitz co-founded a small startup to supply these labeled beads to other researchers.

In one powerful application, the team inserted barcoded beads into drops alongside single cells. Breaking the cells open within the drop lets the researchers create DNA sequences that splice together the barcode for an individual cell with the sequences that are being actively transcribed into RNA in that cell. Even when the DNA from many drops is later mixed together, the sequences can be traced back to a specific cell that can be tracked through its barcodes. Such single-cell RNA sequencing “can be done in wells,” Weitz said, “but drops are simpler and quicker.”