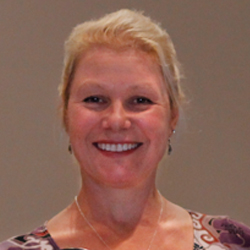 One of today’s materials frontiers is that of reducing weight while maintaining desirable mechanical properties, such as strength and ductility. The dilemma illustrated by Julia R. Greer of the California Institute of Technology in her Tuesday Symposium X presentation: Imagine, said Greer, a balloon that could float after having all of its air sucked out while maintaining its filled shape. Such a vacuum balloon, which could help ease the world's current shortage of helium, can only be made if a new material existed that was strong enough to sustain the pressure generated by forcing out all that air while still being lightweight and flexible. Unfortunately, light materials tend to be weak and susceptible to damage and tearing, whereas strong materials may be heavy and expensive. Consider two generations of airliners: The Boeing 787 weighs a bit more than half what a 747 does but uses 20% less fuel, saving billions of dollars in manufacturing and fuel costs. The inverse strength versus density relationship is a huge problem across every technology, from metals to ceramics to composites to polymers and elastomers to natural materials and finally to flexible polymer foams.

Greer’s solution is to create extremely strong, ultralight materials by capitalizing on the hierarchical design of three-dimensional architectures constructed from nanosized solids. Such structural metamaterials exhibit superior thermal, photonic, electrochemical, and mechanical properties at extremely low mass densities (lighter than aerogels), rendering them ideal for many scientific and technological applications. The nanofabrication process, illustrated for alumina samples, involves two-photon lithography of polymers, atomic layer deposition, and oxygen plasma etching to create a three-dimensional hollow final structure. The key to the enhanced properties is the nanoscale. For example, ceramic nanolattices with 50-nm wall thickness fail to recover after failure under stress but those with 10-nm wall thickness almost completely recover. The reason, it turns out, has to do with defects (flaws). For small thicknesses, it is possible to make nearly flaw-free nanostructures. As a result, the nanolattices lie closer to the theoretical maximum strength versus density line than any other material. Nonetheless, deformation creates residual micro-flaws that decrease the strength somewhat. To combat this limitation, inspired by natural materials like nacre, Greer moved to hierarchical structures. For example, single cylinders in a metamaterial became more like the familiar structure of a crane tower, which was effective in restoring the strength–density scaling by redistributing the load while also further decreasing the density.

Such experiments demonstrate that strength, toughness, and recoverability are controlled by the combination of architecture, nanomaterials, and microstructure, making it possible to design new classes of materials, but the dominant properties of such metamaterials, where individual constituent size (atoms to nanometers to microns) is comparable to characteristic microstructural length scales, are largely unknown because of their multiscale nature. In one example of a counter-intuitive property, Greer showed a representative load-displacement curve for un-notched and notched kagome nanolattices of alumina in uniaxial tension. Below a certain notch length, the samples always failed away from the notch, and the notched and un-notched samples both failed at the same peak loads.

Shifting to applications of these metamaterials, Greer turned first to lithium-ion batteries for electric vehicles. Battery researchers had hoped that silicon anodes would improve battery performance because of its high storage capacity, but silicon fractures under repeated charge-discharge cycles. However, an anode made by coating a copper nanolattice with ribbons made from silicon nanowires resisted fracturing under cycling. Moving to biochemical applications, Greer showed examples of nanolattice scaffolds for cell growth, tiny implantable batteries, and lattices chemically functionalized with DNA for drug capture or other molecules like fluorescein for fluorescence microscopy. Illustrating the promise of such materials, her group has also synthesized analogs to the hierarchical silica pore structure of diatoms. A test of the strength of a pore wall of an actual diatom showed that it is greater than any other biological material and approaches the theoretical maximum strength–density line.

Greer finished with a few words on scalability and promise. Last year, it took about 12 hours to make a metamaterial cube about 100 µm on a side, but this year, the speed increased about 72-fold, and with funding, researchers hope to move toward large-scale fabrication using roll-to-roll processes to print sheets of nanolattices for applications like ultra-lightweight damage-tolerant fabrics, including protective vests for soldiers. By carefully controlling atomic-level microstructure, nanosize-induced size effects, and the architecture, it should be possible to create metamaterials with properties and combinations of properties never possible before, she said.