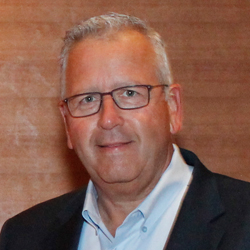 Plenary speaker Joseph M. DeSimone has been “on an extended sabbatical leave for going on three years” from his professorship at the University of North Carolina. He moved to Silicon Valley to serve as CEO of Carbon, a startup that is commercializing a novel, high-speed three-dimensional (3D) printing process for polymers that he and his colleagues developed.

“Despite all the excitement for 3D printing,” DeSimone observed, “essentially nothing has been produced at scale with 3D printing.” Carbon aims to change that by encouraging manufacturers to “stop prototyping and start producing” by designing parts on equipment that is capable of scaling up to full production.

The Continuous Liquid Interface Production (CLIP) process photoinitiates polymerization in a liquid resin by shining patterned ultraviolet light from underneath while a growing part is steadily pulled up out of the liquid. “The key to making this work,” DeSimone stressed, is that the fluoropolymer illumination window below the part is “not only transparent to light but highly permeable to oxygen.” It is well known that oxygen quenches photochemical curing, so the oxygen creates a continuously refreshed “dead zone” of uncured resin that extends for tens of microns above the window.

“The dead zone is a pretty complicated steady state,” DeSimone said, whose details depend on the resin, growth rate, part shape and other details.  “It’s too complicated for a human,” he said, so the company provides a complex algorithm to drive the printing. Each printer also sends detailed process information back to Carbon, and the company provides over-the-air software upgrades incorporating the collective experience of users as well as new resins and process enhancements.

The CLIP process can print material at meters per hour in some cases, limited by heat transfer and mass transfer. “It’s an exciting place to be,” DeSimone said. He also highlighted the smooth interfaces that result from the continuous process. Moreover, in contrast to conventional layer-by-layer 3D printing, “we have isotropic properties, which is important when you’re making mesh structures and lattices.”

The company has developed a wide range of resins for use in their printers. Although most polymers are not light-sensitive, DeSimone noted, “our approach was to use let to set the shape, but then use chemistry to set the properties. These resins are typically 10–15% light curable. The rest of it undergoes chain extension in the solid state under a baking cycle.” Varying the compositions “turns out to be a really valuable approach,” he said and lets the team “achieve properties that you couldn’t get from a light-based system alone.”

A wide range of materials have been tuned for the process, DeSimone said, including acrylics, rigid polyurethanes (including clear materials for microfluidics), flexible polyurethane, sterilizable cyanate ester, flame-resistant plastics, silicones, and elastomers. Carbon’s customers have developed various parts, including electrical connectors, specialized tools, aerospace components, gaskets, and biomedical components, and even new parts for the printers themselves.

Recently, Carbon has begun work with Adidas to make bespoke running shoes with matrices designed for a specific individual’s size, weight, and gait. “This will be the largest application of 3D printing by far,” DeSimone said. “Big companies are now pulling this technology forward.”

The Fred Kavli Distinguished Lectureship in Materials Science is sponsored by the Kavli Foundation.