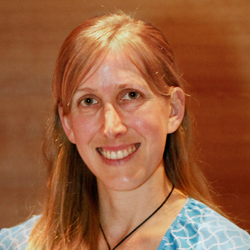 In her acceptance talk for the Outstanding Young Investigator Award on Monday, Jennifer A. Dionne of Stanford University described diverse studies of nanoscale materials that are relevant to applications.

Most of her talk described experiments on individual nanocrystals during intercalation, specifically hydrogen into palladium. But the results illuminate specific attributes of nanostructures that allow the rapid, high capacity, and repeatable intercalation of lithium ions in batteries.

Dionne and her team synthesized both single-crystalline and polycrystalline palladium nanoparticles and studied them in an environmental transmission electron microscope as they varied the hydrogen pressure at various temperatures. The transformation of the dilute alpha phase to the hydrogen-rich beta phase was evidenced by a 2-eV shift of the plasmon resonance in electron energy-loss spectra (EELS) as well as diffraction changes from the 10% volume expansion.

For both cube- and prism-shaped nanoparticles, Dionne noted, “we always have a very sharp transition between the alpha and beta phases.” In contrast, “bulk systems would ordinarily show a mixture.” Indeed, icosahedral nanoparticles showed less-abrupt transitions, which she attributed to the inhomogeneous strains in their polycrystalline structure. The level of hydrogen loading in the polycrystals also never reached that in single crystals; mapping the EELS signal across the polycrystalline nanoparticles showed that their core never fully transformed. The researchers also found that smaller nanocrystals transformed at lower hydrogen pressures.

The team tracked the transformation in time as it initiated at the corners and then propagated across the nanocrystals. As the transformation proceeded, Dionne observed, the diffraction patterns smeared, indicating imperfections. But “after the transformation, when the particle is fully hydrogenated, it goes back to a perfect single crystal,” even better than it started. These observations all support the known usefulness of nanostructured electrodes in batteries.

On a completely different topic, Dionne described nanoparticles for upconversion of infrared light to visible light. Her laboratory has previously explored this strategy for increasing the efficiency of photovoltaic cells and for improving biological imaging, but her talk addressed the potential for in vivo force imaging, which has many biological applications.

When the resulting nanoparticles are illuminated with infrared light, they emit in green and red bands whose relative intensity changes with pressure, depending on the specific nanocrystal in which they are incorporated. Dionne showed light signals from these nanoparticles after they had been consumed by the worm C. elegans, with color varying between organs in the digestive tract.

In yet a third topic, Dionne described a scheme for separating enantiomers of organic molecules, which often have profoundly different biological effects. The proposal depends on the molecules’ interactions with circularly polarized light. “Usually the wavelength of light is too large to initiate an optical handshake with something as small as a molecule,” Dionne said, but the effect can be enhanced using an optical fiber similar to a nano-coaxial cable.

Calculations indicate that the circularly polarized light will attract one of the enantiomers while repelling its mirror image molecule, potentially allowing purification. Although this experiment remains to be done, Dionne showed results from an atomic force microscope with a spirally-patterned tip, which confirmed the expected piconewton-scale forces that were repulsive or attractive depending on the polarization.

The MRS Outstanding Young Investigator Award recognizes outstanding, interdisciplinary scientific work in materials research by a young scientist or engineer. The award recipient must also show exceptional promise as a developing leader in the materials area.