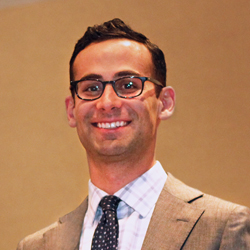 While the thrust of modern materials research emphasizes discovery of new materials with new properties, it turns out that many older materials studied in the past may exhibit surprising new phenomena for those who use innovative tools and knowledge to explore them in detail. So began James Rondinelli of Northwestern University in his Outstanding Young Investigator Award talk Monday evening, citing the example of complex transition metal compounds with flexible and adaptive structure types that result in an array of properties (dielectric, ferroelectric, magnetoelectric, antiferroelectric, antiferromagnetic, ferromagnetic, superconducting, and semiconducting). Moving into the theme of his talk, Rondinelli pointed out that subtle structural distortions, rather than being crystallographic curiosities, actually provide a means for controlling electronic function in transition metal oxides with two or more cationic sites.

For the rest of his presentation, he concentrated on understanding how atomic-scale structure–property relationships enable the discovery of new phenomena in ternary transition metal oxides. Chemical control over functional properties is obtained through chemical pressure or heterovalent substitution. The resulting local distortions control the electronic structure and material behavior. For example, changes in bond-lengths from strain can alter the onsite d-orbital energies, orbital occupancies, and crystal-field splitting, affecting metal–insulator transitions and electronic conductivity, while changes in bond angles control bandgaps, magnetic exchange, and critical temperatures. To show how such control can be realized, he gave two examples of how external perturbations to picometer-scale distortions of bond lengths and angles produce unanticipated phenomena in Ruddlesden–Popper oxides of the form An+1BnO3n+1, which were discovered in the 1950s.

The first example involved polar-to-nonpolar transitions from anharmonic interactions in the ferroelectric insulator Ca3Ti2O7, a Ruddlesden-Popper oxide with n = 2. Bulk Ca3Ti2O7 has a layered structure that incorporates a superposition of three main lattice modes that involve tilting of the oxygen octahedra, the rotation of the octahedral, and polar displacements of the calcium cations, and all three are needed for ferroelectricity, making it a so-called hybrid improper ferroelectric. In thin films, one would expect similar behavior, but Rondinelli’s group found an important difference: As strain increased, there was a phase transition to a nonpolar phase in which oxygen octahedral tilts were retained but the octahedral rotation sense changed about the film normal and the polar displacements switched to antipolar displacements. In sum, experimentally accessible biaxial compressive and tensile strains induced an unforeseen polar-to-nonpolar transition in thin films of Ca3Ti2O7, owing to strain-tunable oxygen octahedral rotation modes, a fundamentally different behavior than that observed in bulk materials.

The second example involved massive bandgap control via electrostatic chemical strain in (LaSr)AlO4, a Ruddlesden-Popper oxide with n = 1 and a wide-bandgap insulator. The idea is to use chemical order to induce large electric fields and drive local bond-length changes. Near-neighbor dipole–dipole interactions, either repulsive or attractive, will largely determine how individual units combine to form structures in the solid state. The equilibrium structure can be one of three polar, non-polar, and anti-polar variants, in each of which local structural distortions arise from internal local fields. These bond distortions and internal electric fields drive large band-structure changes with substantial bandgap differences between the three variants, all of which have the same chemical composition. Including many other possible structural variants of (LaSr)AlO4 that have been synthesized, it is even possible to run the gamut from metal to insulator.

Rondinelli’s bottom line: electronic function can be controlled in oxide heterostructures of various chemistries by exploiting anharmonicities of local lattice modes of the crystal. Epitaxial strain, chemical order, substrate geometry, and light (now being pursued at Northwestern) provide control of bond angles and lengths and offer a plentiful playground for realizing new functionalities with both static and dynamic fields in thin film and bulk form.

The MRS Outstanding Young Investigator Award recognizes outstanding, interdisciplinary scientific work in materials research by a young scientist or engineer. The award recipient must also show exceptional promise as a developing leader in the materials area.