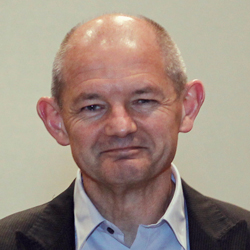 “In order to break new ground in science, you have to build new machines” has been a guiding principle in Joost Frenken’s research career, a principle he took to heart as a graduate student in the early-1980s when Heinrich Rohrer and Gerd Binnig published accounts of their scanning tunneling microscope which led to his career of developing and using scanning probe microscopes to understand what happens on surfaces in real time under realistic operating conditions. In his Innovation in Materials Characterization Award presentation Wednesday evening, Frenken argued that to study phenomena like phase transitions and diffusion, one must develop instruments that are fast enough to follow atoms as they move around and that operate over a wide range of temperatures. For surface reactions, as in catalysis, operation under pressure is another requirement. Frenken proceeded to describe three specialized instruments developed by his group (and now commercialized by a spin-off company, Leiden Probe Microscopy) that have these capabilities and demonstrated their performance with examples.

The first instrument Frenken described was a variable-temperature, video STM with a temperature range from 50 K to 1300 K that can keep the same area of a sample surface in sight while scanning over a range of 300 K with a frame rate up to 25 frames/second. Applying this instrument to the motion of indium atoms on a copper (001) surface, the group discovered that the atoms covered a considerable distance in a single jump and that the jumps were assisted by a “mystery” particle that turned out to be a copper vacancy with a very high jump rate of 100 million jumps/second at room temperature. As a result, the copper surface is in constant motion (the surface is alive, he said). Investigations of other metal surfaces revealed similar behavior, suggesting this was a general phenomenon. The same instrument was later used in an in situ study of two-dimensional nucleation and growth of graphene films on a rhodium (111) surface exposed to very low (10–8 mbar) pressures of ethylene at 975 K.

For catalysis, theoretical phase diagrams of systems like palladium (100) exposed to carbon monoxide and oxygen show a variety of surface structures as the pressures of the gases change from miniscule to enormous values. Joost’s group developed their ReactorSTM to cope with this pressure range while also varying the temperature. The basic idea is that only a small area of one surface and the STM tip are exposed to flowing reactant gases, while the remainder plus standard sample-preparation and characterization tools, including an x-ray photoelectron spectrometer, are in UHV. The commercial version also incorporates an atomic force microscope. Frenken’s group studied several reactions with the instrument, including carbon monoxide oxidation, Fischer-Tropsch synthesis, nitric oxide oxidation and reduction, hydrodesulfurization, and chlorine production. For example in the Fischer-Tropsch synthesis reaction on a catalyst surface at 4 bar and 483 K , the group found that hydrocarbon molecules with 14 carbon atoms tended to fill the surface, but subsequent layers comprised much shorter molecules because the first layer acted like “molecular Teflon” for the next and it was harder to grow long molecules.

To conclude his talk, Frenken switched to investigations of the interface formation in multilayer mirrors for EUV-optics, a much-discussed next-generation technology for keeping the integrated-circuit industry on track to maintain Moore’s Law of doubling chip density every two years. Such mirrors may comprise 100 layers of alternating molybdenum and silicon that collectively promote Bragg reflection for the easily absorbed 13.5-nm EUV wavelengths intermediate between ultraviolet and soft x-rays. Roughness at the interfaces, however, degrades the reflectivity. To study the interfaces as they were growing, Joost’s group developed the Depo-STM with a tilt and rotation capability that allows individual atoms to land between the STM tip and the sample surface. To their surprise, when depositing molybdenum on silicon, they saw damage to the surface as silicon atoms were removed and MoSi2 clusters formed, creating a rough interfacial region containing the clusters. For silicon deposition, the effect is less pronounced. Frenken also described studies of surface erosion of silicon due to 800-eV argon ion bombardment.

Joost W.M. Frenken received the Innovation in Materials Characterization Award for the development, application, and commercialization of high-speed, temperature-controlled, in situ scanning probe microscopy, leading to key insights in the structure, dynamics, and chemistry of surfaces and interfaces. MRS acknowledges the generosity of Professors Gwo-Ching Wang and Toh-Ming Lu for endowing this award.