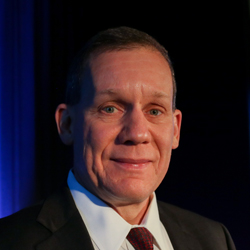 Charles Lieber of Harvard University is well known as a pioneer in the synthesis and application of nanowires, which earned him the 2016 Von Hippel Award. At his award talk on Wednesday evening, however, he highlighted his group’s recent progress toward interfacing electronics to living systems, using what he called polymer-like mesh electronics.

Lieber’s earlier work on semiconductor nanowires explored “bottom-up” fabrication, which exploits an understanding of atomic-level growth and organization to create complex structures, unlike the “top-down” patterning of integrated circuits. In particular, using nanoparticles to catalyze the growth provided a flexible platform for creating semiconductor nanowires whose composition could be controlled both along their length and in the radial direction.

Exploiting the control of nanowire properties led to simple logic circuits whose functionality was determined by crossed nanowires. Later advances in nanowire materials and hierarchical assembly allowed the group to develop two-bit logical circuits based on crossbar arrays of nanowires. “It’s starting to look like a processor,” Lieber said, but is still rather primitive in comparison with integrated circuits.

In parallel with these efforts, Lieber’s group used their nanowire expertise to electrically interrogate biological systems, for example using transistors formed at kinks in nanowires as sensitive, ultrafine probes. Such devices can also be chemically modified to achieve biochemical specificity.

These techniques, however, are constrained to using single probes of single cells, typically in a two-dimensional in vitro environment. For most of his talk, Lieber outline a vision of integration of nanoelectronics with a living brain, and initial steps toward that vision.

Ideally, such a system could measure and correlate activity across a wide range of length scales, from the 100-nm scale of synapses or even smaller to interconnected brain regions separated by centimeters. More importantly, tracking changes in neural circuitry requires measurements that are stable for months, Lieber emphasized. “Being able to follow things over time is one of the most important—and unmet—challenges in this field.”

Lieber said that all current probes, even the smallest carbon probes, are much stiffer than brain tissue, which results in scarring. “You can still record signals, but it’s not natural,” and tends to degrade over time. His group has developed the polymer-like mesh electronics, whose stiffness can be tuned to match the tissue by altering the geometry, which consists of polymer-encased metal wires crisscrossed with transverse polymer elements. Each wire is modified to form a sensor at a different position along its length.

To deliver this floppy structure into the brain of a mouse, Lieber’s team sucks it into a capillary as small as 100 microns in diameter and then injects it into the brain while monitoring the progress. Histology shows that the damage caused by the capillary heals over several weeks, and the cells and electronics appear to interpenetrate. Unlike stiff probes, no further repositioning is needed.

The researchers have demonstrated stable recording from as many as 64 individual probes. Single-neuron spike waveforms and firing rates were stable over months, opening the possibility of tracking changes during learning or aging. “That’s never been done before,” Lieber said.

In the future, Lieber suggested, this system could be used to induce signals as well as monitor them, potentially extending its impact from brain science to medical intervention. Finally, he showed that the flexible mesh can be placed across the curved retina of a living mouse and can identify the firing of direction-selective retinal cells.

It was clear from his presentation that Lieber sees the work so far as just the beginning. “Interfacing electronics to living system is a huge opportunity,” he said.

The Materials Research Society's highest honor, the Von Hippel Award, is conferred annually to an individual in recognition of the recipient's outstanding contribution to interdisciplinary research on materials. Charles M. Lieber was honored “for pioneering contributions to nanoscience, defining the foundations of rational synthesis of nanoscale wires, characterization of their fundamental physical properties, and the development of applications of these materials in chemistry, biology and medicine.”