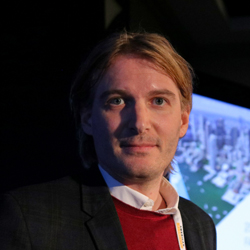 Andrea Alù, The University of Texas at Austin

Designer Matter—Fascinating Interactions of Light and Sound with Metamaterials

The past 15 years have seen revolutionary new ideas about the interactions of waves with matter. Assembling metamaterials that have emergent properties very different from their constituents promises negative–refractive-index lenses, invisibility cloaks, and other surprises. But practical applications that show these effects over large scales have been slow in coming, said Andrea Alù of the University of Texas at Austin, the recipient of the Kavli Foundation Early Career Lectureship in Materials Science, in his talk on Thursday.

These exotic structures tend to have high losses and limited bandwidth, lack reconfigurability, be nearly linear, and be limited by symmetry constraints, Alù said, but his group has been varying additional parameters to extend the possibilities. Their extensive results include theory and simulation as well as acoustic, radio-frequency (RF), and optical experiments.

In one example, Alù described patterning tiny structures on multi–quantum-well structures to enhance and control their nonlinear properties. The results showed efficient wavelength conversion for a mirror that was one-twentieth of the wavelength, avoiding the usual challenges of phase matching for exploiting nonlinear processes.

A large part of Alù’s presentation addressed reciprocity, which means that the strength of wave propagation is equally strong when source and detector are swapped. A well-known theorem concludes that this always occurs if the medium is symmetric, time-invariant, and linear. Current nonreciprocal devices, such as isolators that protect lasers from back-reflection, exploit magnetic materials that break time-reversal symmetry, but because magneto-optic effects are weak, these devices tend to be large.

A magnetic field breaks the degeneracy between clockwise- and counterclockwise-traveling modes in a circular cavity. Alù’s team produced the same effect in an acoustic cavity by introducing fans to spin the air in a circular acoustic waveguide. They achieved 40 dB isolation with an air speed that was only a tiny fraction of the speed of sound. A similar effect is expected for light in ring waveguides by introducing a modulation that moves very rapidly around the ring to replicate the effect of a moving medium.

In addition to allowing compact isolators and circulators, the breaking of time-reversal symmetry allows an analog of the topological insulators that have generated tremendous excitement in condensed-matter physics. Specifically, a lattice of symmetry-broken rings will support a mode that propagate in only one direction around the edge of the lattice. Such topological modes are insensitive to the details of how the lattice is terminated, because there are no corresponding modes for scattering into the bulk or in the reverse direction.

Alù showed that introducing a moving modulation in a planar surface avoids reciprocity for free-space modes as well, enabling absorbers such as photovoltaics that do not emit or antennas that transmit without receiving.

Another approach for breaking reciprocity exploits nonlinearity. Among other results, Alù and his co-workers constructed an array that acts as a topological insulator for high intensities of RF.

Using a single nonlinear resonance to create asymmetric propagation imposes a fundamental penalty with insertion loss, Alù and his colleagues have shown. However, by using a pair of resonances they designed an isolator that is fully transmissive in one direction and fully reflective in the other, which they verified in an RF structure.

Alù also described a strategy for cloaking that uses an active medium to cancel scattering and to fill in the shadow of an object. This technique avoids the tradeoff that limits the useful bandwidth of a passive cloak of a particular size. Applied to two planar surfaces, one with loss and one with gain, this method provides a way to achieve negative refractive index.

With these and other diverse examples, Alù showed that there are still many opportunities for novel manipulations of wave propagation.