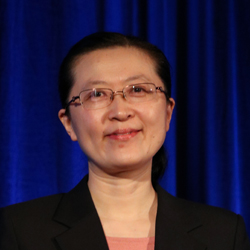 To begin her Wednesday Symposium X presentation, Bin Liu reminded her audience of the widespread uses of luminescent materials in today’s world, including display devices, labels for cellular imaging, and light-emitting (LED) lighting. But at high concentrations in aqueous or solid-state environments, many molecules, such as fluorescein, which is widely used in biochemical research and medical diagnosis, naturally aggregate, which causes them to quench their own luminescence. Fortunately, for some molecules, there is the reverse effect, discovered in 2001, in which solutions that are non-emissive at low concentrations become emissive at high concentrations. The working mechanism for this aggregation-induced emission (AIE) is the restriction of intramolecular motion. For example, in tetraphenylethene at low concentrations, rotation of the molecules’ rotor-like structures provides a non-emissive route to dissipating the energy of excited molecules, quenching the fluorescence, whereas at high concentrations, this motion is hampered, and fluorescence emission predominates. A similar effect occurs via restriction of intramolecular vibration in other molecules, and additional motions may also come into play. Liu also noted that other explanations for AIE are being explored, as well.

Molecules exhibiting AIE are called AIE fluorogens (AIEgens), and researchers have now developed a series of molecules that cover the visible to near-infrared spectral range that are candidates for high-tech applications. Under the motto “AIEgens: united we stand; together we shine,” Liu grouped a wide variety of possible uses for these materials, but she focused her presentation on the design and synthesis of multi-functional AIEgens for use as bioprobes for sensing, imaging, and other biomedical applications. In what Liu called an AIE light-up probe, for example, the AIEgen is linked to recognition elements that bind to the target species, such as proteins, so that the AIEgen motion is restricted and it becomes emissive. Liu illustrated the use of an AIE light-up probe to monitor in real time cell apoptosis, a natural pathway for cell death that can occur when drug molecules are introduced. In this case, the AIE does not occur until the apoptosis occurs, which causes cleaving of the probe structure and subsequent aggregation of the AIEgen.

With the design of appropriate probe structures, this approach opens the way to screening drugs and monitoring their concentrations, tracking drug delivery and activation, and rapid, in situ monitoring of the therapeutic effect of a prodrug (a medication or compound that is metabolized within the body into a pharmacologically active drug). It was even possible to design a probe that could simultaneously monitor delivery, activation, and therapeutic effect of a drug. The next step was to integrate other functionalities, such as the production of singlet oxygen, into the AIEgen molecule itself, so that relatively simple molecule could offer, for example, sensing, imaging, and therapeutic capabilities. Liu illustrated this approach with examples of activatable, photodynamic cancer cell ablation and sensing and photodynamic ablation of bacteria.

Liu then switched to describing AIE dot probes, nanoparticles comprising a core of AIE molecules and several functionalities on the surface tailored to a variety of applications. They have high physical and photo stability, excellent biocompatibility, and high brightness, on average 40 times that of quantum dots, making them excellent tools for non-invasive procedures over long tracking times. She illustrated these capabilities with tracking stem-cell therapy in mice, tracking blood-brain barrier leakage, ultramicroscopic whole brain imaging, and image-guided surgery and therapy (again in mice). Aggregates tend to be amorphous rather than crystalline, but the latter are brighter emitters because molecular motion is more restricted. Liu described a way to convert the amorphous aggregates to nanocrystals my means of a seed crystal in an aqueous solution of amorphous aggregates. As particles from the aggregates migrated to the seed crystal, ultrasound was used to dislodge crystalline nanoparticles from the growing seed crystal that remarkably retained the size of the amorphous aggregates.

Liu ended her presentation by noting the rapid growth, nearly exponential so far, in the number of publications and citations in AIE research since their discovery in 2001. For those interested in trying AIEgens in their own research, she said that a National University of Singapore spin-off company, LuminiCell, with cell and vascular labeling products, would be happy to provide free samples to get them started; just contact her.