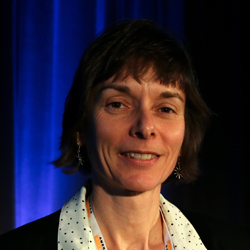 At Thursday’s lunchtime Symposium X talk, Nicola Spaldin conveyed her enthusiasm for the field of multiferroics—materials that combine two or more of the primary ferroic order parameters—ferromagnets, ferroelectrics, and ferroelastics—simultaneously in the same phase. Piezoelectrics are an example of multiferroic materials.

Spaldin noted the scarcity of materials exhibiting both ferromagnetic and ferroelectric behavior. Coexistence of these two properties could result in single-component inductors or capacitors, or integrated dielectric/storage devices.

Taking the idea one step further, magnetoelectric coupling would lead to electrical field-based control over magnetism—the “holy grail” of the field from a technological point of view. Spaldin cited “frightening” projections of annual information technology consumption in the decades ahead suggesting IT will consume 50% of the world’s energy by 2030 if scientists do not come up with entirely new device paradigms.

“if we want to keep information technology consumption to what is it today, around ten percent of world energy consumption, not even Moore’s Law scaling will suffice—we have to come up with new ideas for devices based on new materials,” noted Spaldin.

Although the term “multiferroics” did not appear in the scientific literature until a 2000 publication by Spaldin, Russian scientists Lev Landau and Evgeny Lifshitz had introduced the concept of magnetoelectrics in the 1960s. The search for magnetic ferroelectric materials took much longer, because the chemistry that promotes one functionality—filled or empty d-orbitals—often prohibits the other.

The multiferroic researcher community has come up with several approaches to address this contradiction. For example, two cations—one magnetic, one ferroelectric—can be used in a transition metal oxide to combine the two properties in one material. (This is “the least clever approach, and I can say that because it’s the way I worked on it,” Spaldin said.) Transition metal oxides are ideal because they are stable and have strong correlations between electrons.

Spaldin went on to discuss promising systems with the potential for multiferroic properties, including BiFeO3­, which her group has extensively studied with her long-time experimental collaborator Ramamoorthy Ramesh at the University of California, Berkeley. Another potential route is to make a composite multiferroic, made of alternating layers of ferroelectric and ferromagnetic materials, where the coupling is mediated by strain. Darrell Schlom’s group at Cornell University achieved this concept with “designer multiferroic composites” in the lutetium iron oxide system.

Lastly, Spaldin discussed her intriguing work in using multiferroics to understand cosmology. By studying the ferroelectric domain structure of yttrium manganese oxide, she determined the meeting points of these domains in the oxide are actually one-dimensional strings. What’s more, the structural phase transition in multiferroic YMnO3 provides an exact mathematical analog to the formation of cosmic strings in the early universe.

Spaldin now collaborates with cosmologists—previously “thwarted by their inability to replay the Big Bang,” joked Spaldin—to study the early universe. By cooling YMnO3 at different rates through the structural phase transition and counting how many domain intersections form, the team can simulate expansion at different rates across the “Grand Unification Transition.”

For the students and early-career researchers in the audience, Spaldin discussed how she became interested in multiferroic materials, when she and a fellow postdoc at Yale University pondered the idea of a material being both ferroelectric and ferromagnetic. A weekend’s worth of library research unveiled no such material.

The quest to find multiferroics became Spaldin’s “obsession,” and she made it an integral part of her research when she became an assistant professor at UC Santa Barbara. The moral of the story? “Don’t neglect drinking coffee with your colleagues—it’s very important!”

“It’s exciting to be involved in a field from the very beginning, watching it evolve, sometimes being able to nurture the field in the direction you’d like it to go, and seeing it blossom into directions I hadn’t envisaged,” she said.